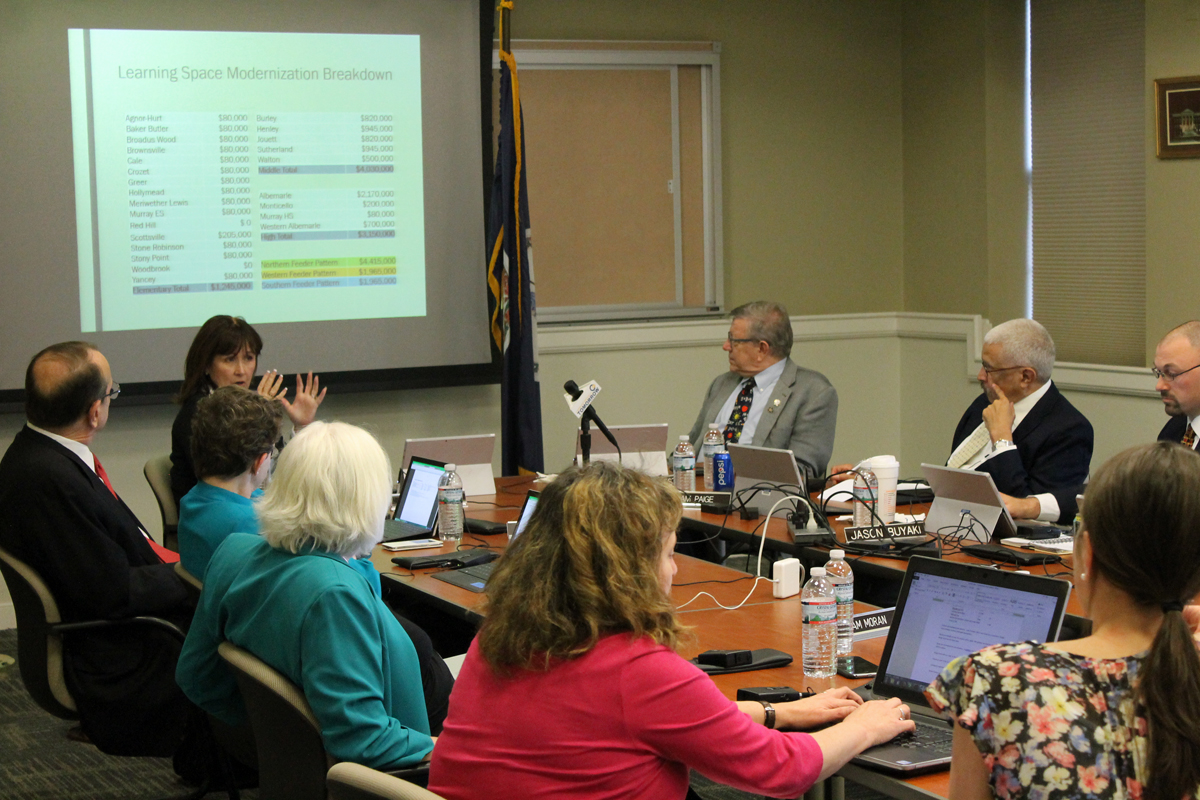 Albemarle County School Board members discuss which projects to include on a possible November bond referendum.

The Albemarle County school division hopes to fund $35.5 million worth of capital projects in 2017-18 and 2018-19 through a proposed bond referendum this fall.

The Albemarle School Board on Thursday voted, 6-0, to approve a preliminary list of projects to inform the Board of Supervisors’ April 13 decision on the referendum. Board member Jason Buyaki abstained.

The division will finalize its requests before the supervisors make a final call in May on which projects would be included on the referendum.

The learning space modernization money would be spread across the division by number of students, said Rosalyn Schmitt, county schools assistant director of facilities planning.

Under the plan presented Thursday, most elementary schools in the county would receive $80,000 for classroom modernization. The exceptions are Scottsville Elementary, which would receive $205,000.

Middle and high schools would receive more funds, a staff report showed. County middle schools all would get at least $500,000 for modernizations. At the high schools, funding ranged from $80,000 at Murray to $2.1 million at Albemarle High.

Woodbrook and Red Hill elementaries are not expected to receive classroom modernization funds. Woodbrook is expected to get an addition, and Red Hill already is slated to be renovated in next year’s proposed capital improvement program.

Another $500,000 is earmarked to study solutions to overcrowding at Albemarle High School. Buyaki said he did not agree with money for high school planning being in the bond referendum.

“I am uncomfortable asking for high school planning of half a million dollars,” he said. “Asking for a loan … when that should fall within our normal operating parameters.”

Staff responded that planning to relieve overcrowding at AHS is part of the capital process.

“I would have some heartburn not including on a bond referendum one of your most critical needs,” Schmitt said.

Board member Steve Koleszar expressed concern that specifying the bond money would be for a science lab could cause problems during the building phase.

“My worry is that we will sell this as modernizing science labs, but then the school might say [another] need is actually greater,” he said. “I want to make sure that at the site level they have plenty of input and we do not put them in a strait jacket.”

Buyaki said he is uncomfortable approving the list of projects without a more specific breakdown of what the money would be spent on.

“This is a great snapshot, but I want the details. No detail is too small,” he said. “We should be very specific about what we would spend this money on. That’s just a normal part of transparency.”

Board Chairwoman Kate Acuff said details will be made available before the supervisors make a final decision on the referendum.

The last bond referendum before Albemarle County voters was for the construction of Western Albemarle High School, which opened in 1977.