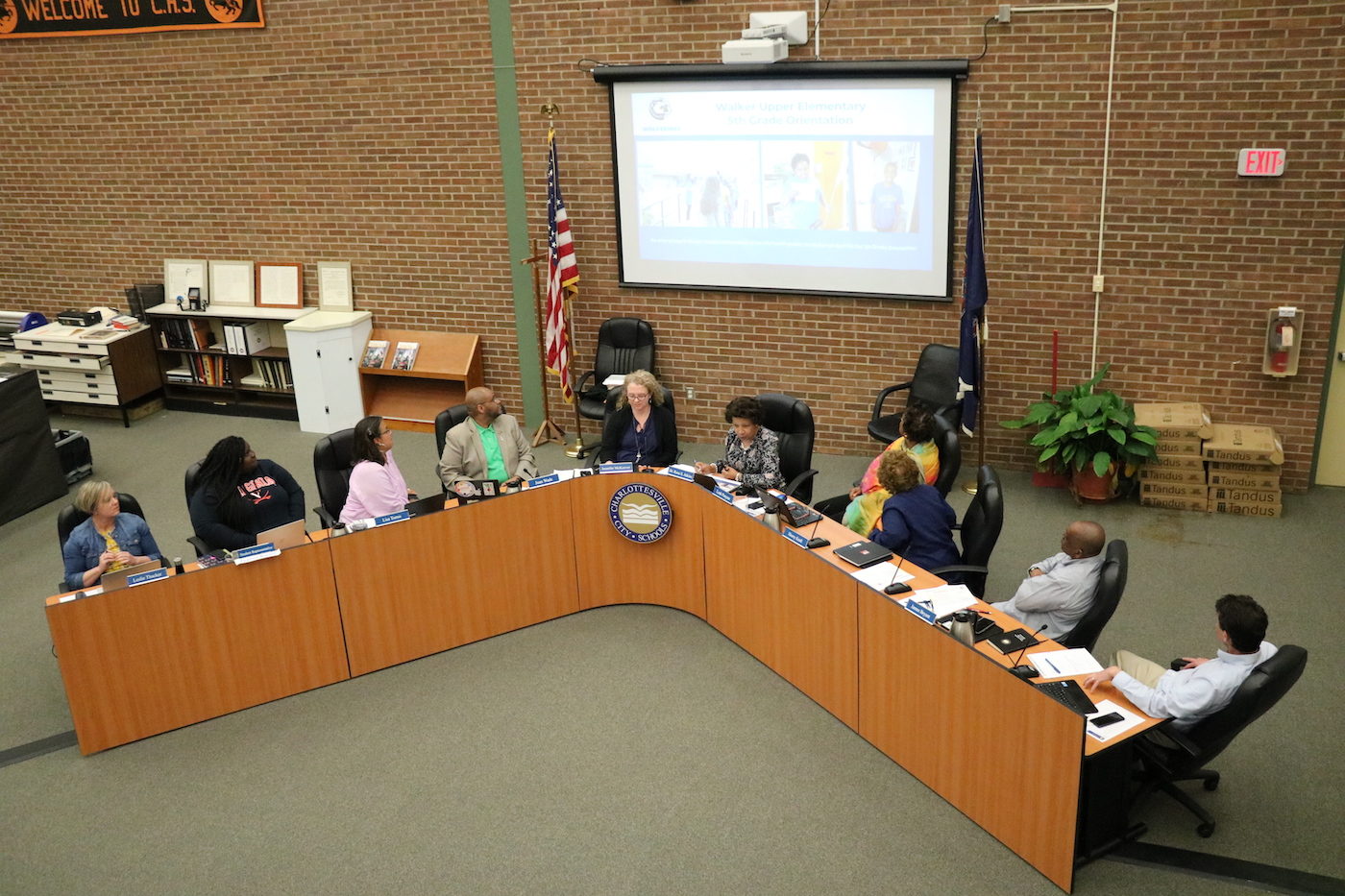 A 2019 meeting of the Charlottesville School Board.

Viewership of online local school board meetings has routinely reached into the thousands throughout the past year — a trend that school board leaders say could be attributable to the meetings’ virtual format or to the hotly-debated issues being discussed.

The Albemarle County School Board meetings prior to last March usually garnered 30 attendees, Board Chair Graham Paige estimated. Since the meetings moved to Zoom, attendance has tipped into the thousands.

Charlottesville School Board Chair Lisa Larson-Torres said that she’s likewise noticed increased public comment from community members and teachers. The division’s Facebook livestreams of the board meetings have brought in between 1,500 and 3,000 viewers each month since moving online.

CCS and ACPS are still looking for ways to promote greater community engagement with board meetings when they resume in-person.

Larson-Torres said the Charlottesville School Board is considering different avenues for the future of its public meetings. She hopes to give community members the choice to call into meetings remotely — an option for which CCS’ technology department is exploring possible equipment.

ACPS spokesperson Phil Giaramita predicts that board meetings will similarly continue to include an online component.

“In this day and age where there are so many two-income families, for someone to take a couple hours out of a weekday night to get in the car, go to a meeting, stay for another couple of hours and then go back home — some folks just don’t have that amount of time on their calendars,” Giaramita said.

Larson-Torres noted that meetings’ virtual format means parents can share opinions on School Board decisions while eating dinner or managing childcare responsibilities. On the other hand, she said the board has been making some “pretty big decisions lately” — like formulating school reopening plans — which could be responsible for increased turnout.

Students may also feel more confident speaking before the board virtually, Larson-Torres added.

“We have actually had students pop in for different topics, and that’s a tough thing to do,” Larson-Torres said. “It may be easier for the kids to do it virtually, too, because they’re not having to come up to the podium. That would be nerve-racking when we used to hold the face-to-face meetings.”

Paige recalled strong student input during the School Board’s discussions about the division’s plans for in-person winter athletics. In a November board meeting, one Western Albemarle High School student Zoomed in from the locker room during basketball practice to comment on the plans.

“The athletic communications — especially from the students — I think that did influence our vote, in a sense, because that really let us know how much the students really were missing that component within their lives given also the fact that they really couldn’t be in school in-person at that point,” Paige said.

Paige said the board wants to “truly hear from all of [its] citizens” — a level of feedback that he said would “make sure that we are delivering the best services that we can deliver to all the kids in the system.”

Giaramita said the division has been exploring ways to get greater feedback from families who have “traditionally not been represented in school board meetings.”

Last month, ACPS Superintendent Matt Haas conducted online town halls with Latino and Black families in the division to gather input on how they’ve been impacted by the pandemic. The town hall model is one that the division plans to continue after the COVID-19 pandemic.

To aid families in city and county schools without adequate internet access, both CCS and ACPS distributed hotspots to those who needed them.

For multilingual families, ACPS holds monthly technology support nights, and Giaramita anticipates that ACPS will make greater use of language interpreters during its future meetings.

“Our students come from 80 different countries and they speak different languages in the home, so we have a long way to go in terms of diversifying our messaging so that we’re reaching every family and every family feels welcome being engaged,” Giaramita said.