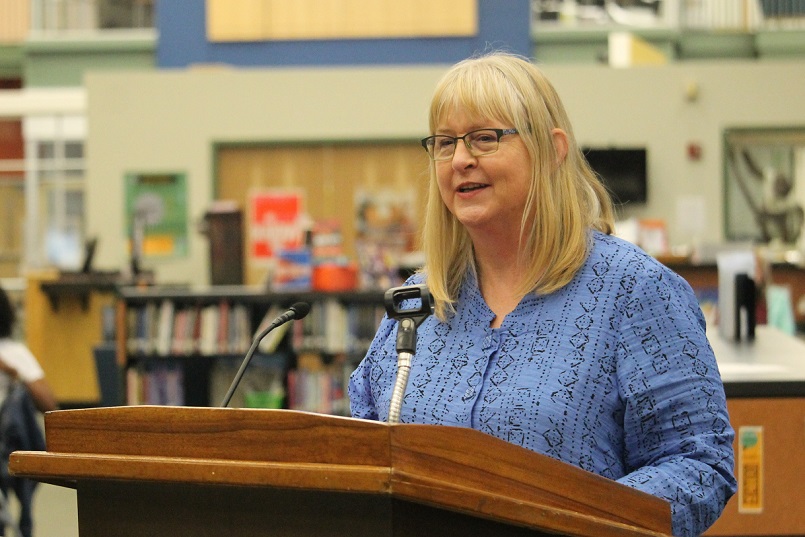 Patricia Jennings, an associate professor at the University of Virginia’s Curry School of Education, told the Charlottesville City School Board about ways teachers can benefit from being mindful of their emotions.

Initiatives to support the wellbeing of students and teachers took center stage at the Charlottesville City School Board’s meeting on Thursday.

Division and Johnson Elementary School staff gave the School Board an update on the implementation of Positive Behavioral Interventions and Supports (PBIS) in the city’s elementary schools.

PBIS provides a framework for schools to teach behavioral expectations in the same manner as a core curriculum subject.

A representative team from each elementary school in the city has chosen a set of key behavioral expectations for its students. The schools also have identified concrete examples of what each of these expectations looks like during different parts of the school day.

“We ask kids to approach things with a growth mindset, and we try to do the same,” Thompson said.

Maelys Croce, a third-grade teacher at Johnson, said the school was planning a targeted PBIS intervention for children who act out to get attention from their classmates.

School Board member Leah Puryear asked how parents of the targeted children would be informed about the intervention.

“How do you help them when they ask, ‘What is it that I need to do to encourage my child?’” Puryear said.

“That is a major growth point for us,” said Thompson. “When you get into confidential data … you want to figure out the best way to communicate with parents while protecting privacy.”

The School Board also heard from Patricia Jennings, an associate professor at the University of Virginia’s Curry School of Education who recently helped Buford Middle School teachers to become more mindful of their emotions while interacting with students.

“We didn’t teach them to teach any differently — we just taught them how to calm themselves down,” Jennings said. “It’s really easy for teachers to misperceive what is happening in their classroom … and overreact to behaviors.”

“We tell students to calm down and pay attention, but we rarely give them those skills,” she said

Superintendent Rosa Atkins said that the school division would offer a mindfulness workshop for 40 to 50 teachers this summer.

Christa Bennett, the mother of a third-grader at Jackson-Via Elementary School, commented twice on the practices of weighing students in gym class, and taking away recess to discipline students.

Bennett said that Jackson-Via kept students in an indoor “Recess Academy” when they forgot homework or misbehaved. She cited a 2013 report by the Institute of Medicine that found that children who are more active show greater attention, have faster cognitive processing speed and perform better on standardized tests.

“Recess Academy is additionally problematic because the kids who ‘act up’ in class may be the ones who would most benefit from physical activity,” Bennett said.

James Henderson, associate superintendent for curriculum and instruction, said that the city schools’ Student Health Advisory Board had recommended recess-based punishments to be phased out in the city’s elementary schools this year.

Henderson added that this form of discipline conflicted with the philosophy behind PBIS.

Bennett said that a paper record of students’ weights had been left somewhere visible in to daughter’s P.E. class at Jackson-Via.

“There is such a disconnect between what is happening on the ground and what the School Board is aware of,” Bennett said.

“It comes down to what policy says and what’s in practice,” School Board Chairman Juandiego Wade said of recess-based punishment. “I think there is a gap there.”