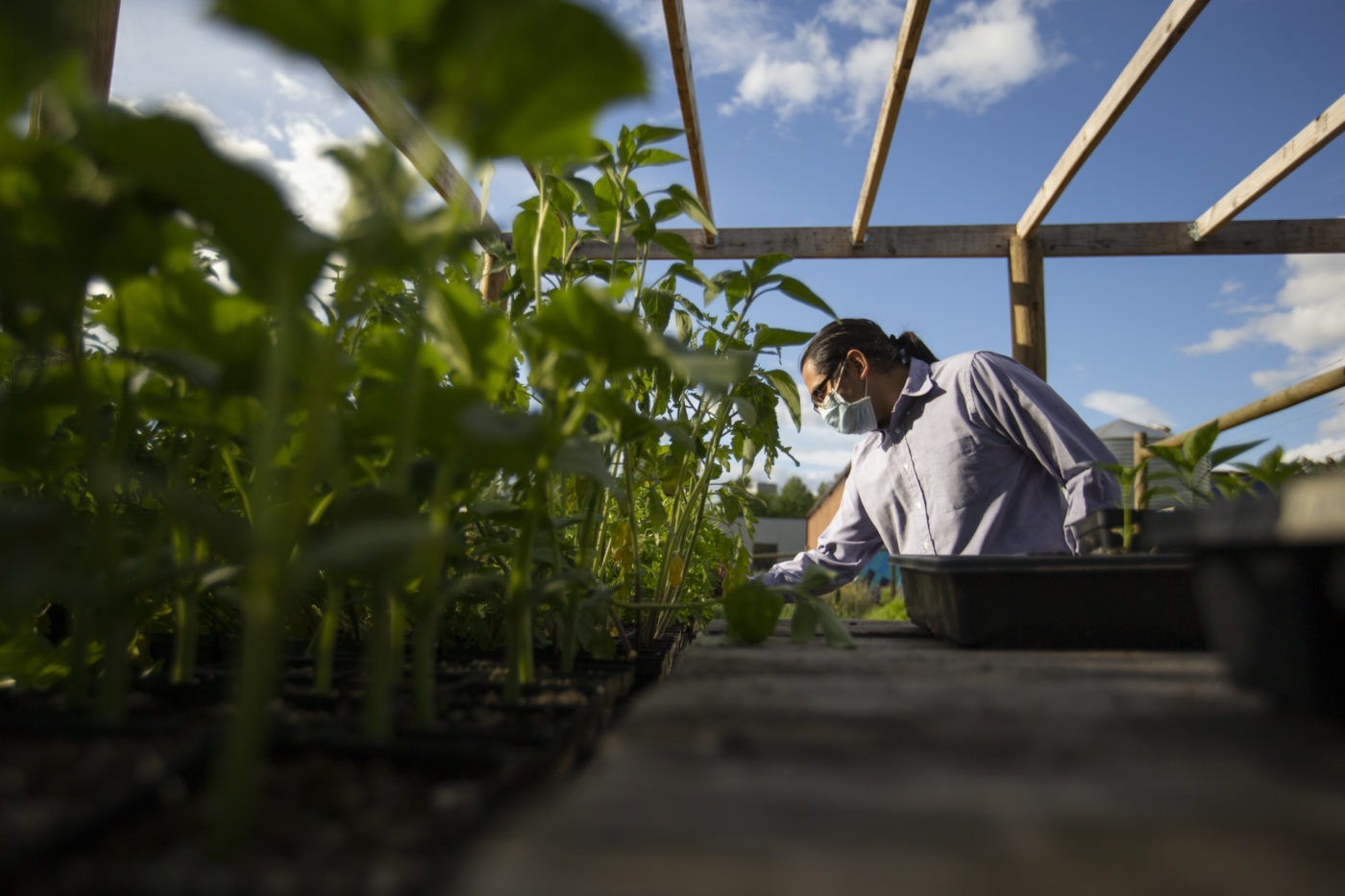 Students are engaged with the garden in many ways, including partnering with elementary teachers to get students out in the garden, where a classroom would do planting activity, harvesting and cooking. At the high school, for instance, students can take specific classes, like urban farming.

How are graduating high school seniors transitioning to college during the COVID-19 pandemic?Parents are finding new ways to teach their kids at home

Leon Nuñez was exposed to topics on how food can affect the body while attending Buford Middle School in Charlottesville, which made him mindful about choosing healthy food. But the first time he was introduced to food justice was during his internship in high school with the City Schoolyard Garden.

Those experiences contributed to him pursuing biology at the Piedmont Virginia Community College. By working with fellow interns, such as talking about projects involving food justice, Nuñez said he naturally developed leadership skills.

He’s far the only person instilling knowledge about food justice in Charlottesville, which 1 in 6 people is food insure. Through internships and advocacy work, the youth and residents are being educated on not only food choice but how to advocate about the issue that affects them. 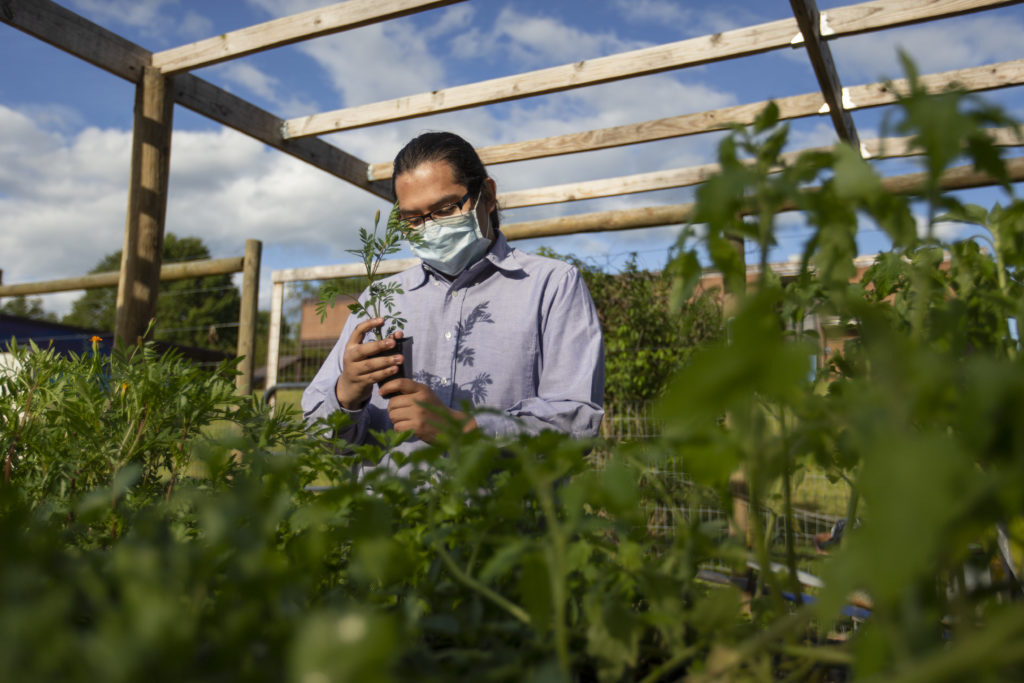 Launched nearly a decade ago, the City Schoolyard Gardens operates on the grounds of various city schools and reach nearly 3,500 students that help students build knowledge and understanding about where food comes from.

In Charlottesville, 17% of people face food insecurity, compared with the state average of 11%, said Bingham, adding that the pandemic will worsen existing inequities.

“While donated meals certainly will not solve all of the issues surrounding hunger in our community, they may help a family have access to food during this unprecedented quarantine,” she said.  “… Our hope is that this work will further shine a light on the urgent need to address food insecurity on a systemic level and energize a new coalition of activists to push for real systemic change.”

Launched nearly a decade ago, the City Schoolyard Gardens operates on the grounds of various city schools and reach nearly 3,500 students that help students build knowledge and understanding about where food comes from.

Jordan Johnson, garden team manager and health advocate, said understanding and exploring these gardens allows students to get more connected to the foods they are eating, adding that he also uses the space to talk about the food system as a whole.

“We do leadership opportunities to help push division students into the work that we are doing, so we have initiative where we have students getting a clear understanding on food by growing seedlings for the community,” Johnson said.

Students are engaged with the garden in many ways, including partnering with elementary teachers to get students out in the garden, where a classroom would do planting activity, harvesting and cooking. At the high school, for instance, students can take specific classes, like urban farming. 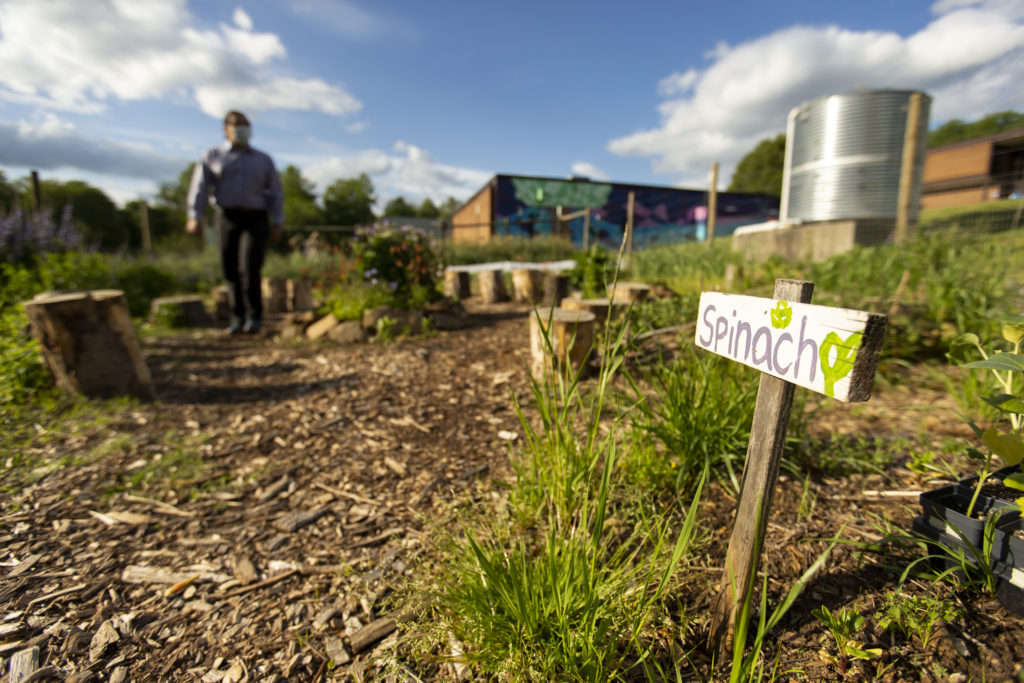 On May 7, Frontline Foods Charlottesville, Cville Community Cares and Charlottesville Democratic Socialists America announced they would feed people in need.

But the gardens are more than just an avenue that educates students how to grow healthy foods. There are many issues that contribute to food inequities, Johnson said, including transportation, grocery stores, housing and schools and land ownership.

“The students of color will step out of that garden program and see the system that we are glorifying has a deep history of oppression and manipulation of their families and people who look like them,” Johnson said. “They’ll see a system that was built by Black and brown Americans that continually turns its back on the needs of the people who built it.”

Over the years, Johnson said there’s been a lot of momentum within City Schoolyard Gardens around exploring how racial equity is a component that influences food access in Charlottesville.

Though students have been engaged in the garden, that’s not enough to create food equity, Johnson said. He suggested instilling certain skills in children can help foster them as leaders, including giving them avenues to question the food system.

“It is our job to show students who grow their food, who owns the grocery stores, who decides what is sold in those stores, and who makes their lunches every day in the cafeteria,” he said. “We need to encourage them to think about what this means for them.”

The Healthy Schools Initiative — which would allow students to work on increasing healthy meals in the school in the next five years —  is one of the ways that these goals to help these children can be met, Johnson said.

“We are working to build an outline for a student-led initiative: including student-led surveys, taste tests and feedback loops to help guide changes in the school nutrition program,” Johnson said.

Tamara Wright, the community advocate lead of the Food Justice Network, works with community members while empowering them to navigate the food system and to be able to advocate for themselves. While doing that, the youth also gets to collaborate with them and work as a leadership model.

One way Wright said she collaborated with the youth interns was by presenting at the national Community Food System Conference.

“We did a presentation on how we were able to work with the community to empower folks in food justice,” Wright said.

Over the summer, Wright said she also collaborated with the youth to present at the School Board in an effort to serve better lunches and fresh foods for students. Some of the issues include the breakfast containing too much sugar or preservatives.

Wright’s work with the intern also includes explaining how food deserts are affecting people, such people having to travel far for better food quality. That led the students to be able to present to the City Council about food insecurity in Charlottesville.

Wright said it’s important to collaborate with the youth because it’s an opportunity to learn from one another.

“When we first decided to work with the youth interns, I was a little nervous because the individuals in the advocacy program are adults [but] it was amazing. We learned from them, and they learned from us,” she said.