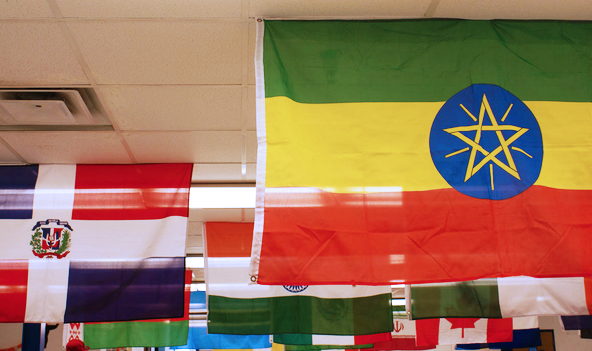 Just before the morning bell silences homeroom classes at Charlottesville High School, 31 different languages buzz in the air. In neighboring Albemarle County, a homeroom might burst with any of the 79 languages spoken in the public schools.

“We’re so fortunate that Charlottesville is a welcoming community for refugees,” said Harriet Kuhr, executive director of the International Rescue Committee. “Refugees fleeing from persecution find this to be a safe and comfortable place to live and raise their families.”

Located in downtown Charlottesville, the International Rescue Committee has made the city one of 22 in the nation to receive refugees from countries as diverse as Bhutan, Myanmar, Afghanistan and Colombia.  As a result, both local school divisions have a significant refugee population supported by specialized English language programs.

The IRC works in 40 countries to resettle people who have been displaced by violence or disaster. Additionally, the IRC works to help refugees find mental health and medical support. Locally, this means working with refugees to place them in homes, jobs and schools.

In Albemarle, the IRC has placed newly arrived refugees in the University Heights apartment complex, which is just across the County line but with access to public transportation into Charlottesville.

“We have to place newly arrived refugees on the bus lines, so we don’t go too far into the County,” Kuhr said, adding that they want to diversify the housing opportunities.

Apartments along Angus Road, Hydraulic Road, and Commonwealth Drive have also seen a boost in refugee occupants. Kuhr said that residents in those areas have typically spent the past year or more in the United States.

While Kuhr and the IRC focus on welcoming the residents and connecting them to their new communities, the school division’s take on the responsibility of educating the families’ children for the rest of their academic careers.

“From our point of view, we really focus on people when they first come,” Kuhr said. “For schools, they’re accumulating and keeping people for five or six years.”

Impact on the Schools

The IRC and the school systems work together to support students as they are immersed in American culture and the English language.

In the past 10 years, the number of refugee students in Charlottesville’s schools has grown to a total of about 200 students in the last school year.

“They come in with great enthusiasm and significant challenges depending on how much education they’ve received from their country of origin, how long they’ve been in a refugee camp and the trauma that they may have experienced,” Catlin added.

The refugee population in Albemarle schools is smaller, about 114 students, but still a significant group. County schools have enrolled 90 new students in the past two years. Refugee students make up about 13 percent of the county’s English language learners.

In both the City and the County, English language learners are simultaneously integrated into the student body and given support in smaller, ESL-only settings designed to help students acclimate to life in the United States.

“When students come in and speak no English at the high school level, typically about half their day will be in an ESL class with an ESL teacher and other ESL students focused specifically on learning English,” said Russell Carlock, Albemarle’s international and ESOL program coordinator.

“The other half of the day is going to be in electives,” Carlock added. “They have an opportunity to participate fully, and then also create those social relationships with the native English speakers that are important to feeling a part of the school.”

In both County and City schools, students move fluidly between specialized ESL classes and traditional classes such as homeroom, physical education, art and other electives.

“In general, the younger the child, the better they do,” Kuhr said. Students who have more time to progress through the English Language Proficiency (ELP) levels before high school graduation experience the full scope of the English language learner programs.

“The one issue that we always struggle with is what to do with older kids who come with a big educational deficit,” Kuhr said, citing cases of interrupted schooling that may place a student behind grade level.

However, Carlock said that age is not necessarily a definitive predictor of success, noting that as students progress with English, they start to spend more time in mainstream classes earning graduation credits.

“This happens at the high school and middle school level extremely quickly,” Carlock said. “Kids work extremely hard in order to meet the same graduation requirements that all other students in the state of Virginia are expected to meet, but then also learn a second language on top of that.”

All students enrolled in Virginia’s public schools are held to the Standards of Learning. This means that like traditional students, English language learners are also required to take the SOL exams.

While the SOLs cannot be given through an interpreter, English language learners may be able to take modified exams, such as a plain English version of the math SOL test.

“On a case by case basis, we determine the accommodations that are available,” said Catlin, citing English proficiency and time spent in the United States as possible reasons for accommodation.

Still, Catlin emphasized that accommodations were an exception rather than the rule.

In addition to state SOL tests, Virginia is one of 33 states that requires an annual English language learner’s assessment known as ACCESS for ELLs.

The exam divides K-12 students into five clusters based on grade level, testing their knowledge of social and academic English language. Test scores are used to place students into the five language proficiency levels.

Students are expected to advance one level for each year spent in American schools, which becomes challenging if a high school student is placed at a low level of proficiency.

At the lowest proficiency levels, English is very basic, and depending on a student’s country of origin, he or she may also need to be taught the Latin alphabet.

“You can’t just put a textbook in their hands,” Catlin said.

The highest proficiency level indicates that a student is nearly at grade level and is expected to reach proficiency within the next year.

English language proficiency is not the only measure of success. Refugee students often need support to adjust to a new culture with unfamiliar foods and customs.

“It’s not just about teaching the academics,” Catlin said. ”It’s about connecting with the family, the culture of the community and the IRC, and trying to create a network of support for the student.”

In the City, Catlin explained that ESL teachers work in classrooms where students speak different languages from each other and the teacher, but learning English gets everyone on the same page.

“The only common misconception is the sense that we have to be able to speak all of their languages in order to teach them,” Catlin said.

In the County, newcomer students may have spent part of this summer in programs designed to help them acclimate to life in the Charlottesville area.

“We have a pretty good program that gets them out in the community,” Carlock said. “They’re not only learning English, but also learning about Albemarle County and Charlottesville and the history of the community.”

The IRC’s Kuhr also said that despite a high value placed on education, expectations of parental involvement may be higher in the American school system as compared to other countries.

“We orient the parents so that they have a continuing role and know what’s going on in the schools,” Kuhr said.

In Albemarle, Carlock has seen refugees overcome many obstacles to achieve fluency and acclimation.

“I was really struck with the stories of resiliency and determination of my students, who were often teenagers but who had experienced more of life than I had as a student fresh out of graduate school,” said Carlock, remembering his first years teaching English language learners a decade ago.

“Their stories have been extremely powerful and oftentimes heartbreaking,” Carlock added.

Despite the challenges refugee students face, Carlock characterizes them as highly motivated to learn, with families who place a high value on educational opportunities available in the United States.

“Some of our greatest success stories are in the ESOL programs,” Carlock said. “We have refugee students who have come from very difficult backgrounds and circumstances, sometimes with interrupted schooling, and have learned English extremely quickly and graduated and gone on to PVCC and then gone on to [the University of Virginia].”

On the whole, Kuhr praises both school systems’ efforts.

“The best part is when we see children who first came to this country as refugees graduate from high school, prepared to start their own lives as Americans,” Kuhr said.