Regional planners search for solutions to reduce I-64 crashes 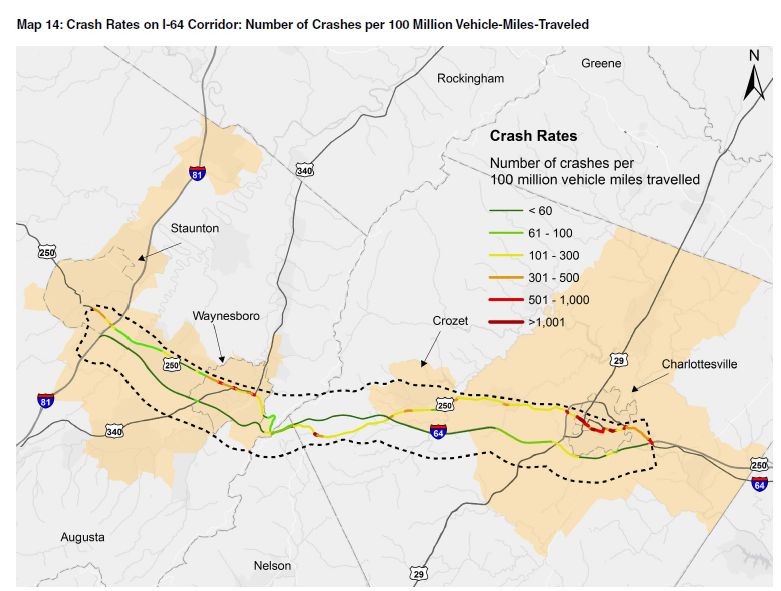 Regional transportation planners are close to completing a yearlong study of Interstate 64 and U.S. 250 that will be used to identify ways to ease congestion and improve safety along a corridor that can become paralyzed with a single crash.

“For western Albemarle residents, it is a daily nightmare of whether traffic is going to be moving or if it’s not,” said Supervisor Ann Mallek. “People never quite know if they should stay on U.S. 250 or to get on I-64 to get to work.”

In an era where funding for transportation projects is scarce, the Thomas Jefferson Planning District Commission and the Staunton-Augusta-Waynesboro Metropolitan Planning Organization have used a federal grant to make recommendations that could lead to ways to alleviate the problem.

“Looking at projects in this study is the first hurdle,” said Wood Hudson, a planner with TJPDC. “From here, an individual project like a park and ride lot or a truck climbing lane would need a further study or report where we would start to build cost estimates and find out if there is right of way acquisition that is needed.”

The study covered a 40 mile stretch of I-64 between Interstate 81 and Exit 124 and also looked at U.S. 250 and the CSX railroad line operated by Buckingham Branch Railroad within the same limits.

More than 50,000 vehicles a day travel between Exit 107 and Exit 121, according to counts taken in 2015. As much as 11 percent of that figure consists of trucks and other heavy vehicles.

Mallek said traffic volumes on U.S. 250 have gone up since she first became involved in transportation issues in the early 2000s. In 2001, the Virginia Department of Transportation estimated the average daily traffic at the intersection of U.S. 250 and Miller School Road at 4,800 vehicles. In 2016, that estimate had climbed to 12,000 a day.

A major component of the study looked at crashes on the two highways.

“With limited alternative routes, crashes that block travel lanes can cause significant backups,” reads the report.

Using data from VDOT, the study mapped hotspots where crashes are more likely to occur. The most severe crashes are clustered around exits 99, 107 and 118 as well as near I-64’s intersection with I-81.

The study lists several recommendations that could address congestion. These include additional climbing lanes on westbound I-64 between mile markers 99 and 105 either on a temporary or permanent basis. The existing shoulders could be used on a temporary basis.

“The potential permanent solution is to add a lane into the median with the addition of a barrier wall,” reads the report.

A working group has recommended studying additional climbing lanes in both directions between mile markers 113 and 119.

There are also opportunities for solutions with lower costs.

The Virginia Transportation Research Council has found that one in six vehicular collisions is with an animal. Just over 50 percent of those involve deer according to a study of carcasses.

“Virginia is consistently among the top 10 states with the highest number of deer collisions, with more than 56,000 recorded per year since 2007,” said Stacy Londrey, spokeswoman for VDOT’s Culpeper District. “The section of I-64 on and near Afton Mountain was targeted for safety and mobility improvements because of an especially high rate of crashes and resulting traffic stops.”

The study recommended more fences like the two installed earlier this year next mile marker 110 and mile marker 114 to keep deer from crossing the road. The purpose of these fences are to guide animals to two tunnels that allow them to cross I-64 without coming into conflict with vehicles.

“The fence is made of galvanized steel in a woven-wire style and is 8 feet high and about 1 mile in length in each location,” Londrey said.

The draft study reports that there have been no vehicle-wildlife collisions in fenced areas since they were installed.

The study also looked at how previous road designs may contribute to congestion and safety problems.

The junction of I-64 and U.S. 250 at Afton Mountain is known as a “trumpet interchange” which the study suggests could lead to traffic backups.

“The complex geometric design of the interchanges, presence of several different roadways and the topography of the area consisting of steep grades might be among the main reasons behind congestion in this location,” reads the study.

The study notes that Exit 118 is a “tight interchange” with a short weave area that “slows down optimal traffic operations.”

“We do have some issues at the intersection of U.S. 29 and I-64,” said Albemarle Supervisor Liz Palmer. “The problem I hear from my constituents is trucks and trucks getting on I-64 from U.S. 29 heading north and west towards Staunton.”

Improvements to Exit 118 will occur in phases. A $146 million plan to rebuild the intersection ranked near the bottom of projects in the first year of Virginia’s Smart Scale prioritization process. A scaled-down version to address Palmer’s concern was approved by the Commonwealth Transportation Board this year at a cost of $2.9 million.

The study documents other forthcoming transportation projects. The CTB has funded a $5.8 million roundabout at the intersection of U.S. 250 and state Route 151 west of Crozet. A temporary traffic light was installed in April 2017.

Another low-cost remedy could be an expansion of the electronic signs that guide people over Afton Mountain.

“The Afton area is challenged with steep terrain, weather conditions and limited access,” reads Page 36 of the study. “Keeping drivers informed and providing appropriate directions is very important to ensure roadway safety in the corridor.”

The study recommends that this “active traffic safety management system” be extended further east to warn drivers of “sun blindness and traffic congestion around the Charlottesville exits.”

“We’ve all heard about the sun problem in the morning and the sun blindness,” Palmer said.

Mallek said part of the solution will be getting people out of single-occupancy vehicles.

“There are a lot of people working on bike and pedestrian infrastructure and other people are working on buses,” Mallek said. “Any and all solutions are going to be important.”