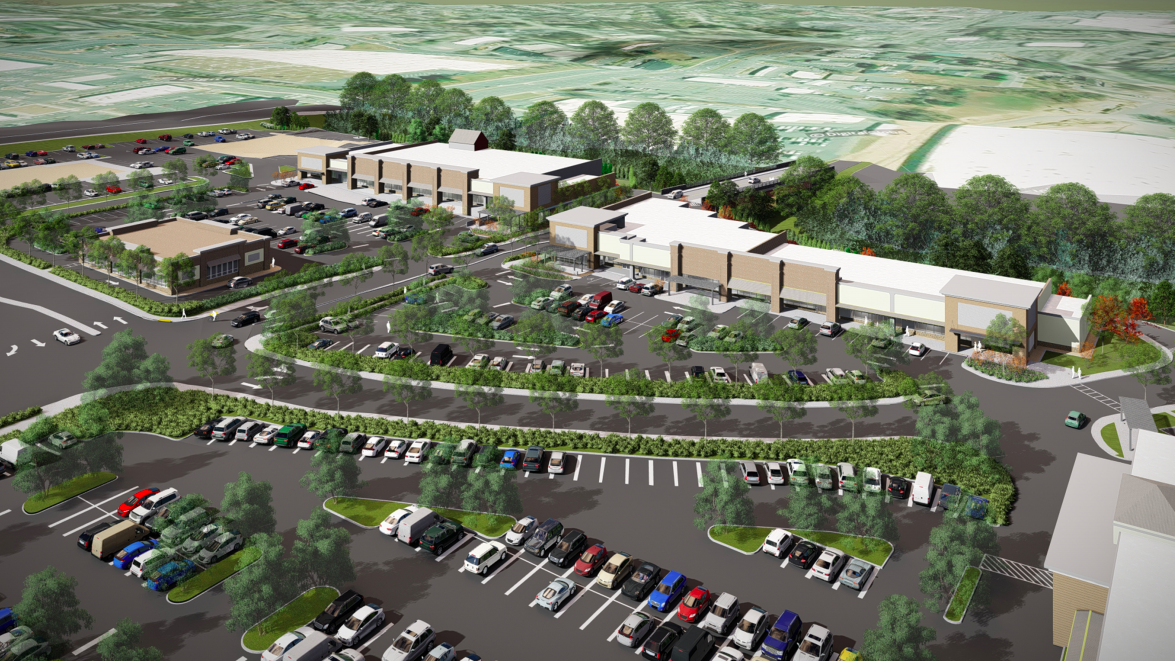 The plan to redevelop the Seminole Square Shopping Center removes 92 parking spaces and breaks up the remaining spaces with landscaping.

Seminole Square’s aging shopping center is getting a facelift.

The Charlottesville Planning Commission unanimously approved a redevelopment of Seminole Square that could allow the 32-year-old center to provide a more pedestrian-focused experience.

As Charlottesville’s Entrance Corridor Review Board, the planning commission has the power to approve or deny designs in entrance corridors like the city’s portions of U.S. 29.

“The first time I ever went there, I thought, ‘We’re doomed. This is so Northern Virginia, I don’t even know how to drive through this space,’” said Commissioner Genevieve Keller. “This is a step forward.”

The January completion of Hillsdale Drive, a connection between Hydraulic Road and Rio Road that goes through Seminole Square, shaped the redesign.

“We really needed to see the road operate before we understood exactly what we were dealing with,” said David Mitchell, a principal at Great Eastern Management Company, which manages Seminole Square. “We have to reorient the structures and the whole layout to accommodate that.”

The construction of Hillsdale Drive cut Seminole Square’s North Wing, which was located north of Seminole Court, into two buildings. The Ebony Images hair salon relocated from the part of the building that was demolished to another shop in the North Wing.

“The redevelopment has hurt our business rather than help our business,” said Michele Rush-Bulls, co-owner of Ebony Images. “People didn’t want to drive over [during construction]. They would come over with a clean car. When they’d leave, the car was full of dust.”

The plan breaks up the flat façades of Seminole Square’s North and East wings with canopies, trellises and new storefronts made from brick, stone and other materials. The design also removes 92 parking spaces and breaks up the remaining spaces with landscaping.

“We’re reaching out with our trellises, sort of as open arms [that say]: ‘Walk over here. This is a safe area,’” said Mark Kestner, of Henningsen Kestner Architects.

A second impetus for development is the center’s lack of an anchor store. Since Giant Food left Seminole Square in 2012, fewer shoppers have made weekly trips.

“When Giant was here, we had no problems,” Rush-Bulls said. “There’s only so much advertising we can do if there isn’t a bigger reason for people to come here.”

In 2016, Kroger announced it would demolish the former Giant building and build its “largest Virginia store west of Richmond” at the site.

Rush-Bulls said that Ebony Images could have relocated to another shopping center during the construction of Hillsdale Drive, but the promise of a Kroger nearby prompted the salon to stay.

Kroger has since canceled its move to Seminole Square, but the grocery chain still holds the long-term lease on the property.

“Right now, there are no plans to do anything with that property, and we can’t do anything with it,” Mitchell said. “We’re hoping if we can fix and upgrade the rest of the center, it will possibly spark something to happen on the other end.”

Keller said she was disappointed that the design did not incorporate more elements from Albemarle and Charlottesville’s joint Hydraulic small-area plan.

“I hope that this kind of major reinvestment in this shopping center is not going to delay and preclude the kind of redevelopment that’s shown in the Hydraulic small-area plan. But I don’t see any way that we could not approve this,” Keller said.

Jeff Werner, the city planner who reviewed the Seminole Square application, said staff members had reservations about what walkers and bikers would see from the proposed trail.

“The aesthetic improvements to the rear façades of the North Wing are minimal and, we believe, insufficient,” Werner said. “While these elevations are not the primary façades and are not intended to serve as entries into the commercial spaces, they will be visible.”

Commissioner Hosea Mitchell suggested that the developers add metal frames for vegetation behind the buildings.

Any changes to the new buildings that deviate from the site plan will have to come back to the planning commission in its role as the Entrance Review Board. The expansion behind the North Wing will be reviewed at a later date.