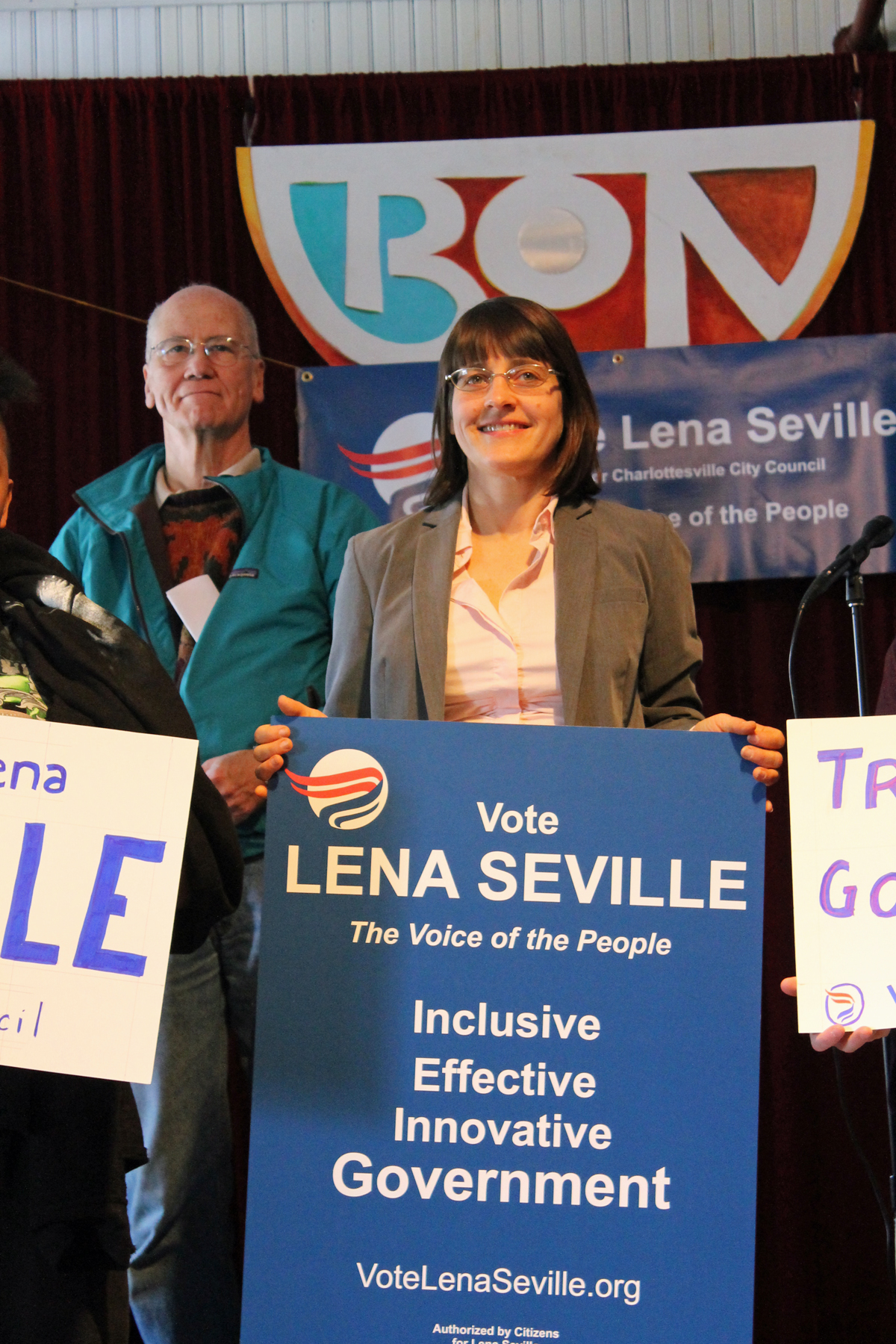 Seville, 46, said many people care about the Charlottesville community and want to make sure it lives up to its potential — and that she is one of those people.

“I’ve done my homework and I am prepared to step up and serve this community,” Seville said at her announcement Saturday at BON Cafe. “I have the time and commitment to treat this responsibility with the respect it deserves.”

Seville said her priorities include citizen participation and open government, development, the environment and social justice.

Seville said she worked in retail, restaurants and as a secretary before moving to Charlottesville to go back to school more than 10 years ago.

Seville said she studied environmental thought and practice at the University of Virginia. She said her full-time occupation now is advocating for what she’s passionate about and running for the council.

Seville sits on several local boards and committees, including the Belmont-Carlton Neighborhood Association, Transit Riders of Charlottesville and the Belmont Bridge Steering Committee.

“I will be inclusive, effective and innovative in my approach,” she said. “As an activist I work with a large and diverse group of people that care deeply but don’t always have the time, background or ability to get further involved.”

Seville said she would increase avenues for public participation.

“City government needs to be more responsive to citizens,” she said. “I am volunteering for the city on different boards and commissions. Sometimes I’m appointed to a steering committee and I can’t get responses to questions.”

“We shouldn’t be kept out of the process of creating our own community,” she said.

Seville said that if elected she also would ask more questions about the staff recommendations received by the council.

“Sometimes it’s expert opinion but it is subjective,” said Seville. “Understanding the recommendation is important, but City Council is elected to make decisions, not just accept recommendations.”

The City Council plans to use a meals tax increase to balance the upcoming budget. Seville said she is against the increase and said the city doesn’t need to raise taxes.

“I think we need to take a closer look at our budget,” she said. “We’ve got a lot of projects that are very expensive. We have spent a lot of money on consultants when we don’t have the funds to implement those projects.”

Sherry Kraft, a board member of the Democratic Road Forward Pack, also was in attendance. She said Seville completed the group’s candidate-training program and is the first person from the class to declare as a candidate.

“I wanted to come support Lena for putting herself out there as a candidate,” Kraft said. “Our class helps people learn what it means to become a candidate, how to run a campaign and what you need to know about local government.”

Kraft said she is excited about Seville’s campaign.

“She’s doing a lot of this on her own and her campaign is very grassroots, which really reflects who she is,” she said.

Three of five council seats will be on the Nov. 3 general election ballot. Huja, Kathy Galvin and Dede Smith, all Democrats, currently hold those seats.

Huja has announced he will not seek another term. Galvin has filed paperwork with the election office but has yet to formally announce her candidacy. Smith is expected to make her re-election announcement Wednesday.

Democrats Michael Signer and Wes Bellamy have both announced their campaigns, and computer programmer Anson Parker has said he is preparing to run as an independent.

Democrats will go to the polls in a June 9 primary to select three nominees.