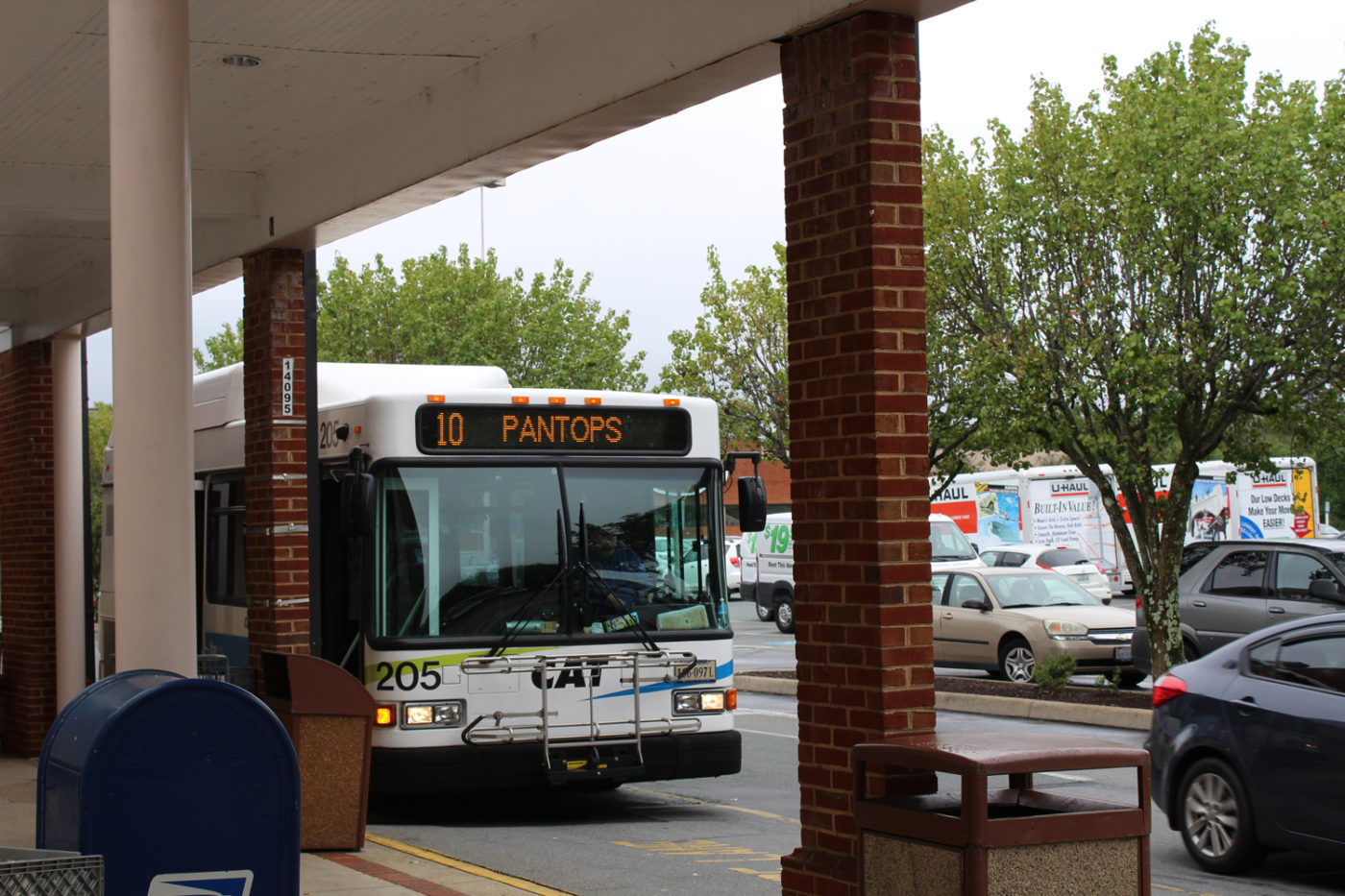 A bus stops at the Pantops Shopping Center

As stores begin to open at the new 5th Street Station, people will be able to get there to shop or work via a new Charlottesville Area Transit bus route.

But some are wondering if older shopping centers along CAT’s other routes can be redeveloped to give more people the option of living in a place where they have another transportation choice.

“Many women with children who are required to work and want to work can’t work because they can’t get to a job in the prescribed period of time to get there,” said Anne Linden, an Albemarle County resident who faced that issue as a single mother of four children.

Linden said the opening of shopping centers such as Stonefield and 5th Street Station has caused others to decline.

“I know that there are big empty spaces in some of the malls,” Linden said. “Some of the space could be used for affordable housing and even some child care.”

CAT, which is run by the city of Charlottesville, operates fixed-route services throughout the city and Albemarle County. The county pays the agency for routes that travel along the U.S. 29, Pantops and Fifth Street Extended corridors.

Most if not all of the shopping centers along those routes do not have housing options on site and there are no plans to build any. No residences will be built as part of 5th Street Station.

“The Board of Supervisors has set a priority on redevelopment and revitalization of these urban areas that are on transit routes.”

There are apartment complexes within walking distance of Fashion Square Mall but rents are out of the range that would be considered affordable. For instance, rent for one two-bedroom unit at nearby Glenwood Station is $1,495 a month.

“Housing is considered affordable if it costs no more than 30% of gross household income,” said Stacy Pethia, the housing coordinator for the City of Charlottesville.

For Glenwood Station to be considered affordable, a household would have to have a gross monthly income of $5,000 a month.

Rents at nearby Abbington Crossing are lower at up to $1,300 a month for a three bedroom unit but a household would have to have a gross monthly income of $4,333 for that to be considered affordable.

There are options nearby for families who earn less than 60 percent of the area’s annual median income according to Albemarle’s chief of housing. Developers can get tax credits for providing housing to people who qualify for assistance.

Yet, officials in Albemarle would like private landowners to at least consider the possibility of making housing more affordable as they plan for the future of their investments.

“The Board of Supervisors has set a priority on redevelopment and revitalization of these urban areas that are on transit routes, and there’s certainly a priority that’s emerging about affordable housing,” said County Executive Tom Foley. “How those two merge and come together is the question and it’s the challenge we’re trying to figure out.”

Federal Realty also purchased the Shoppers World Plaza in 2007 and renovated the center and rebranded it as Twentyninth Place. No residential units were built as part of either project.

The firm EDENS built some homes as part of the Shops at Stonefield, which is served by CAT Route 8. Townhouses sell from $345,000 to $380,000, out of the reach of people who qualify for rental assistance.

Great Eastern Management Co. plans to renovate Seminole Square shopping center to take advantage of the coming extension of Hillsdale Road. However, there are no plans to build housing there.

“Just from a simple economic standpoint, it is really, really tough to put residential on a piece of property that fronts a major traffic corridor,” Mitchell said.

“The only time residential can compete with being able to pay for the value of a piece of land on a transit or traffic corridor is with density, and I’m talking lots of density,” he said.

Another obstacle places limits on building residential directly on U.S. 29. Landowners in the city need a special-use permit to build housing. That includes the Kmart shopping center, which was built in 1964.

Other older properties in the community include Albemarle Square, which was built in 1976.

“The current zoning is for a shopping center and most retailers prefer to be located next to other retailers,” said Jim Plotkin of Dumbarton Properties. “But if market conditions were to change we would certainly consider the best uses of  our property including mixed-uses if permitted by the county and if its determined to be feasible through a due diligence process.”

Dumbarton Properties of Richmond stopped Charlottesville Area Transit from using its property soon after the Northside Library moved to a new location on Rio Road.

“They cited parking lot damage as their reason for requesting we stop service to the shopping center,” said John Jones, manager of CAT. “We complied.”

However, Plotkin said Dumbarton asked CAT to slow down their vehicles and service was stopped when CAT did not respond.

Coleway Development built the Arden Place luxury apartment complex to the east of Albemarle Square a few years ago. Rents for a three bedroom unit start at $1,689 a month according to the complex’s website. The nearby Rio Hill Apartments complex is more affordable with three bedroom units ranging up to $1,030 a month.

But could shopping centers themselves be repurposed with some residential units?

Fashion Square mall was built in 1980 and had an occupancy rate of 87.1 percent in 2015, according to a report filed by its owner, WP Glimcher. Officials there declined to comment for this story.

Both Albemarle Square and Fashion Square are in the scope of a small area plan the county is conducting for the intersection of Rio Road and U.S. 29.

Plotkin said Dumbarton is participating in the process, which is being coordinated by the Renaissance Planning Group thanks to a grant from the state of Virginia.

“We will respectfully keep an eye out for any tangible county housing incentives and initiatives that may result from the small area process,” Plotkin said.

One elected officials who also works in the transit sector said this is a common question across the county.

“The dilemma across the nation is those suburban areas that have become now urban areas were shaped as auto-oriented developments that now have to figure out how to retrofit themselves to support transit and other modes,” said county Supervisor Brad Sheffield, who is the executive director of the JAUNT paratransit service.

Could Pantops break the mold?

“It could possibly work if you incentivize the landowners with two things — additional density and tax credits.”

The Pantops Shopping Center is owned and operated by Great Eastern Management. Built in 1984, the strip mall juts out on a peninsula of land formed by the Rivanna River.

The center is about a mile from downtown Charlottesville and is served by CAT Route 10.

“There are a lot of people who live in the city who are going out to the county to places at Peter Jefferson Place, State Farm and [Sentara] Martha Jefferson Hospital,” said Supervisor Norman Dill. “There are so many cars going across there and there’s so much opportunity for mass transit.”

Dill said he believes the center is underutilized, pointing to the large amount of asphalt that takes up the land.

“There’s possibly a way to upgrade that, expand it or redevelop it. It also has the advantage of being right along the Rivanna River and so it could be low-income housing,” Dill said. “What the government needs to do is make it so that can be built.”

Mitchell said his company is theoretically open to the idea.

“It could possibly work if you incentivize the landowners with two things — additional density and tax credits,” Mitchell said.

Under the latter, properties that the government considers underutilized could be taxed at a lower rate in exchange for community benefits.

“If you provide the housing and you provide affordable housing within it, the government could for some period of time levy taxes at the original value before development,” Mitchell said.

Even then, Mitchell said it would be a risk for the developer because the return on investment might still not be enough.

“The community and the City Council and the Board of Supervisors need to understand and accept the realities of economics,” Mitchell said. “You can make all the great plans you want but the government doesn’t own the land and they can’t make landowners do what they want them to do.”

Jarrett Walker, a nationally known public-transit consultant, said communities should consider how to create places where people can live affordably. That’s more than just about housing.

“If housing is cheap because other needs are more expensive, you haven’t really helped anyone,” Walker said, adding that the cost of keeping a car is the second-biggest expense in American households.

“A site where someone can get by without a car, or share just one car within a family, is a site where people will have a better shot at prosperity,” he said.