Sidewalk to be closed on deteriorating Belmont Bridge 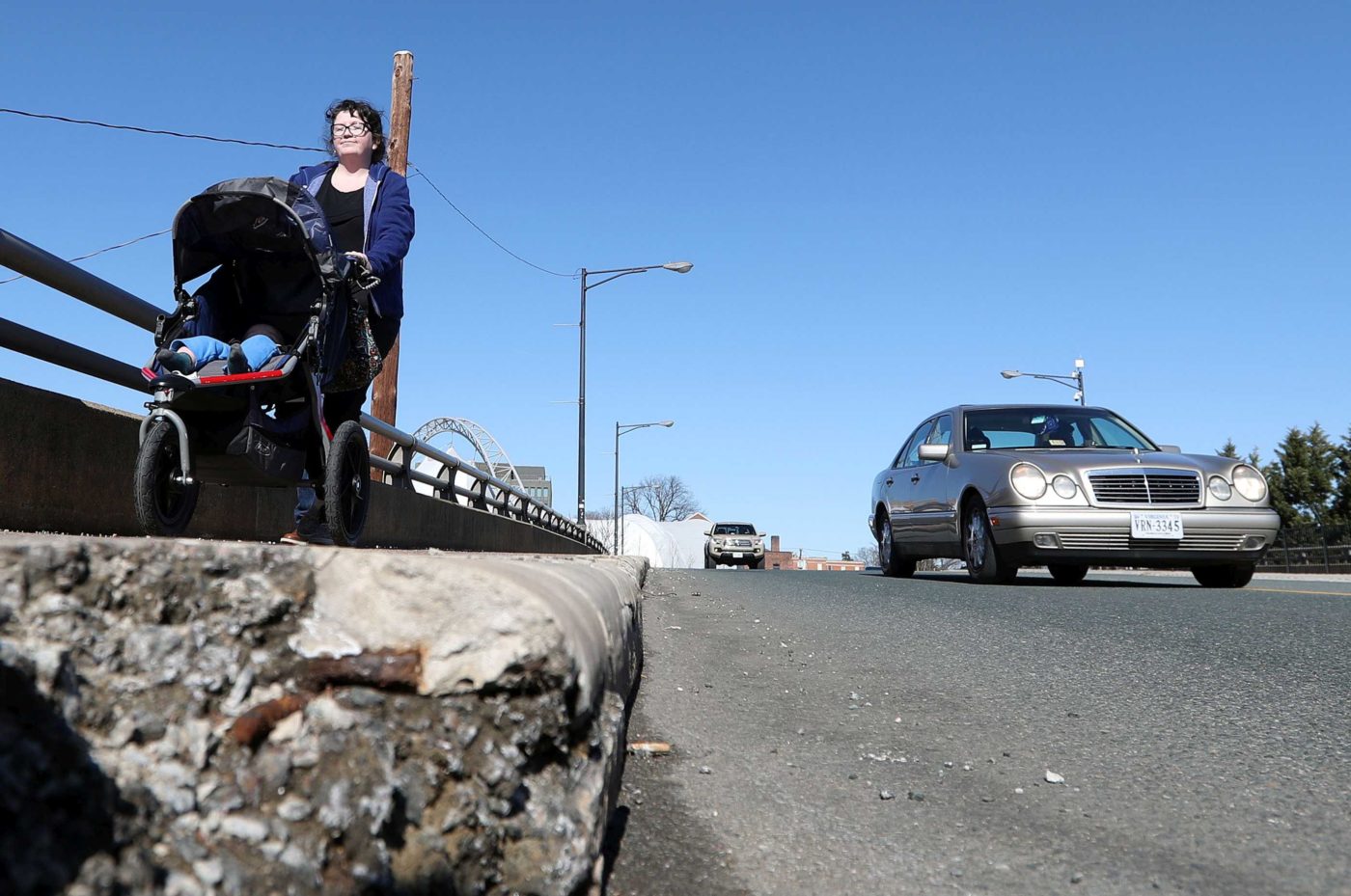 The western sidewalk will be closed by the end of the month,

As a second process begins to design a new Belmont Bridge, the western sidewalk on the structure soon will be closed while construction documents are drawn up for the bridge’s re-placement.

“The sidewalk has degraded to a point that it has become a safety concern,” said Alexander Ikefuna, the city’s director of neighborhood development services. “The sidewalk has been patched numerous times over the years, and these areas that need patching are becoming more frequent.”

The eastern sidewalk has been closed since 2011.

However, people will still be able to walk or ride bicycles over the bridge because one of the two southbound lanes will be converted to a multi-use path.

“Pedestrians will be protected from vehicular traffic by a continuous concrete barrier,” Silman added.

The existing bridge was built in 1961 and city engineers recommended in 2003 that it be re-placed rather than repaired.

“That report [found] that it would be more cost effective to replace the bridge rather than re-construct the deck on aging piers,” Ikefuna said.

The City Council ratified that decision in 2009 and the firm MMM Design was hired soon after to develop plans.

But some in the community thought MMM’s preliminary concepts were not up to the city’s standards. Filmmaker Brian Wimer held a design competition that also involved students and faculty from the University of Virginia’s School of Architecture. The winning entry envisioned no bridge at all and an at-grade crossing of the railroad tracks.

The council directed MMM to design an enhanced bridge and to work with a local architect to review the competition’s entries to develop an alternative.

The PLACE design task force recommended in 2013 that the city pursue an underpass concept developed by local architect Jim Rounsevell. The city spent the next 18 months evaluating that alternative alongside MMM Design’s concepts before deciding unanimously in 2014 to proceed with a new bridge.

In December, the city entered into a $1.98 million contract with Kimley-Horn to resume the design process after MMM Design went out of business. The contract was awarded 13 months after the project was advertised for proposals.

“In the coming weeks, the concrete barricades will be installed to separate pedestrian from vehicular traffic, followed by a fence to restrict use of the sidewalk,” Ikefuna said.

Silman said this lane will be 10 feet wide and will have “minimal impact to vehicular traffic” because the southbound bridge is already mostly configured with one lane for cars, trucks and buses.

Ikefuna said inspections by Mid-Atlantic Engineering have determined the roadway is safe, but the sidewalk has “different loading parameters and is of different construction.”

“As a result, the sidewalk will show signs of aging differently and more rapidly since it is not as robust as the vehicular component of the main bridge deck,” Ikefuna said, adding that the bridge is regularly inspected.

On Monday, a bridge passerby, who did not want to be identified, said he thinks the bridge should be replaced as soon as possible.

“It’s crumbling on one side and the bottom is just not looking too good,” he said, referring to the plywood installed underneath the bridge deck to catch concrete from falling onto a city parking lot.

The closure will happen at the same time the public engagement portion of the design process gets underway.

The steering committee will be briefed on the work to date at a meeting Feb. 21 at CitySpace. Several city advisory committees will get their chance to weigh in on the design at meetings that will take place the following two days.

At those meetings, attendees will participate in facilitated activities regarding the previous design process and “factors” for success for the current one.

The contract gives Kimley-Horn until the end of March 2018 to complete construction docu-ments that will allow the project to go to bid.

The Commonwealth Transportation Board previously has allocated $14.5 million to the re-placement project but the most recent cost estimate is $17.2 million. A new cost estimate will not be available until sometime during the design process.

To ensure the city can afford the project, the council has agreed to spend $4.5 million to re-ceive an equal match through the Virginia Department of Transportation’s revenue-sharing program.

The CTB will not formally vote on that additional funding until June, but VDOT has identified the Belmont Bridge as a top priority.

“Belmont and the other [priority] projects have been recommended for funding,” said Stacy Londrey, a VDOT spokeswoman.