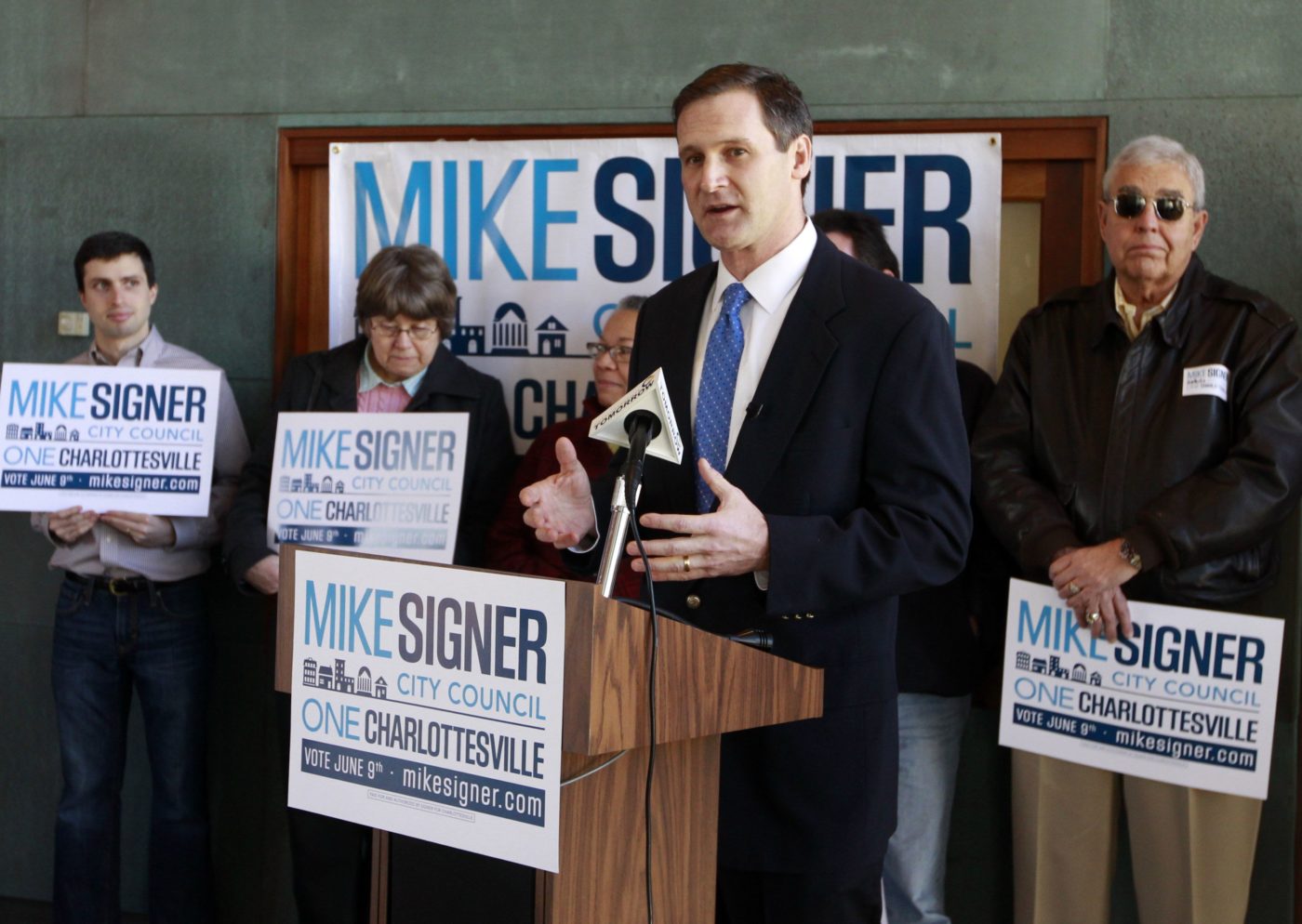 http://s3.amazonaws.com/cville/cm/mutlimedia/20150211-signer-announcement.MP3 Huja not seeking third term; Signer enters council raceTwo Democrats exploring runs for Charlottesville City CouncilDemocrats gain advantage in Albemarle and retain seats in Charlottesville
Flanked by several former Charlottesville mayors and other elected officials, attorney Michael Signer formally announced his campaign Wednesday for the Democratic nomination for the City Council.
“We have this incredible tradition of citizen leadership in Charlottesville, and we all stand on the shoulders of giants in this city when you look at what has been built in the past,” Signer said at a campaign event at the city’s transit center.
Signer, 42, is the first candidate to launch an official campaign for the council this election season.
The council seats currently held by Kathy Galvin, Dede Smith and Satyendra Huja are up for election Nov. 3. Huja has announced he will not seek a third term. Smith has not yet indicated whether she will run for a second term, but Galvin submitted a statement of qualification with the Virginia State Board of Elections earlier this month.
Two other Democrats — Wes Bellamy and Lena Seville — have filed paperwork with the city’s registrar office. Bellamy, an Albemarle High School teacher, is expected to announce his candidacy at an event Sunday. Seville, a Belmont resident, has said she is exploring a potential Democratic bid.
Democrats will go to the polls in a June 9 primary to select three candidates.
One independent candidate also has stepped forward. Programmer Anson Parker is campaigning on a platform of making the working of city government more transparent through technology. However, he has not yet filed any paperwork.
One former mayor said Signer’s experience as president of the Fifeville Neighborhood Association qualifies him to serve.
“The city needs a council member who will serve all of the citizens of Charlottesville by focusing on the everyday quality of life in our diverse neighborhoods,” said Kay Slaughter, who served on the council between 1991 and 1998.
Other former elected officials supporting Signer at his kickoff event included former councilors Blake Caravati, John Conover, Meredith Richards and Julian Taliaferro. His campaign is being chaired by Tom Vandever, who served on the council from 1988 to 1996.
Signer also was endorsed by a member of the city School Board.
“Mike understands that the very vitality of the city – its growth and its economic development – is tied to the strength of its public schools,” Juandiego Wade said.
Signer placed second in the 2009 Democratic primary race for lieutenant governor. He is the founder of the Madison Law & Strategy Group and a graduate of the University of Virginia School of Law.
The candidate also was joined by his wife, Emily Blout, and their two 4 ½-month-old twins.
“This is truly a family affair,” Blout said. “It’s something that’s near and dear to our hearts and we’re really excited to see Mike here.”
Signer said his priorities will include economic development, public safety and improving the quality of life. He said he is ready to dedicate himself to civic affairs.
When Signer grew concerned with the amount of litter in the city, he and Blout helped form a group called Charlottesville Sparkles to begin a clean-up effort.
“The quality of our public spaces reflects on all of us,” Signer said. “Our shared public spaces should be as beautiful and as clean and as wonderful as the people of Charlottesville.”
Signer is also a graduate of the Charlottesville Citizens Police Academy and supports community policing to establish trust and reduce crime. He added that he and Blout have recently been the victims of property crime.
While new councilors will not take their seats until January, Signer said he already is actively engaged in the issues. For instance, he also is a member of the steering committee for the $340,000 study for a West Main streetscape.
“I’ve been a very vocal proponent in a lot of the meetings for doing whatever we can to make sure the design is as inclusive to the surrounding neighborhoods as possible,” Signer said. “It should not just be this boutique alley which ignores the fact that you have historic middle income neighborhood rights around it.”
Signer also said he is wary of a recent decision by the City Council to build the draft budget for fiscal year 2016 on a 1 percent increase in the meals tax. Doing so would help close a projected budget deficit, but Signer would have asked to cut spending first.
“Increasing tax revenue should not always be the default first option,” Signer said.