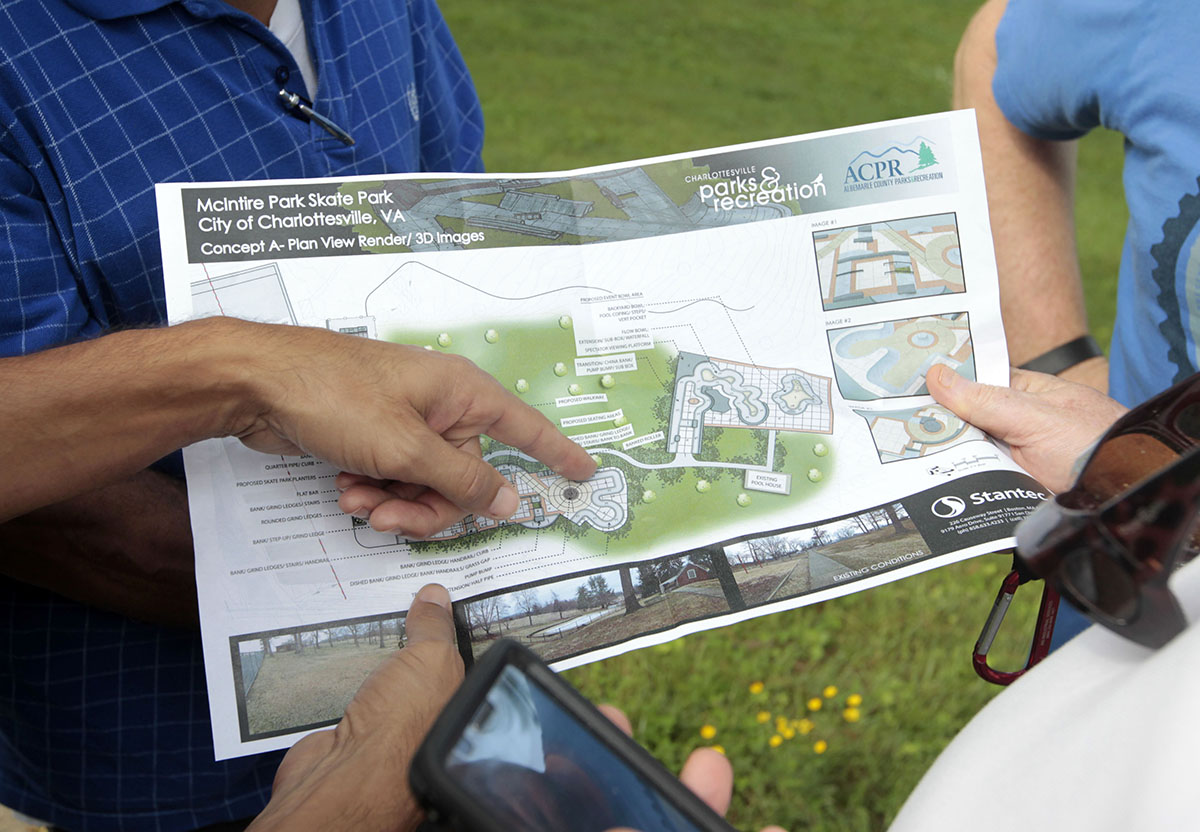 Reviewing the site and plans for skate park

A group of 45 local skaters and community members met recently to develop designs for a 30,000-square-foot regional skate park in Charlottesville.

The skate park is planned for a space in McIntire Park at the site of a wading pool. Design consultant Stantec, in response to previous community feedback, revealed two new alternatives during a workshop and presentation Tuesday at the Carver Recreational Center.

“The goal is to have something tangible to create awareness and get fundraising,” said Kanten Russell, a designer with Stantec. “The faster we get designs, the more we can get people on board with this project.”

The meeting was the second of three community workshops scheduled before final plans are presented to city officials.

Garber said the city will have to make a decision on the level of funding it provides. Phasing the project would allow sections of the park to be up and running while funds are still being raised for additional features.

Both designs include an open space for activities like roller derby, a plaza-like skate space, a beginner skate area and a bowl area.

Concept A is known as a “snake run” because it looks similar to a hollowed out snake belly, curving up on both sides of the path.

“Concept B is the more linear concept,” said Russell. “It has more of a skate path with curved banks leading into the [bowl] area.”

Among the participants in the meeting were young and seasoned skaters, members of Derby Dames and the Charlottesville Skate Park Advisory Committee.

While most preferences varied from person to person, there was a generational divide between the designs of one section in the two proposals. The younger boarders favored concept B’s path connecting the bowl area to the plaza area, while older riders supported concept A.

“Let’s take the skate-able path and have it ‘waterfall’ down into the ravine … making it a hybrid between the two [concepts],” Russell suggested.

Regardless of what is chosen, no design will be without a diversity of features.

The park may even be accessible for all types of users and incorporate alternative materials.

“Skate and bike parks have come a long way in integrating recycled materials and even being ADA-accessible, so they’re a barrier-free environment,” said Mike McIntyre, another Stantec designer.

Although previously used as a pool, the space will provide some helpful features for the new skate park.

“The infrastructure for drainage in the bowls is already there because it was a pool,” Russell said. “We’re talking about repurposing the pool house for our restrooms. There are already restrooms in it [that can be] cleaned up.”

The consultants’ personal passion for skating was also on display. The start of the meeting was delayed as the consultants and some of the workshop participants took to their boards at the temporary skate park.

“I’ve been designing skate parks full time for almost 17 years now,” McIntyre said. “I have a background in skateboarding.”

Russell was previously a professional skater before he began designing parks.

The consultants will return with final design plans to present to the public and city by the end of June.

“I would encourage even people who don’t skate to come, because the [skate park] will fit into the East McIntire Park master plan,” Garber said.

Visit http://www.charlottesville.org/parksandrec to view the updated design proposals and send comments to the consultants.