The City of Charlottesville has new design guidelines in place for seasonal restaurant tents. However, the first applicant to come before the Board of Architectural Review on Tuesday left empty-handed after learning that no ordinary tent is going to get approved.

In addition, city staff said three other city restaurants will be told soon that their existing tents, which have been up for more than five days, are illegal.

The Commonwealth Restaurant & Skybar on the Downtown Mall opened in September 2011 in the renovated A&N department store building. The design team from Alloy Workshops was recognized last month by the local chapter of the American Institute of Architects for its renovation of the building owned by Gabe Silverman.

“Since it has opened, it has been very successful and very popular,” said Mary Joy Scala, the city’s preservation and design planner. “Last year, [the applicant] put up a tent very similar to the one that he is asking for approval of tonight. At that time we didn’t have guidelines in place so we allowed that and several other tents to be left up for last year’s season.”

However, not all of the restaurant’s neighbors were happy and the city decided it needed to establish consistent guidelines. For this winter, the restaurant’s owner, Alex George, will need to have the Skybar tent approved if he intends to use it for more than five days at a time.

“What Alex is trying to do is bring life to this town,” said Silverman in a self-described rare appearance before local officials. “Most of the people in this town despise you, and you should really consider why. They aren’t against controls, they are against the way it’s done.” 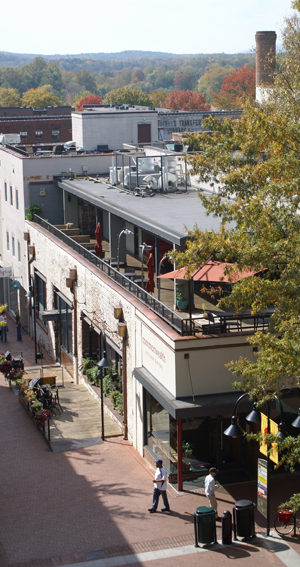 The design guidelines are intended to protect the historic character of the Downtown Mall and West Main Street as well as ensure quality development in the city’s entrance corridors, such as Preston Avenue.

“A temporary structure is permitted in this location,” Scala told the BAR. “The question is only whether the tent design meets the guidelines and whether it is compatible with this building and other properties in the downtown district.”

Consistent application of design rules was a point driven home by a neighbor who lives on the other side of the mall from the Commonwealth Restaurant.

“Twenty-five years ago when I moved to the mall, I was one of pioneers that purchased a condo,” said Terry Shotwell, the former owner of The Nook restaurant. “I had put an awning up over my patio, unknowing [about the BAR], and of course I found out quickly it was wrong.”

Shotwell said she had to enclose her entire patio in glass to get the city’s approval and that her restaurant had other BAR requests it had to comply with over the years.

“So you can imagine how amazed I was when I looked out my front window one morning and saw this huge tent across the street,” Shotwell said. “To me it is not a welcoming feature on the historic Downtown Mall.”

BAR member Melanie Miller said she was concerned about the tent’s proportions, which place it all the way at the building’s mall façade.

“The proposal is incompatible with the historic, cultural and architectural character in the district,” Miller said. “It is the first thing you see from the [Market Street Parking Garage] elevator and we have a neighbor who has expressed concern.”

Michael Osteen is the BAR’s liaison from the Planning Commission.

“I think that there is an appropriate tent for that roof, but I think it needs to be designed for this specific site and circumstance,” Osteen said. “The tent as proposed is not appropriate.”

Other BAR members commented that the tent was a “fun thing” and “cool” and they hoped George would be able to return with another design.

“The question is how the board can help Alex come to a solution?” Silverman asked. “If two of you can be empowered to make a decision, that would be helpful. To ask Alex to just defer, come back without any real direction, makes it very difficult for him as a business person.”

The BAR members said they made themselves available for meetings but that open government regulations only allowed them to make decisions publicly and as a collective body.

George agreed to defer his application.

“I understand what they are saying and trying to accomplish,” George said after the vote. “I just don’t think they understand the cost that is incurred to a small business. What they are proposing is extremely expensive.”

“As we try to work through the details, I hope they don’t lose sight of the fact that we have 55 employees,” George said. “Without the tent, I may be forced to lay off 15 of them.”

Scala said that tents at the Horse & Hound, Maya and McGrady’s are currently in violation of city regulations. Mono Loco’s tent on Water Street is grandfathered and can remain in place.