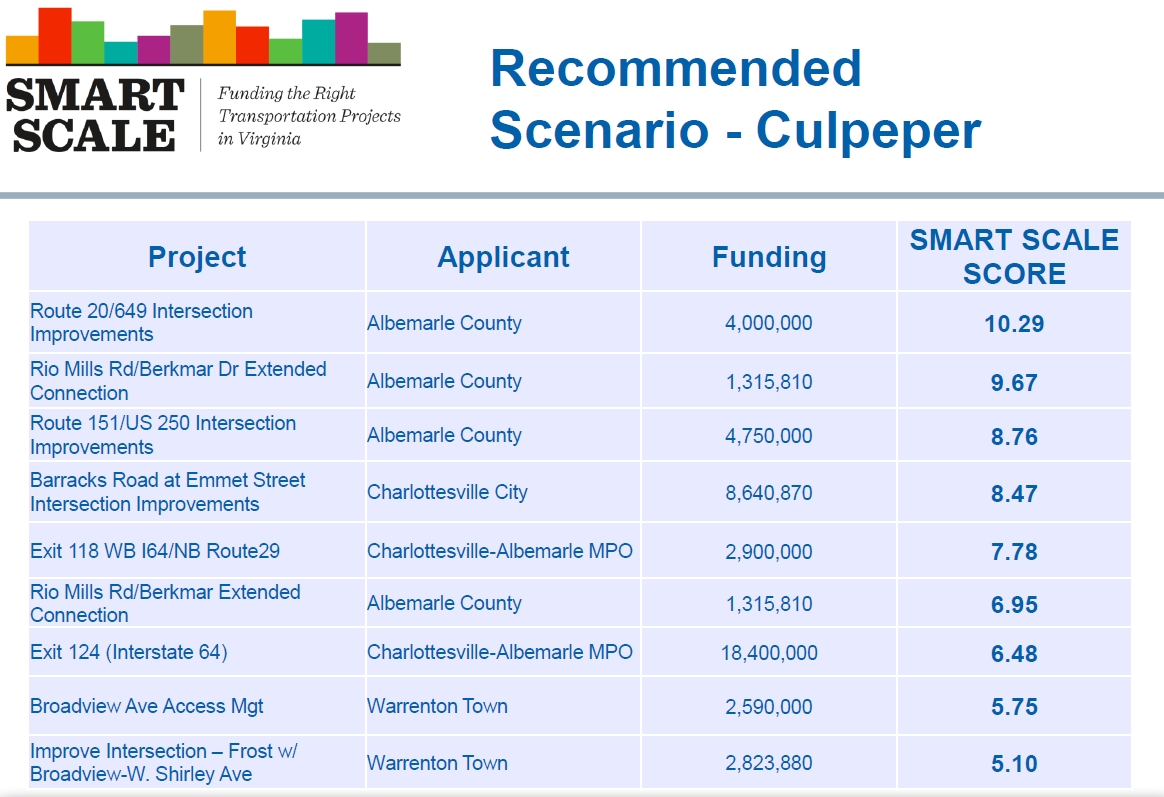 Five road projects in Albemarle County and one in Charlottesville have received qualifying scores in the first phase of the Virginia Department of Transportation’s Smart Scale prioritization process.

“This is the very beginning of a five-month discussion about these projects,” Nick Donohue, Virginia’s assistant secretary of transportation said Tuesday, shortly after scores were revealed to the Commonwealth Transportation Board.

The Smart Scale process was mandated by legislation in the 2014 General Assembly that requires that all transportation projects to be ranked on a set of criteria, including relieving congestion, increasing access to jobs, promoting economic development and improving safety.

This is second time the Commonwealth Transportation Board has gone through the process, and the appointed body will not make a final decision on funding until June.

Local projects in Albemarle that received a preliminary recommendation from staff include:
» $4 million to improve the intersection of Proffit Road with Route 20;
» $1.3 million to connect Rio Mills Road and Berkmar Drive;
» $4.75 million to bring a roundabout to the intersection of Route 151 and U.S. 250;
» $2.9 million to add an additional lane for motorists on northbound U.S. 29 to have more space to access Fontaine Avenue;
» and $18.4 million to upgrade exit 124 on Interstate 64.

An $8.6 million project to improve the intersection of Emmet Street and Barracks Road in Charlottesville also made the preliminary cut, but an $18 million request to help pay for the West Main Streetscape was not recommended for funding.

An application for $45.8 million made by the Charlottesville-Albemarle Metropolitan Planning Organization to add additional lanes on Free Bridge and build a bridge for pedestrians was not recommended for funding in this cycle. The MPO also was unsuccessful in a $6.75 million request to make safety improvements at the intersection of U.S. 29 and I-64.

There is just over $1 billion in funding available in two different pots of money. One is $658.8 million set aside for “high-priority projects” and $358.9 million to be split between the districts.

There had been $568 million available in funding in this second Smart Scale round, but the amount was increased by $450 million thanks to the cancellation of a light-rail transportation project in Virginia Beach and a decision to pay with tolls the widening of I-66 inside the Beltway.

In all, Donohue said there were 404 applications for $8.5 billion in funding requests in this round. That is 35 percent more applications than last year.

In the first Smart Scale round, Charlottesville received $29.5 million for improvements to three streetscapes, whereas Albemarle County receives none.

“I’d say the differences between this year and last is that we worked closely with VDOT at the residency level to right-size the projects, making sure we weren’t overbuilding, which ultimately decreased the cost,” said Kevin McDermott, the county’s transportation planner.

“We also selected projects that had numerous benefits, including those that we could include data to emphasize the economic benefits of and also addressed existing safety problems,” he added.

Donohue said other Virginia cities and counties also have learned from experience.

“Localities are still adjusting from the old [funding] formula, where each year they got their secondary or urban allocation, which typically was not enough to ever build anything, but they were guaranteed a crumb of the pie,” Donohue said. “Under Smart Scale, we are no longer giving them a crumb because we want to make sure the projects are fully funded.

Donohue said that means that some communities may not receive funding in a given year.

This year, Albemarle was not successful in getting several other projects recommended for funding, including $8.6 million to rebuild intersection of U.S. 250 and Route 240, $7.25 million for improvements on U.S. 250 near Blue Ridge Shopping Center and an extension of Berkmar Drive to Airport Road.

Aubrey Layne, Virginia’s secretary of transportation, said he has heard many critics of the process say that Smart Scale is not building infrastructure needed for Virginia’s future, but VDOT has many existing problems to address first.

“There are many good projects that are not going to get funded, not because they are not good projects, but there are so many immediate needs,” Layne said.

The General Assembly is considering several bills that would take certain projects out of the process, such as the Coalfields Expressway and U.S. 460. Layne said he hopes legislators can respect the process.

“We are using the monies we have as effectively as we know how,” he said, adding that Smart Scale guides those investments.

There is another $41 million in district funds that have not yet been assigned to any project, including $5.7 million for the Culpeper District, which includes the Charlottesville area.

The next deadline to apply through Smart Scale will be in the end of September 2018.