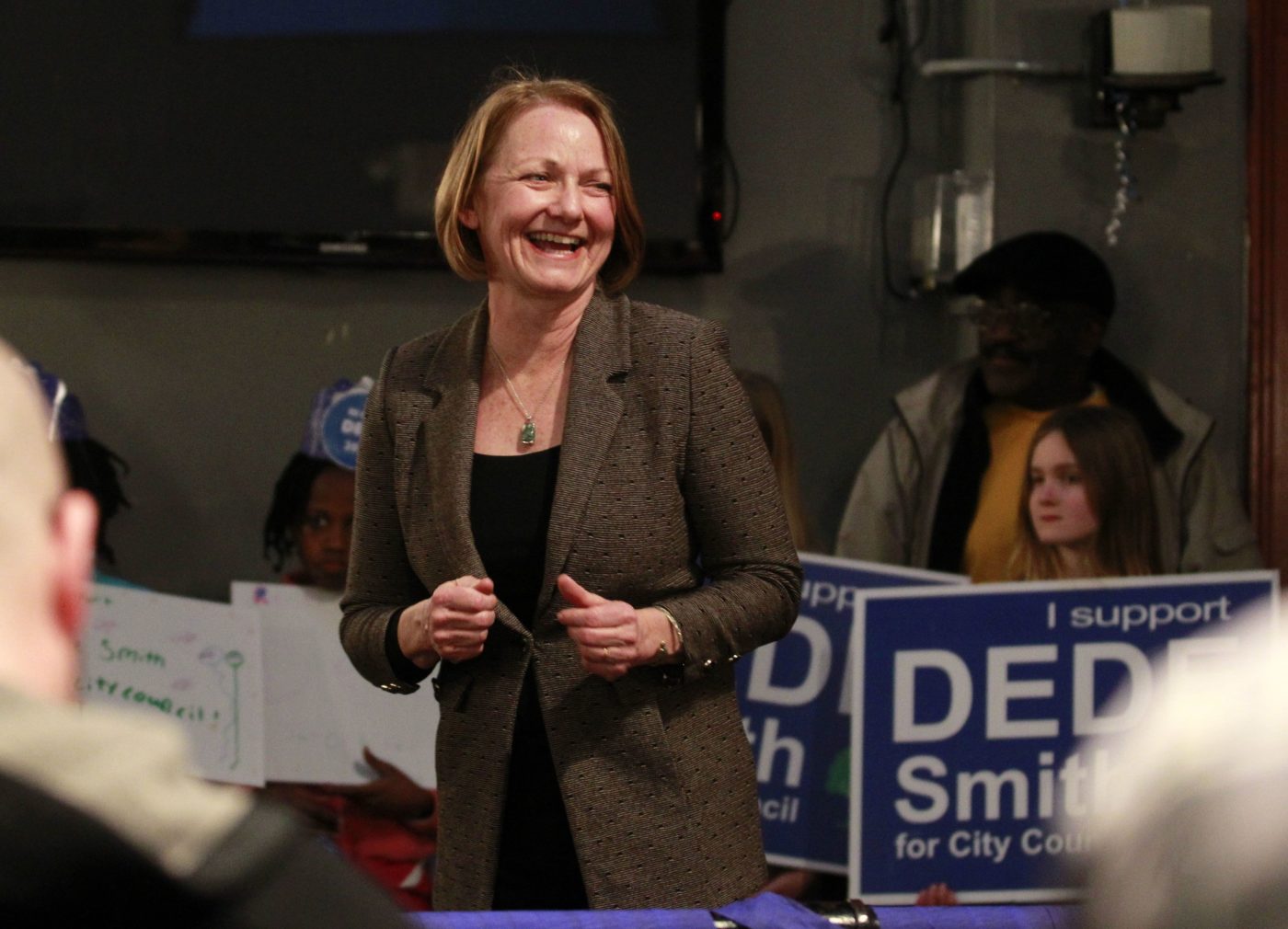 “We are 250 years old and we have so much history here that speaks volumes about who we are today,” Smith said.

Smith, 59, made her announcement at the West Main Restaurant, which operates out of a 19th century structure that is one of only a few buildings to survive the urban renewal of the city’s Vinegar Hill neighborhood in the 1960s.

Fellow incumbent Kathy Galvin has filed paperwork with the city registrar but has not yet made a formal declaration.

The City Council will have at least one new member because Mayor Satyendra Huja is not running for a third term.

City Democrats will select three candidates in a June 9 primary. Charlottesville Republicans have yet to decide on what their nomination method will be.

Smith was born in Springfield, Vermont, and received a degree in microbiology from the University of Michigan. She is married to Tim Wilson, a professor of psychology at the University of Virginia, and has lived in the city’s Fry’s Spring neighborhood for 35 years.

Smith served as an appointed member of the School Board from 2000 to 2006. She has also served as director of the Ivy Creek Natural Area.

Smith was introduced by former Charlottesville Mayor Dave Norris, who served with her during his last two years on Council.

“It was an honor and a privilege not only because she was a good ally on so many causes, but more importantly she was a good friend,” Norris said. “She has been a friend to our community as a champion for conservation and environmental stewardship.”

“We get so many awards as a city and it’s not because we have huge developments on West Main Street,” Smith said. “My focus will be on those things that make Charlottesville the happiest and the best city to live in.”

To keep getting those accolades, Smith said, the city needs to preserve its historic buildings and protect its natural resources.

Smith said she was the only councilor to vote against a special use permit allowing for the Flats at West Village apartment on West Main to have additional height and density.

“West Main is emblematic of the struggle between the growth in Charlottesville and maintaining our character,” Smith said. “It’s going to be a real balance and I vow to help find it.”

Smith also said she is skeptical about raising the meals tax from 4 percent to 5 to raise an additional $2.1 million for education and to hire new police officers.

“I’m very concerned about using a rise in the meals tax for what is being proposed,” Smith said. “When you implement a tax like that, which has a sweeping impact and has a lot of revenue associated with it, I believe it should be used for a tangible ongoing project like infrastructure.”

Smith said she would like to work with Albemarle County to talk about ways both communities can reach efficiencies by sharing services.

One of her accomplishments, Smith said, was to get more 100 acres of natural habitat added to the parks system to make up for land that was flooded to expand the Ragged Mountain Reservoir.

“It broke my heart to have four sites eligible for the National Register of Historic Places be demolished as part of the [water supply plan],” Smith said. “I vowed we would get the land back.”

Smith said those acquisitions include the city’s original quarry, Hartman’s Mill, and the original spring owned by Joshua Fry that gave her neighborhood its name.

As a member of the Charlottesville Area Transit advisory board, Smith pushed to create a training program to hire new bus drivers from within the city.

“Now we have 12 CAT drivers who are city residents who formerly didn’t have jobs but now they earn a living wage,” Smith said. She added that new job training programs are in the works to train new office workers and positions to increase environmental efficiency.

Smith also was praised by a woman who ran alongside her in the 2011 City Council race.

“My respect for her has grown that much more,” said Colette Blount, who came in fifth place during a seven-way race for three Democratic slots in an August 2011 firehouse primary.

“She has a very comprehensive outlook on the city and maintains a good understanding of what remains important to the people of Charlottesville,” Blount said.