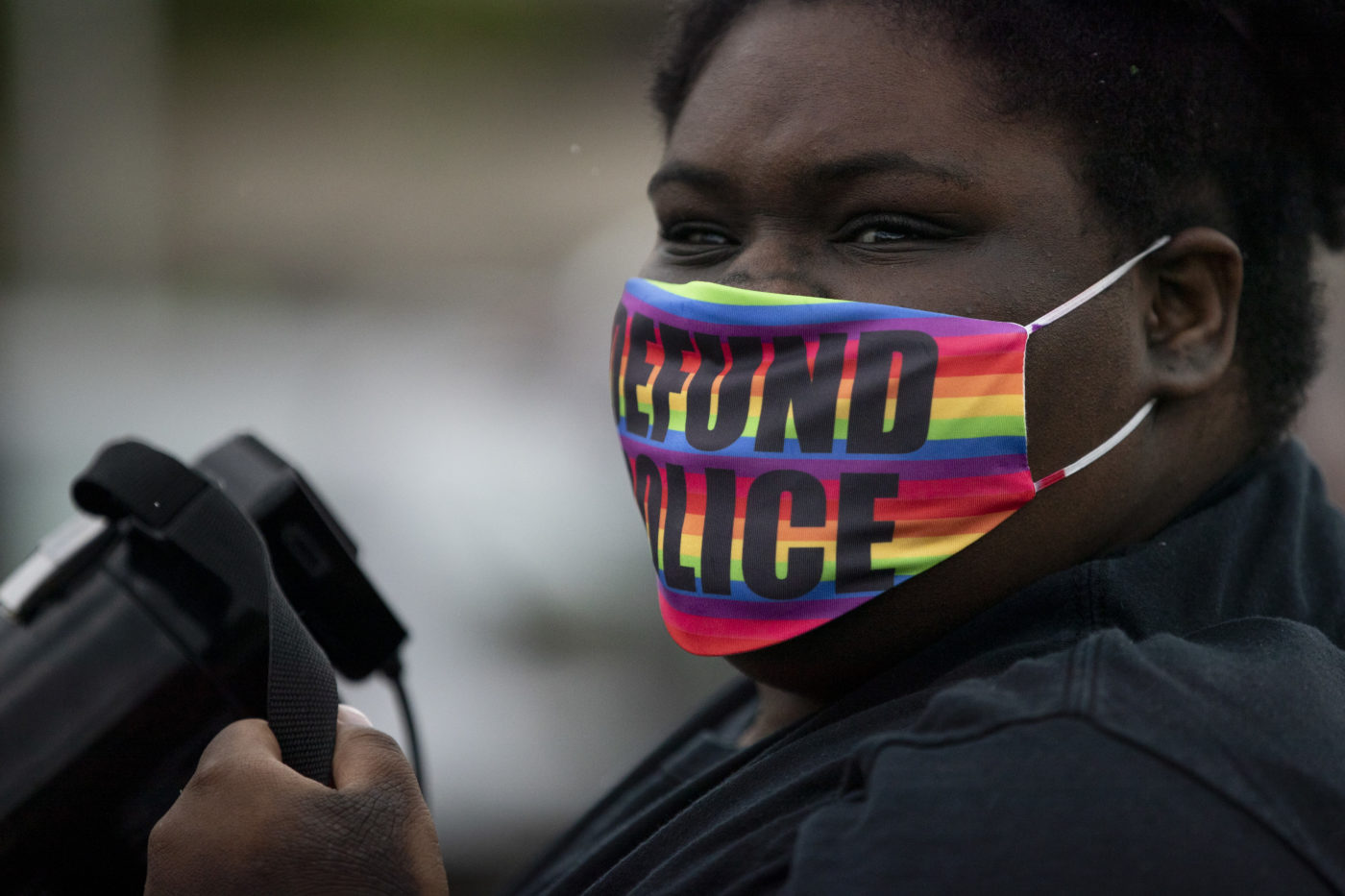 An organizer wears a protective mask during the Defund the Police Block Party on June 13.

As activists call for police department defunding, Charlottesville city leaders say they don’t have enough information about the Charlottesville Police Department’s structure or budget to even begin having that conversation here.

“My problem as a councilor right now is that the police department is kind of like a black box to us,” Councilor Lloyd Snook said.

“That, most of the time, hasn’t been an issue. But right now, it’s an issue because people are asking us to take some very specific actions that we don’t have the information for.”

In the past weeks, hundreds of protesters have taken to Charlottesville’s streets calling for the police department to be downsized or outright abolished. Meanwhile, local activist groups have demanded city leaders have a meaningful conversation about reforming the department.

Charlottesville Police Chief RaShall Brackney did not respond to requests for comment on the issue.

She has previously spoken in favor of what she calls “decoupling” police departments.

During the June 8 Albemarle-Charlottesville NAACP’s Citizens Conversation with Law Enforcement Officials, she said police officers should not be responsible for responding to societal issues like homelessness and mental health.

Brackney did not respond to the email, and shortly after this story first appeared online, a spokesman said that the department declined to comment.

Charlottesville Tomorrow also requested interviews on the topic of defunding police from all five city councilors. Snook gave an interview, Councilor Heather Hill declined to speak on record and Councilor Michael Payne and Mayor Nikuyah Walker did not respond.

Councilor Sena Magill said, “You want to do what is right as best as you can. If we had the magic wand and an exact right answer that we know would work, we would do it.”

And the city’s spokesman, Brian Wheeler, emailed the following statement:

“We believe the city of Charlottesville will always need professionals and resources dedicated to public safety and law enforcement. We expect funding priorities and best practices to be the topic of future discussions by Charlottesville City Council.”

But for those discussions to happen, some say the community needs more information about how the department is structured — and how it spends its $18 million annual budget.

In response to multiple requests for the police budget this month, the department has released a series of budget documents, each containing varying levels of detail.

On June 12, it posted to its website a batch of budgets from the last five years. Each budget document contained one to two pages of around 60 to 80 line items. Thirteen of those line items were for salaries and benefits, with more than $8 million budgeted for “full time salaries.” The remaining line items described broad administrative and operating costs — things like rent, travel and meals.

“When you ask for that budget, you only have a two-pager, versus if you ask city schools they have a 150-page budget,” said Harold Folley, a community organizer with the Legal Aid Justice Center and The People’s Coalition, a local activist group.

“We need to figure out where that $18 million is going,” Folley said. “When you talk about defunding or reinvesting, you need to find out what the budget looks like. You don’t want to cut the wrong things.”

Folley sent a letter on behalf of The People’s Coalition to the city council and to City Manager Tarron Richardson on June 19 asking for a more comprehensive and programmatic budget to be released.

If the city lacks such a budget, it should demand it be produced by the police department, the letter said.

Meanwhile, on June 16, Charlottesville resident Matthew Gilikin requested a budget that contained more details, including individual police officer salaries, which the department sent him on Thursday.

The department then on Friday sent The People’s Coalition a different three-page categorized budget for the fiscal year 2021 that contained 85 line items. That budget was similar to the ones the department posted to its website on June 12, though it broke down some broad topics — like training and equipment — into more specific subcategories.

Folley said none of the budgets released thus far contain the information he’s looking for.

“It’s not about who is getting paid,” Folley said. “It’s what services could be cut that they really are not in the business of doing. If it’s not public safety, can it be put into housing, youth programs or mental health to make those programs sustainable.”

This issue is not unique to Charlottesville, said Jesse Jannetta, a senior policy fellow at the Urban Institute’s Justice Policy Center, a nonprofit economic and social policy research institute based on Washington, D.C.

“One of the top challenges often when you look at budgets is there are lines for things like personnel and equipment,” Jannetta said. “These are very broad budget categories. When you’re thinking about redirecting resources, or you’re thinking about taking specific action, it can be very hard to determine from these broad categories what to cut.”

‘Time to have this discussion is now’

Councilor Snook is calling for the community — and the council — to have defunding conversations now to give the city time to include any changes in next year’s budget.

Typically, the city holds budget work sessions through the winter before adopting a final budget in the spring.

There is a lot to work out before that process begins, he said.

Some local protesters have called for the outright abolition of Charlottesville police. Hundreds filled the intersection of Barracks Road and Emmet Street on June 13 with that message at the Defund the Police Block Party.

Organizers of the event said police officers should be entirely replaced by other types of trained personnel.

“This means that instead of calling the police when someone is going through a mental health crisis, we call a trained social worker to aid in their care,” said Althea Laughon-Worrell, a Virginia Commonwealth University student and Charlottesville High School graduate, who helped organize the event.

“Instead of calling the police to talk down a violent offender you call someone who is trained to de-escalate the situation rather than respond with more violence.”

Laughon-Worrell said there needs to be a more constructive approach in responding to emergency calls.

She would like to see funding that has gone toward law enforcement be redirected into community programs or organizations.

The People’s Coalition’s Folley echoed some of Laughon-Worrell’s points. He said to think about defunding as reinvesting.

He cited the Charlottesville School Board’s decision to remove school resource officers from city schools as an example. The school district may be able to redirect that money elsewhere.

That’s something former Charlottesville City Councilor Wes Bellamy, who served from 2015 to 2019, has experience with.

As a councilor, Bellamy worked to reallocate funds for projects during his tenure. He said there’s a way that divesting police funding and relocating it to other things is possible in Charlottesville.

“It’s something that’s doable if there’s a political will,” Bellamy said. “I think in a time like now, we have to challenge ourselves to do so. There’s no reason, in my personal opinion, that we can’t look at even shaving 2%-5% of the city’s budget or the police budget if we wanted to start small.”