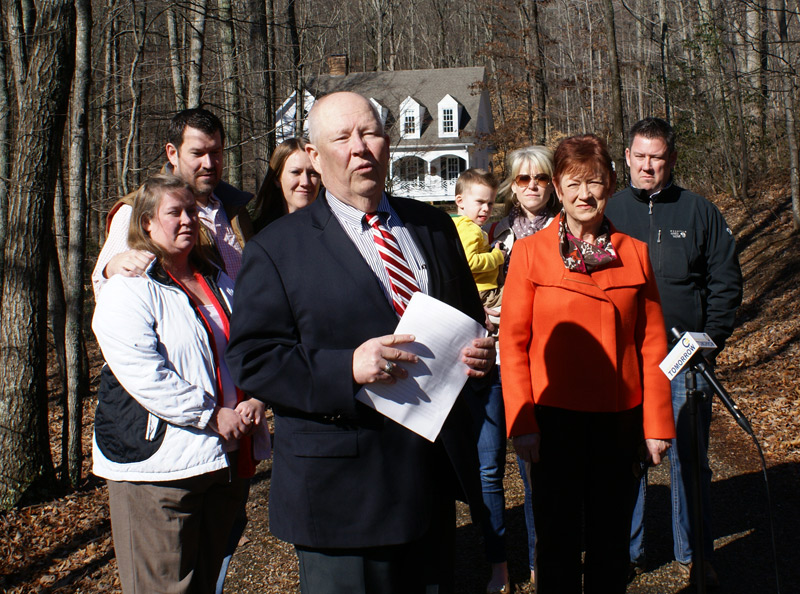 http://s3.amazonaws.com/cville/cm/mutlimedia/20130227-snow-announcement.mp3 Duane Snow - Board of Supervisors Candidate InterviewVideo: Duane Snow's Board of Supervisors campaign announcementDuane Snow announces campaign for Albemarle Board of Supervisors
Republican Duane Snow announced Wednesday he will run for a second term to represent the Samuel Miller District on the Albemarle County Board of Supervisors.
“Although I feel a lot has been accomplished over the past three years, there is much more that we need to do,” Snow said.
Snow, 68, was flanked by members of his extensive family as he made his announcement on a wooded driveway in the Redfields subdivision.  In the background were some of the acres of land that have been the subject of a rezoning dispute in the past few years.
In 2011, the developer of Redfields had sought to rezone 58 acres of land to build 126 homes. The Board of Supervisors denied the request, but residents were concerned that the land would ultimately be developed.
However, Snow said he worked to bring both sides to a compromise.
“The developers agreed to sell the land to the residents at a very good price and the residents last Friday purchased the land,” Snow said. “The land will be put in permanent conservation easement as a result of a county program that accepts these easements.”
Stuart Lowson, a member of the homeowners association’s board of directors, confirmed that the sale was completed on Feb. 15. The association paid $800,000 for the land, resulting in a $15 monthly increase in each member’s fees.
“He was helpful in helping us in communications with the county to reassure us that the easement was a possibility and that we would receive a tax credit to offset the purchase of the land,” Lowson said.
Snow said when he announced his first candidacy in 2009, he pledged to protect Albemarle’s landscape.
“We kept our promise of keeping the county 95 percent rural,” Snow said. “We’ve also added about 1,500 acres to conservation easements last year for a total of approximately 88,000 acres.”
However, Snow did not rule out consideration of future expansions of the growth area because he said the loss of Biscuit Run reduced the amount of land available for future development.
“Right now we’re probably down around 4.5 percent because of Biscuit Run and other areas that have been placed under conservation easement,” Snow said.
Snow said another accomplishment has been the ability to keep rural schools such as Scottsville, Yancey and Red Hill elementary schools open. There had been talk about consolidating the schools to save money, but the idea was abandoned.
“Despite of the financial crisis that we experienced, we provided the needed capital to fund our schools so they could continue to operate on a reduced budget but still maintain the excellence of Albemarle County schools,” Snow said.
Snow also said he is pleased that the city and county adopted the community water supply plan during his first term.
“The [Ragged Mountain] dam is in the process of being built, which will ensure our water needs well into the next century,” Snow said. “We dealt with this challenge now so that our next generation will not have to.”
If elected to a second term, Snow said he wants to invest in additional space for schools, continue enhancing Albemarle’s economic development efforts, and find ways to increase internet access to all of the Samuel Miller district.
In 2009, Snow was in a three-way race with Democrat Madison Cummings and Independent John Lowry. Snow received 2,275 votes to Cummings’ 2,011 and Lowry’s 784.
Valerie L’Herrou, the chair of the Albemarle Democratic Committee, said her party will field a candidate but their potential recruit is not yet ready to make an announcement.
Two other Supervisor seats are up for election in Albemarle County this November
Republican Rodney Thomas announced last fall that he will seek a second term to represent the Rio District.
Independent Dennis Rooker has not yet announced whether he will seek a fourth term.  He did not respond to a request for comment.
Rooker ran unopposed in 2009, but a Republican official said that will not happen this year.
“We do not have [a candidate] specifically but we are looking in earnest and there is no doubt in my mind that we will have one,” said Cindi Burket, chair of the Albemarle County Republican Committee. “There is a lot of interest.”
Burket said if there are multiple candidates from the party for the Jack Jouett seat, there will be a mass meeting in April.