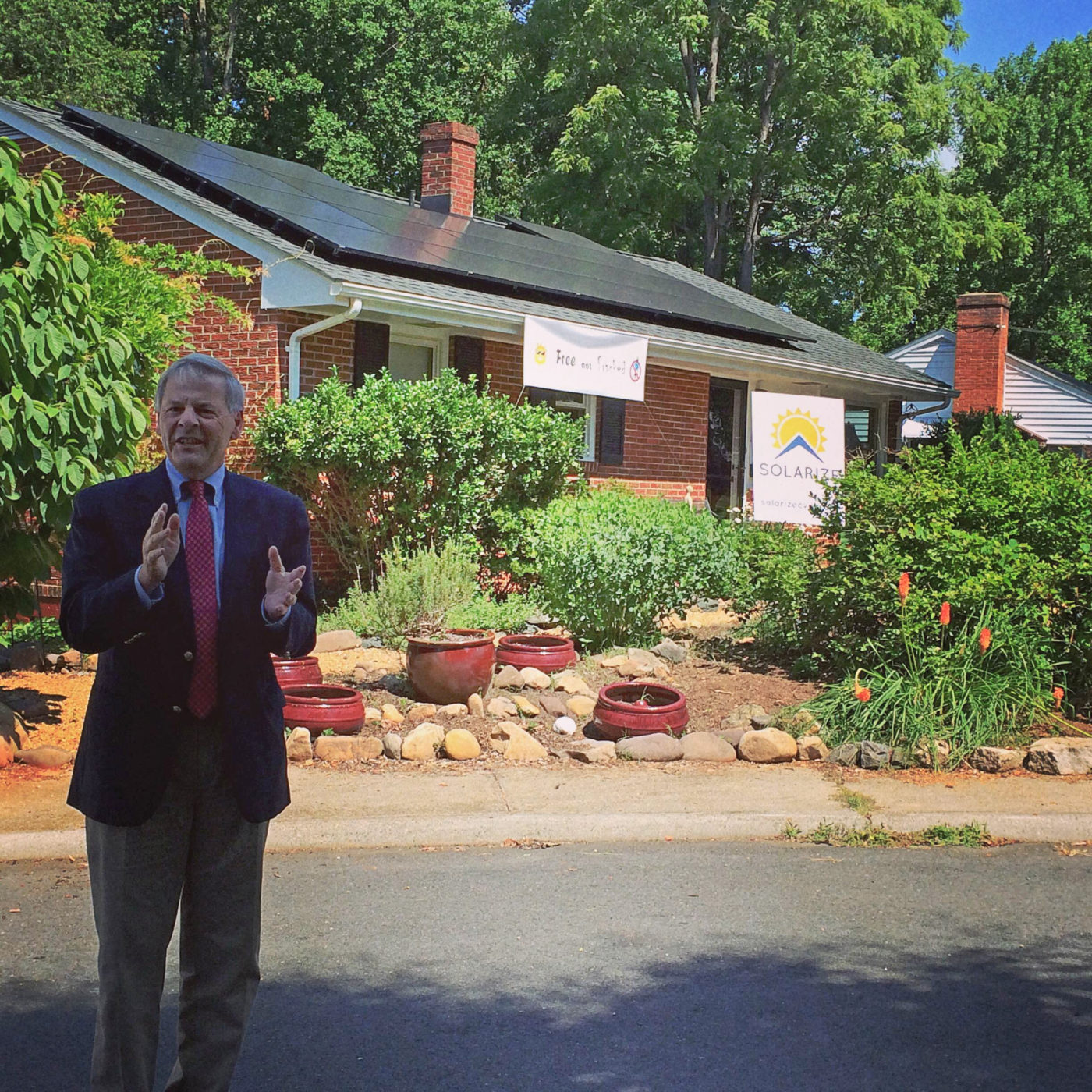 Deep in the Fry’s Spring neighborhood, Monte Vista Avenue is usually a quiet street. But Tuesday morning, a group of close to 30 people gathered in front of Jack Wilson’s home.

An early adopter of solar energy, Wilson played host to the launch of Solarize Charlottesville, a 90-day community-outreach program sponsored by the Local Energy Alliance Program, in partnership with the City of Charlottesville, Albemarle County, and the University of Virginia Community Credit Union.

Jon Proffitt, LEAP’s program manager in Charlottesville, cited Wilson’s house as a model for the community.

“It’s really the participants that are making this work,” Proffitt said. “As the community rallies behind solar, local suppliers…are able to lower their prices to basically record lows, which then makes more people interested.”

While there’s general awareness of solar power as an energy source, one local official said that technological changes have delivered new, cost-saving improvements.

“The potential is immense for this kind of technology,” said House Minority Leader David J. Toscano. “Even recently there’s some new technology that’s come out that’s going to cut the cost of solar panels dramatically and get rid of some of the toxicity of those panels.”

Through the 90-day duration of the program, both companies are offering a 15 percent discount on solar equipment, which will nearly cut the cost in half when combined with a 30 percent Federal tax credit. LEAP is also offering free home assessments and has set a goal of 50 home installations.

Additionally, Solarize Charlottesville’s partnership with the UVa Community Credit Union is allowing participants to apply for a Power Saver loan program, which includes an interest rate reduction in which closing costs are waived.

“As a not-for-profit financial institution, our role in this initiative is to help homeowners overcome the financial barriers to make solar panel installations,” said Rebecca Cardwell, vice president of community relations at UVa Community Credit Union.

Still, not all homes will be good candidates for solar energy. If a home lacks a south-facing expanse of roof, solar panels are minimally efficient.

“My house is not solar suitable, unfortunately,” said Tim Leroux, LEAP’s director of operations. “It’s tragic. We have these enormous trees that cover our south-facing roof.”

However, if solar energy cannot be implemented at a site, Solarize Charlottesville promises to help homeowners find other energy solutions.

“We were able to reduce our energy bills by 50 percent just by tightening up the house,” said Leroux. “That’s a way of helping, and it makes our house a lot more comfortable.”

“Having been on the Board at LEAP since the beginning, I’ve been thrilled at the progress that they have made, the investments they have brought and encouraged us all to make in the City and the County,” Mallek said.

For Wilson, his solar panels are a constant reminder of other experiences with energy.

“I used to be a coal miner,” Wilson said. “My job was actually to go down underground several miles and physically shovel coal. I like to stand out here and think that nobody’s breathing coal dust.”

Wilson reported that his electricity bill was only $28 last month, compared to neighbors who admitted to paying up to $260.  According to Solarize Charlottesville, a 3 kilowatt rooftop solar panel system costs about $9,900 before tax credits are applied.

By the end of Tuesday’s event, LEAP received word that 5 homeowners had already committed to install solar panel systems.

The UVa Community Credit Union is hosting a seminar on Tuesday, July 8 at 6;00 p.m., when they will present more information regarding financing options and modeling costs over time.