SoundPipe Therapeutics draws expertise from UVa, others to find cures 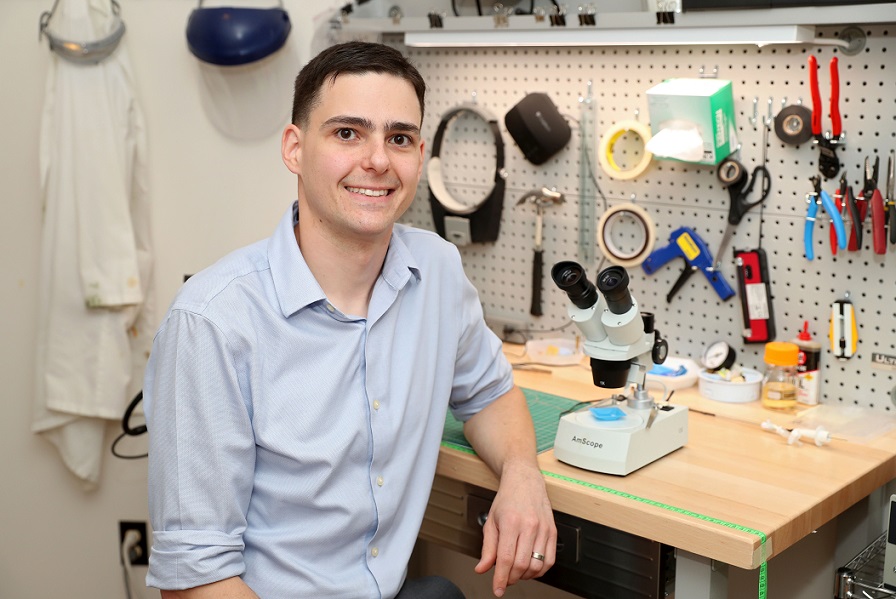 While some Charlottesville-area technology startups operate in a world of code and cloud computing, SoundPipe Therapeutics’ focus remains centered around a workbench.

Joe Kilroy, co-founder and chief technology officer at SoundPipe, regularly uses pliers, tweezers and a soldering iron to fine-tune the design of a groundbreaking medical device.

“We’re not doing anything extra fancy; the priority is gaining knowledge,” Kilroy said. “Getting this technology to patients is what I’m excited about.”

SoundPipe Therapeutics is developing a novel drug delivery platform to treat critical limb eschemia, a severe obstruction of the arteries that reduces blood flow to the legs.

CLI, a form of peripheral arterial disease, affects 30 million people worldwide. CLI can be extremely painful, and about 25 percent of patients must have part of their leg amputated as a last-resort treatment. The condition is associated with a high risk of a heart attack and death.

CLI and other arterial diseases can be treated with an angioplasty — a procedure in which a tiny balloon is threaded into a blood vessel and inflated to clear a blockage.

Doctors often use balloons that are coated with drugs that prevent the blockage from returning. Another method involves inserting a stent, a plastic mesh structure.

SoundPipe’s flagship product, GUIDE-Tx (Guidance by Ultrasound Imaging and Delivery Enhancement of Therapeutics), is designed to allow doctors to observe disease inside a blood vessel while administering drugs at the same time.

The GUIDE-Tx system consists of a single-use catheter attached to a console with a motor, computer, monitor and driving circuitry for the catheter.

The sound waves produced by the vibrating crystal force lipid “microbubbles” containing a drug onto the inner walls of the blood vessel. The reflected sound waves cause the crystal to vibrate more and send electrical pulses back to a computer, which can convert this information to an ultrasound image.

The GUIDE-Tx motor spins the torque coil inside the catheter’s plastic sheath at 2,000 rotations per minute in order to completely “paint” the targeted area with the drug. It also enables the creation of a 360-degree image of the blood vessel.

GUIDE-Tx has not yet been used on humans. SoundPipe has tested the system on excised arteries and on live pigs, and Kilroy said the company is preparing to conduct a more robust study with these subjects, “to show definitively that the technology works.”

SoundPipe grew out of research that Kilroy did as a doctoral student in the University of Virginia’s Department of Biomedical Engineering from 2008 to 2013. His research was supervised by professor John Hossack, who now serves as SoundPipe’s scientific adviser.

Hossack was recognized as one of the UVa Licensing and Ventures Group’s Innovators of the Year in 2016. His work on ultrasound and microbubbles for drug delivery has been commercialized through two other Charlottesville startups — PocketSonics and Rivanna Medical.

“[GUIDE-Tx] can deliver the drug exactly when and where and you want it to,” he said.

Before founding SoundPipe, Hossack and Kilroy received support for their work from the UVa-Coulter Translational Research Partnership, which awards grants for biomedical engineering research at UVa.

“What [SoundPipe is] trying to do — delivering a drug payload to a site of interest — is, in some ways, the holy grail of medicine,” said David Chen, program director for the UVa-Coulter Partnership.

SoundPipe, like most biomedical startups, was a risky venture that required “a long runway” to gain momentum, Chen said.

“That’s where [the Coulter Partnership] adds value,” he said. “Instead of having researchers do spinouts too soon, we can keep them at the university a little longer.”

SoundPipe has been awarded nearly $400,000 in grants from Virginia’s Commonwealth Research Commercialization Fund, the National Institutes of Health and the National Science Foundation. Kilroy said the company also recently closed a round of private investment.

As part of the NIH Innovation Corps, the SoundPipe team interviewed more than 55 doctors to better understand how the Guide-Tx could help their patients.

“The grants have been really helpful for getting things started, and they are a great source of validation for us,” Kilroy said.

Before pursuing a doctorate in biomedical engineering, Kilroy worked as an electrical engineer for the Naval Surface Warfare Center’s Carderock Division. He helped to determine the radar signatures for new ships and vessels, including some experimental craft.

“I could see what the future looked like, while taking care of folks who were on active duty,” Kilroy said.

Kilroy, 33, said that growing up in a family with many nurses and emergency medical technicians inspired him to use his engineering skills to help people with diseases. He said his understanding of radar systems gave him a solid foundation for research on medical ultrasound.

“It’s not an easy transition, but it is a logical one,” Kilroy said.

SoundPipe is Kilroy’s first startup, but several seasoned scientists and entrepreneurs have joined him in leading the company.

“We brought together a team that is uniquely positioned to get this technology to market,” Henry said. “People gravitate towards others who they can trust, respect and get along with. The people are always more critical than the idea.”