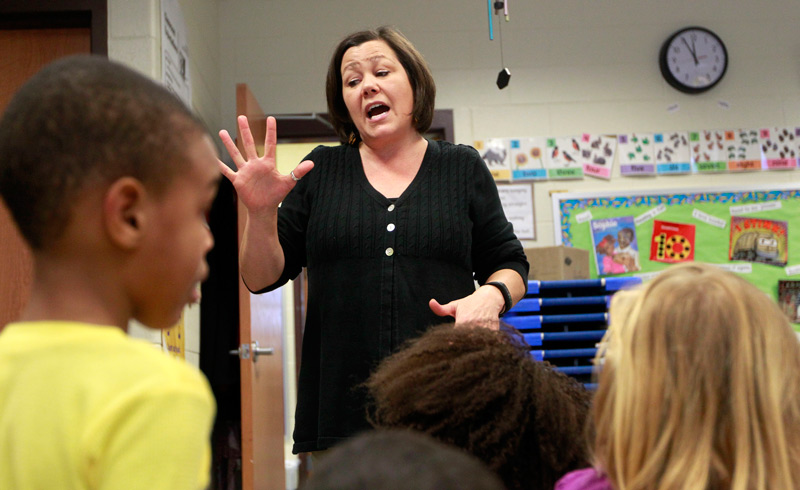 As Albemarle County has watched the waiting list for the Bright Stars preschool program grow to about 90 in the last two years, officials have found a group of between 50 and 75 children in one neighborhood alone are eligible for pre-K services in the fall.

However, with only 16 open seats left in the two Bright Stars classrooms at Cale Elementary School, many 4-year-olds who live in Southwood Mobile Home Park — the area’s largest concentration of affordable housing — will miss out on the services that educators and early childhood education advocates say will help the students begin kindergarten on grade-level.

“The point is that these children will be served by the school system. They’re coming and they’re going to be served as kindergarteners,” said John Freeman, Albemarle’s assistant director of social services. “So from the perspective of the preschool experience, their readiness is a legitimate concern and a legitimate issue.”

The initiative’s model has students attend preschool in their home elementary schools, and many School Board members have argued that doing so builds community with the families and eliminates what can be a hard transition for the children.

During a press conference Tuesday at CitySpace, one local nonprofit offered another solution.

“I would like to see [a pre-K location] at Southwood because the neighborhood feel is already very strong there,” said Dan Rosensweig, president and chief executive officer of Habitat for Humanity of Greater Charlottesville, the organization that is planning to redevelop the neighborhood. “We’d like to provide the space and the connection to the community, because … that’s what the residents have said that they want.”

Habitat officials said Southwood is home to 400 families. Of the 1,500 people in the neighborhood, 600 of them are children.

“I think the situation is fairly dire,” Rosensweig said. “And even though we’re not going to make an application to the county to have a joint-run program with the county this year … we’re still looking, potentially, for an incremental, at least one-year fix for the kids who are coming through this year.”

Freeman said county officials are beginning to examine the move, but noted that operational and licensing issues would need to be ironed out since the location would not be at a public school.

What’s more, Freeman said, it might be time to think about addressing the growing demand for pre-K services in creative ways.

“While we think that the model we developed is a successful one, we may need to look not at changing the model so much as adding another model, and thinking in terms of an expansion of a network of pre-K services that make for greater availability,” Freeman said.

Despite the desire to serve the students in Southwood, Gloria Rockhold, community engagement manager for Albemarle County Public Schools, said the neighborhood would still need a facility.

“We don’t have a dedicated classroom trailer that we can use,” Rockhold said Tuesday. “My understanding is that there is a spot where we can put a classroom trailer in, but we just haven’t been able to figure out the financing and the logistics of how to make that happen.”

But School Board member Steve Koleszar, who is an advocate for serving the students at their home schools, said Tuesday that using a trailer would be insufficient.

“We recognize the need and would like to address it…but a trailer can only hold 20 to 25 kids, so I think it’s a much bigger problem that needs to be addressed,” Koleszar said.

“The plus for having Bright Stars kids go to the school is that they get comfortable with the school and they start relating to the other kids at the school, and they get to know the teachers and principal,” Supervisor Jane Dittmar said. “The negative is that it is harder for the parents to interact.”

“This neighborhood would be the one to try this out on because they have so many kids right there in critical mass,” Dittmar added.

Schools officials have estimated that the total number of four-year-olds in the entire county who would be eligible for Bright Stars is about 230—a figure based on the school division’s kindergarten free- and reduced-lunch population—and Social Services officials said that figure is a reasonable estimate.

Regardless, Freeman said, it’s clear that Albemarle is “coming up short.”

“We’re consistently not able to serve a significant population who are unlikely to use private preschool providers,” Freeman said.

Now in its 19th year, Bright Stars — which is administered jointly by Albemarle County Public Schools and Albemarle’s Department of Social Services — provides comprehensive social services for preschoolers and their families until the child completes fifth grade.

This year, Bright Stars serves about 160 students in 10 classrooms at eight schools, though some of those children are funded through Title I and Head Start.

According to the Bright Stars annual report for fiscal year 2014, which program coordinator Ann McAndrew presented to the Board of Supervisors on Wednesday, the program is helping students to make academic gains.

In fall 2013, only 19 percent of Bright Stars students met benchmark scores on the pre-K Phonological Awareness Literacy Screening, which is used as a predictor of future academic performance. By spring 2014, that number jumped to 68 percent.

Additionally, 86 percent of Bright Stars students met benchmark scores on the kindergarten version of the test, showing that the students’ learning holds up over time.

Similarly, 22 percent of Bright Stars students passed the Math Quick Screen assessment in the fall 2014, compared to 71 percent in the spring 2014.

Moving forward, Dittmar said she doesn’t want money to stand in the way.

“I’m hoping that a lack of funding doesn’t keep us from skipping this issue this year,” Dittmar said.

Freeman said he thinks that the on-going conversations about Albemarle’s pre-K future are “leading towards some kind of decision around strategy that can be supported.”

“I think there is momentum building towards some kind of expansion of our ability to serve,” Freeman said. “Bright Stars started with one classroom and it was experimental to see if we could do this as a collaboration. Then we added a second classroom, and it’s grown organically over the years.”

“As it’s grown and demonstrated its success,” Freeman added, “the community has also grown, and the need has grown.”