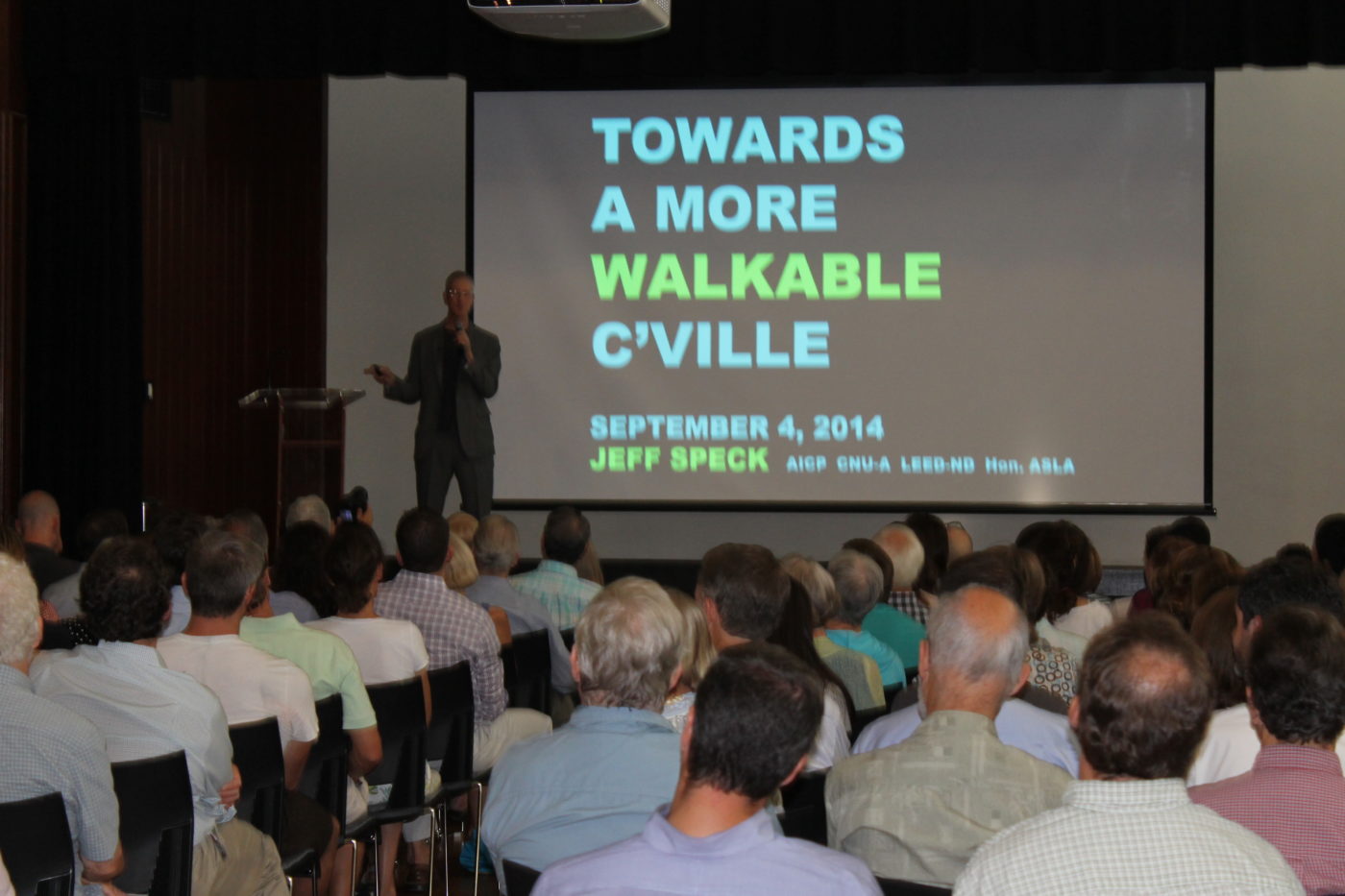 One of the nation’s leading experts on making cities more walkable said Charlottesville has done many of the right things to make its downtown a pedestrian-friendly destination, but more work can be done to improve safety.

“You’ve got the framework already for a lifestyle that is not automotive dependent,” said Jeff Speck, an urban designer whose book “Walkable City” offers localities tips on how to improve property values and sales tax revenues by improving the experience for those on foot.

“The challenges you face aren’t how to become a vibrant place where people want to be, but how to provide the best quality of life for those people who come here and to allow more of them to experience the best of what you have to offer,” he said.

The talk, titled “Towards a More Walkable Charlottesville,” was sponsored by Charlottesville Tomorrow and was held Thursday at the Jefferson School African American Heritage Center. More than 200 people attended.

Speck said to encourage people to choose walking as a means of transportation, localities need to make sure that pathways are useful, comfortable and interesting. But they also have to be safe, something that can be accomplished if traffic is slowed down.

“If you’re hit by a car going 35 miles per hour, you are eight times as likely to die as a car going 25,” Speck said.

Charlottesville frequently ranks as one of Virginia’s most walkable communities. Speck said to make downtown better, the city should consider removing center turn lanes on Water Street in favor of bike lanes, as well as add parallel parking to help merchants attract customers.

“Shops need parallel parking as a teaser even if almost all the parking is in the back,” Speck said. “Parallel parking is a barrier of steel that protects the sidewalk so you don’t feel unsafe walking in front of those stores.”

Jim Tolbert, the city’s director of neighborhood development services, said he was interested in studying a possible reconfiguration of Water Street.

The finishing touches are currently being put on a new streetscape plan for West Main Street. The current draft of the plan features the removal of about 30 parking spaces to make way for bike lanes, wider sidewalks and about 300 new trees.

Speck said he thinks existing conditions on West Main are pretty good and warned against over-spending on a new streetscape. He encouraged the city to retain as many mature trees as possible.

The plan also calls for removal of several traffic signals in favor of four-way stops. Speck supports this idea and said it would also reduce the amount of asphalt dedicated to vehicles.

The West Main Streetscape will be presented to the City Council in the fall, according to Tolbert.

Speck suggested that Charlottesville change its parking policies to reflect what he describes as the true cost of parking. He suggested the city reduce or eliminate a requirement that developers provide on-site parking.

“By taking the burden off of individual shop developers and housing developers and allowing them to do cash-in-lieu fees, you get the proper outcome and you don’t kill businesses,” Speck said.

The city’s economic development department is currently sifting through responses to a request for a consultant to conduct a new parking study. New ownership of the Charlottesville Parking Center means changes could be coming.

Speck also recommended increasing the number of homes downtown. He suggested that changing demographics are creating a demand for urban living.

“If you put more housing in your downtown center to get a better jobs and housing balance, you’ll have a more robust town center,” Speck said.

Another recommendation is that cities not tie pedestrian crossing signals at traffic lights to push-buttons. Instead, Speck said they should just come on automatically when the light changes.

Tolbert said the city is moving toward this, but it’s unlikely the push-buttons will be removed anytime soon.

One attendee who lives in Albemarle County said he hopes leaders there are open to Speck’s suggestions.

“The city of Charlottesville is doing great work promoting walkability and pedestrian-cyclist connectivity,” said Rex Linville, a land conservation officer with the Piedmont Environmental Council. “The surrounding area has a long way to go in providing the same level of connectivity and access.”

Speck’s talk centered on downtown Charlottesville, but he also offered comments on pedestrian life in parts of Albemarle.

“What’s missing from these half attempts at new urbanism is the proper connection between the residential and retail,” Speck said.

For instance, Hollymead Town Center is within a mile of several hundred homes, but there are no safe ways for pedestrians and cyclists to get there. Speck also said Stonefield would work better as a mixed-use community if there was not as much surface parking between residential and retail.

[View the story “Community Conversation with Jeff Speck” on Storify]