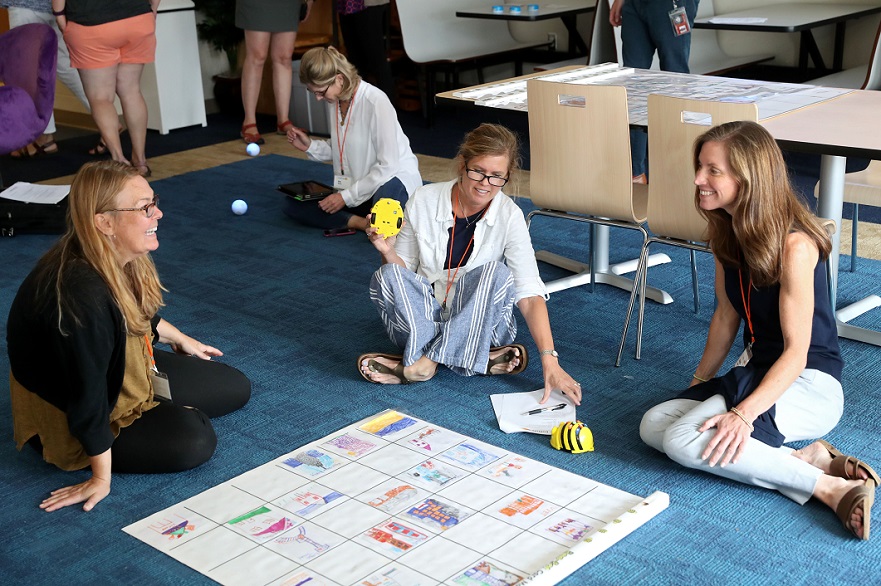 (From left) Caroline Kirby, Karen Riordan and McKenzie Inigo program directions to control a BeeBot at the "Robot Petting Zoo" during a Computer Science Institute for local educators at St. Anne's-Belfield School on Thursday, July 27, 2017.

Educators from Albemarle County and beyond came to the St. Anne’s-Belfield School this week to practice coding, try out new educational technology and to learn from their peers at a two-day Computer Science Institute.

The free event, which concludes on Friday, was open to all K-12 educators, after-school instructors and other organizations and individuals that work with young people. At the conference, teachers were encouraged to develop their own lesson plans that incorporated computer science.

In 2016, Virginia became the first state to add computer science to its core academic requirements for elementary, middle, and high schools. The Virginia Department of Education is drafting Standards of Learning for computer science this summer.

Kim Wilkens, who teaches computer science at St. Anne’s Lower School, said this week’s professional development institute was influenced by a hackathon the school has hosted for high school students in the Charlottesville region.

“Local technology companies have brought in real-world problems for students to work on,” said Wilkens. “We wanted to do professional development for teachers that was more like that.”

Jeffrey Spies, co-founder and chief technology officer at the Center for Open Science, gave the keynote address on Thursday morning.

Spies shared lessons from managing the COS internship program. Over the last three years, the program has trained 127 technical interns—29 of whom were hired as full-time staff.

Spies said that students— like COS staff and interns— can become better independent learners if they redefine the way they interpret frustration.

Spies said it was important for teachers to set limits on how often students can ask for help with their projects. “Too many questions doesn’t work,” he said. “But not asking enough questions is even worse.”

“Learning independently doesn’t mean you are learning alone,” Spies added. “As long as you have an internet connection, you are never alone … You can learn from the best developers in the world just by reading code.”

Spies also emphasized the importance of increasing diversity and inclusivity in the technology workforce. “As we solve significant problems we face in the world, we need more diverse people involved,” he said.

Spies said 35 percent of COS interns and 37 percent of software developers on the organization’s full-time staff are women.

“This isn’t where I want it to be,” he said. “We have a lot of work to do, especially [with recruiting] underrepresented minorities. We could do a much better job there.”

“It’s going to take our work as educators at [the K-12] level to change that,” said Zach Minster, a computer science instructor at St. Anne’s Upper School.

“You have to integrate computer science into the classroom for all students,” said Wilkens, who serves on the board of Charlottesville Women in Tech and founded the organization’s youth outreach program, Tech-Girls. “Once you make it an option, most girls are not going to choose it.”

On Thursday, St. Anne’s faculty and Upper School students demonstrated how computer science concepts could be taught through “unplugged” activities, like making bracelets with letters encoded in binary-patterned beads.

Maya Kumazawa, budget and management analyst for the City of Charlottesville, and Greg Burnett of Crutchfield gave seven educators a preview of the city’s forthcoming open data portal.

The teachers brainstormed ways that their students could complete community-based projects using the online tool, which will give free access to machine-readable data from the US. Census, budget materials, crime reports, and more.

“We would like you to think about how you can facilitate students’ work on these projects outside of the classroom,” Kumazawa said. “How can you use these assignments and assessments to make students more civically engaged?”

Kumazawa said Charlottesville’s advisory council for open data was guiding continued efforts to ensure no one could use the public datasets to obtain information about individual citizens.

“We need to make sure that the data is secure and confidential,” Kumazawa said. “There are a lot of things we need to be careful about.”

Chad Sansing of the Mozilla Foundation’s Open Leadership Team led a workshop that introduced participants to Mozilla’s educational web development platform, Thimble. He showed how students could use Thimble to “remix” websites with small edits to HTML, CSS, and JavaScript code.

“Kim Wilkens and St. Anne’s have been great partners for us,” Sansing said. “We are very interested in sharing Thimble with teachers so they can use it to promote web literacy.”

Susan Ramsey, STEM coordinator for Charlottesville City Schools, attended a workshop to learn how to use the Bootstrap web development framework to teach Algebra concepts.

“It’s a good opportunity for me to see what other educators are doing with computer science,” Ramsey said.

Ramsey said she would share what she learned with the six teachers leading the city schools’ Integrated STEM (iSTEM) initiative.