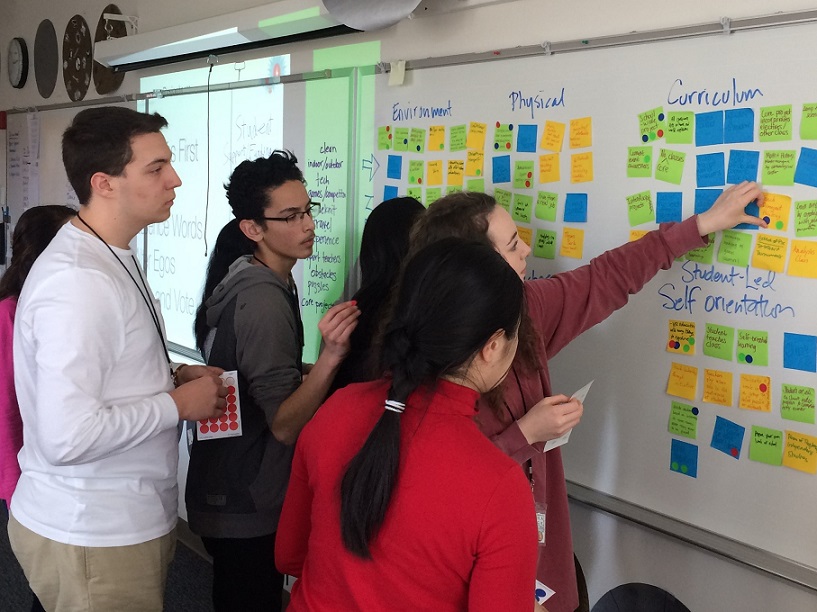 Students could chose from an array of workshops before starting their projects, including one on divergent thinking.

Fifty-five students from St. Anne’s and other Central Virginia schools participated in the two-day coding and design challenge, with 20 more students volunteering as mentors and event organizers.

“We wanted very much for this to be a community event, and this is clearly the case here,” said David S. Lourie, head of school at St. Anne’s.

The hackathon began Saturday morning with workshops led by professional mentors from local schools and technology companies. After the workshops, students sorted themselves into project teams that focused on one of four problem statements posed by sponsors of the hackathon.

ReinventED Lab, a local education nonprofit, called for projects that identified content, skills and mindsets that students should learn before they graduate high school, and found ways that they might be taught more effectively.

S&P Global asked students for ideas to address the underrepresentation of women and racial minorities in technology job fields.

The final problem statement, from WillowTree Inc., asked students to consider how technology could motivate people to transition to an environmentally sustainable lifestyle.

“The problem statements this year were harder than ever,” said Anika Volentine, a St. Anne’s-Belfield student on the hackathon’s organizing team. “Every group really rose to the challenge.”

Responding to the ReinventED Lab statement, a group of Albemarle High School students programmed a mock-up of an app called Adulting. The app would host instructional videos on how to change a tire, file taxes and other life skills.

“We polled our fellow hackathon participants, and found that many of them lacked these skills,” said AHS student Jade Burns.

AHS student Thor Page teamed up with Mariah Payne of St. Anne’s-Belfield to work on the S&P Global problem statement. They used the Scratch programming language to make a simple game, targeted at young girls, that teaches computer science concepts.

Page said girls tend to gravitate away from tech-centric hobbies in middle school, when the classes and activities they choose are influenced heavily by their peers.

“Girls in middle school become ‘socially barred’ from participating in computer science,” Page said. “This game, in its full fruition, would be something to circumvent that.”

“I want computer science to be experienced by everyone,” Page said. “More and more, it’s becoming a part of our daily lives.”

Gillian Chambers, a home-schooled student, said MissingLink would be programmed to recognize offensive language, and would send users messages asking them to consider changing the tone of a pending post that could be hurtful.

“If they have bad credit, MissingLink will block them from using certain words,” Cai said. “If they have terrible credit, it blocks them out of the network entirely.”

Cai said a guest at Sunday’s demo party offered some funding for her group to continue developing MissingLink.

Kim Wilkens, a computer science teacher at St. Anne’s-Belfield and a board member for Charlottesville Women in Tech, said she hopes some of the student groups will try to pitch their projects at the Tom Tom Founders Festival and pursue opportunities at UVa’s i.Lab incubator.

“We want these kids to continue what they started here, and keep pursuing their passions,” Wilkens said.