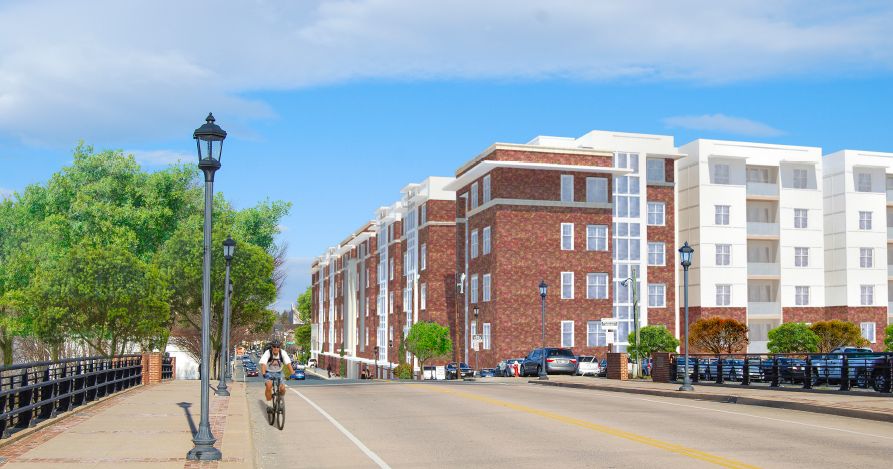 Rendering of Standard on West Main

Several members of the Charlottesville Planning Commission said Tuesday they leaned toward not approving an apartment complex on West Main Street unless the needs of an adjacent public housing site are taken into consideration.

“I have grave concerns about the social justice and the environmental justice issues of putting a project like this next to Westhaven,” said Commissioner Genevieve Keller.

The developers of the proposed 189-unit development, the Standard, had a preliminary discussion with the commission during its meeting Tuesday night. The developers need a special use permit to allow for additional density and building height.

The project is across the street from the 595-bedroom Flats at West Village, which is currently under construction. Both projects follow a rezoning last decade that encouraged residential density on West Main Street.

“The project we believe will be marketed to medical folks associated with the medical center,” said local architect John Matthews, who is working with Georgia-based Landmark Development on the project.

“West Main is the primary connecting link between downtown and the University and it has been identified as the zone for precisely this type of project and this scale of project,” he added.

However, some commissioners were concerned that both the Standard and the Flats at West Village are not in the city’s best interest.

“I’m not sure in our Comprehensive Plan and as we looked at the West Main corridor that our idea was two large monster [student housing] projects,” said Commissioner Lisa Green.  “I don’t think any of us in any meeting has said ‘let’s connect the University and downtown with student housing.’”

All commissioners expressed some concern about how the project would affect the 126-unit Westhaven complex operated by the Charlottesville Redevelopment and Housing Authority.

“This site and the adjacent site have been identified as potential areas where the Westhaven public housing project, if it were redeveloped, would be connected to West Main,” said city planner Brian Haluska.

The firm Wallace, Roberts and Todd produced a master plan for all of the CRHA sites that was adopted by the city in 2010, but redevelopment has not occurred.

Matthews said it was hard for the Standard to accommodate redevelopment when none of the scenarios in the master plan has been selected.

“If we knew what it was we were connecting to, we could connect to it,” Matthews said.

Matthews said he has met with CRHA residents on three occasions, and one of their concerns has been a lack of a pedestrian connection to West Main Street.

John Williams, a civil engineer with Landmark, said he could guarantee that would be part of the project.

“I don’t know you’re going to make a left hand turn there at 4 o’clock in the afternoon,” Santoski said.

Haluska said student buildings on 14th Street and Jefferson Park Avenue have not seen major traffic problems after they have been built.

“They’re not driving into campus because they can’t park,” Haluska said. “They walk.”

The Planning Commission is slated to vote on the special use permit later this year, but Keller said she wanted to wait until the results of a $350,000 study of infrastructure required to guide redevelopment of West Main Street. No timetable for that study has been made available.

Williams said he would like the property to be under construction next spring and that it will take up to 16 months to build.

In other news at the meeting, the developer seeking permission to build single-family homes on the new portion of Water Street deferred his application Tuesday after it appeared commissioners would not recommend approval. Collins Engineering is seeking to build 19 homes and a commercial building to the west of the City Walk project. Commissioners were concerned that there were not enough details about the project.

The commission also denied a request from a landowner who sought closure of a portion of Garrett Street. Homeowner Leah Watson wanted the street’s dead-end and a staircase to Ridge Street closed in order to dissuade vagrancy. Staff had recommended against the petition because a new staircase is being designed as part of the Strategic Area Investment area study.