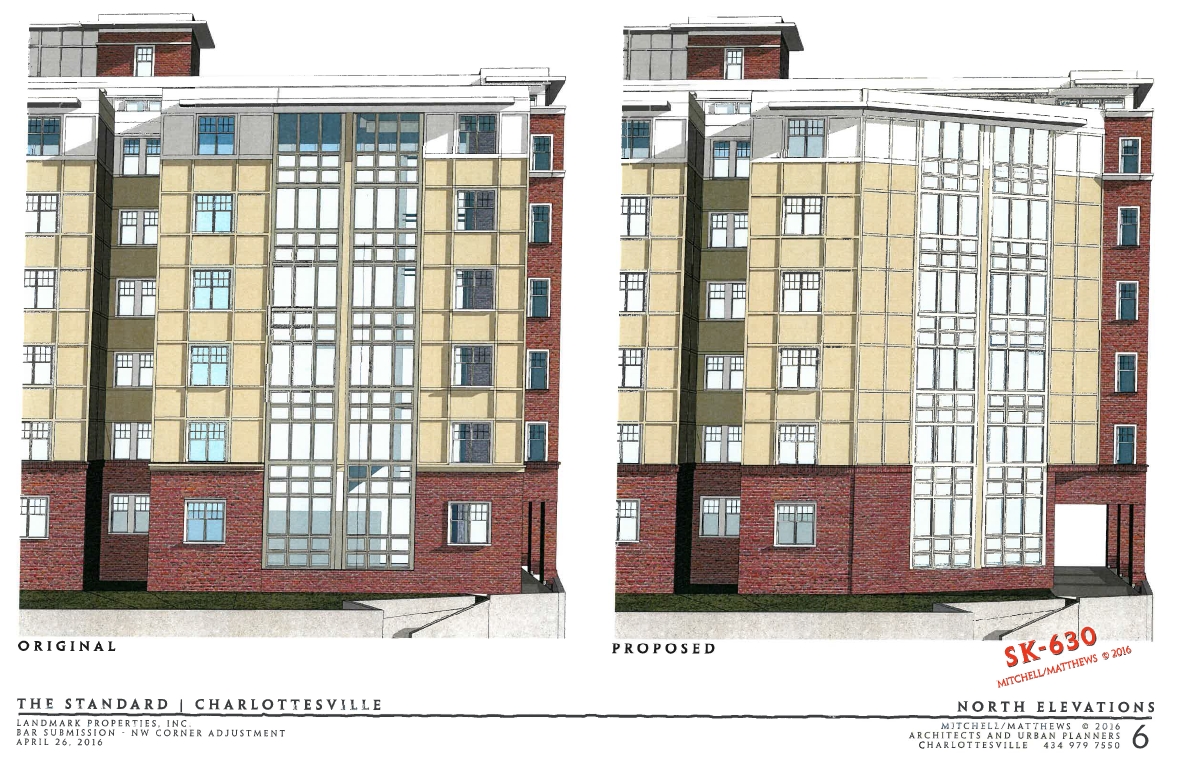 The proposed six-story Standard building on West Main Street returned to the Charlottesville Board of Architectural Review on Tuesday, more than three years after the panel first signed off on its design.

“The project is moving ahead,” said architect John Matthews. “We have a bunch of consultants working diligently to start construction in the fall.”

Georgia-based Landmark Properties had to amend the original certificate of appropriateness approved by the BAR in January 2014 because one of the building’s corners must be modified to meet federal regulations.

“A small portion of the rear, northwest corner of the building must be adjusted to comply with required [Occupational Safety and Health Administration] clearances to an existing power line,” reads the application for the amendment.

OSHA requires a 10-foot clear zone between a power line and any construction scaffolding. The original plan was that a utility line would be relocated, but the property owner has been unable to secure an easement.

“The proposal is to angle the building to accommodate the clear zone and the materials match what was originally approved,” said Mary Joy Scala, the city’s historic preservation planner.

The changes will reduce the building’s total footprint by about 2,000 square feet, according to Matthews.

The BAR approved a demolition permit to take down the existing three-story Republic Plaza in August 2013. That work has not yet occurred.

Republic Plaza was built in 1988 and incorporated a building that used to house a Safeway grocery store.

The Standard is planned as a six-story apartment building with 644 bedrooms. There will be 7,000 square feet of commercial space.

“We hope to be under construction by the end of the year,” said Blair Sweeney of Landmark Properties.

The project will be the third apartment building constructed in the immediate stretch of West Main Street.

The Flats at West Village opened its doors to its first tenants in August 2014 and has nearly 600 bedrooms.

The Uncommon at 1000 W. Main St. is currently under construction by the firm CA Student Living. That project had been approved at a total height of 101 feet, but the developers have built a slightly smaller building.

The developers of the 150-room Sycamore House Hotel at 1106 W. Main St. hope to break ground this summer.

The Standard is proceeding despite a large number of forthcoming housing units in the immediate area.

“We have paid attention to the market conditions, and we’re ready to move forward at this time,” said Sweeney. “There were a lot of moving parts on the project and we’ve just now got them put together.”

The developers will have to submit a final site plan in order to obtain a building permit. A preliminary site plan has already been approved.

“This is basically a project that was ready to go,” Scala said.

The amendment was approved unanimously by the BAR, with one BAR member absent.

“This seems entirely appropriate and I don’t have any concerns,” said BAR Chairwoman Melanie Miller.