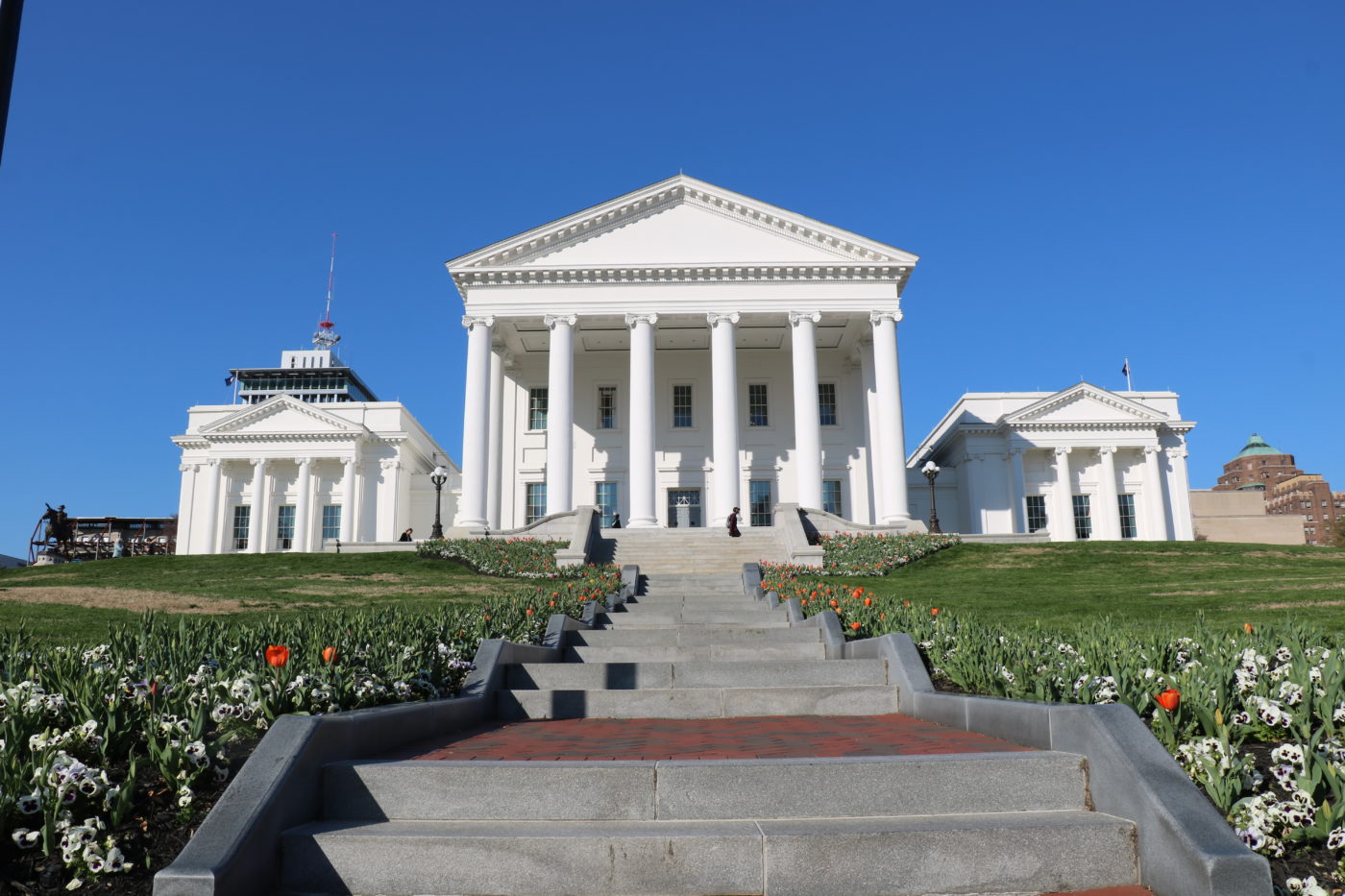 Virginia's General Assembly reconvened for a special session Wednesday, where gubernatorial amendments to the budget bill were adopted or rejected.

RICHMOND — During the reconvened General Assembly session, state legislators voted Wednesday to eliminate driver’s license suspension fees for people who lost their licenses due to unpaid court fees or fines.

More than 600,000 Virginians have been affected by the law, which can have a disproportionate effect on lower income Virginians for whom public transportation may be sparse or inconvenient and the ability to drive is a necessity for them to get to work.

“When a person’s driver’s license is suspended, they may face the difficult dilemma: obey the suspension and lose the potential to provide for their families, or drive anyways and face further punishment or even imprisonment,” Del. Alfonso Lopez, D-Arlington, said ahead of the amendment’s adoption by the House.

Lopez called the existing law a “debtor’s prison,” and added “we should never be punishing people for being poor.

The measure previously had been introduced by Sen. Bill Stanley, R-Franklin, during the regular session. While it had garnered bipartisan support in the Senate, it was never heard by the full House of Delegates. Northam, Stanley and other supporters gathered in Charlottesville last week at the Legal Aid Justice Center to announce that the governor was adding the topic as one of his 40 amendment suggestions to the House budget bill.

The Legal Aid Justice Center also had challenged the prior law in federal court and involved Charlottesville residents who have been affected by the law.

“We are so grateful to Sen. Bill Stanley, the members of the Virginia Legislative Black Caucus, Governor Northam and his administration and all the policymakers who shepherded this effort to success,” the center said in a press release this week. “We are also thankful for our many partners in advocacy who fought with us for this common-sense reform.”

Ahead of the amendment adoption, residents had to pay a $145 reinstatement fee, and the money went to the Department of Motor Vehicles and the Trauma Center Fund. The 2019 session budget included $9 million to cover lost revenue from fees, which allowed for this budget amendment.

Amendment 33, which eliminates the reinstatement fees, passed the House (Y-70, N-29) before passing the Senate later in the evening. The amendment gained bipartisan support but was not without opposition.

Del. Rob Bell, R-Albemarle, was not in favor of adopting the amendment, citing measures already in place to avoid a license suspension, such as a 30-day payment window for fines, the ability for an extension, payment plans and possible community service options. He worried those who lost their license due to reckless driving would not be adequately held accountable without the fees.

“So to be clear, if you vote for this, what you’re saying is that ‘even if you don’t follow the law, even if you don’t pay the fine, even if you don’t sign up for an extended license, even if you don’t get a community service, we will not take your license away,’” Bell said to his colleagues ahead of the vote. “I suspect that in four or five years, if this passes, there will be a law. The law will be because in one of our districts, somebody will have caused accident and killed somebody who is a child. They’ll look at that person’s record and they will say ‘this person had nine unpaid tickets and never was penalized for his driving, and now he’s killed somebody. I cannot believe that in Virginia you can do that.’ This is the day we’re going to say you can do that.”

The language in the adopted amendment referred to individuals who “only failed to pay fines, court costs, forfeitures, restitution or penalties assessed against them.”

While those in favor of the amendment skewed more towards the Democrat legislators, Republican Del. Nick Freitas, R-Culpeper, spoke in favor of it, as well.

“Well, this is going to be a little awkward, I’m going to be supporting the Governor’s amendment,” he said to a surprised audience. “I do think that there are a number of ways that we can ensure that people pay fines. To take somebody that is having difficulty paying a fine, and then take away their means to get to a job or get their kids to school, I don’t think is an appropriate mechanism in order to enforce these fines.”

Meanwhile, residents affected by the previous policies have spoken in support of the changes. 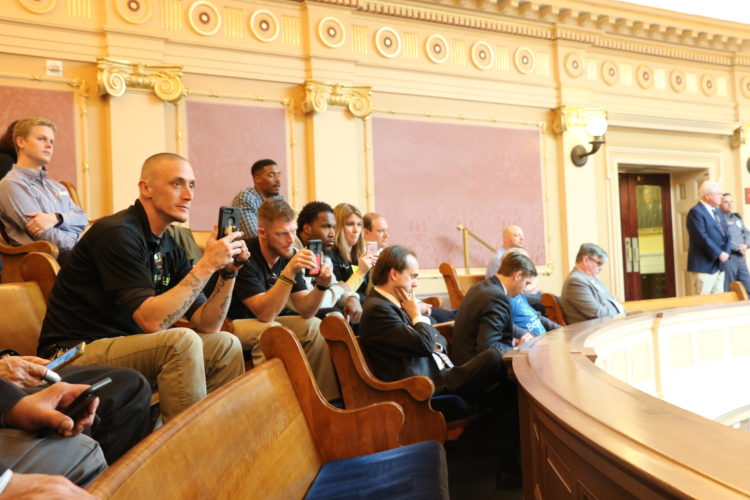 Members of the audience associated with Virginians Organized for Interfaith Community Engagement watch the proceedings from galley in the House chamber.

Marcel Quinn, who attended the session with Virginians Organized for Interfaith Community Engagement, has been negatively affected by a driver’s license suspension. He was unable to pay a court fee and struggled to keep up with a repayment plan. Once he lost his license, he says he spent nearly four hours a day taking trains and buses before a friend was able to drive him. This made getting to work and spending time with his son more challenging.

“This is a really unfair predicament and I’m trying to get out of it,” Quinn said. “It is hindering my success.” 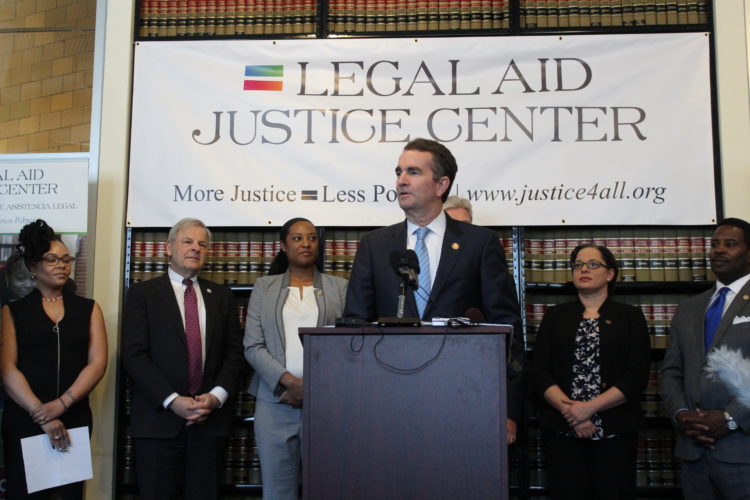 Briana Morgan, a Petersburg resident and plaintiff in Legal Aid’s lawsuit, was present at last week’s event at last week’s event in Charlottesville. Several years ago, she had a minor traffic infraction that came during a high-risk pregnancy and a time where she was living with family and facing financial issues. She could not afford the court fee and had her license suspended.

The suspension increased her travel times for various medical appointments for both herself, and her father, a stroke survivor. Morgan eventually had her license reinstated last year.

“I’m pleased to see Virginians working together to end this wrong,” Morgan said as she addressed the crowd at Legal Aid.

Adrainne Johnson, a Charlottesville resident and plaintiff on the Legal Aid case, got her license back in January through an injunction. She is also pleased at the passing of the amendment.

“Having my license back after so many years has been such a blessing. It doesn’t take me hours to get to and from work and I’m now eligible for a promotion,” Johnson said. “I’m excited to see what a difference this makes in the lives of so many people I know.”