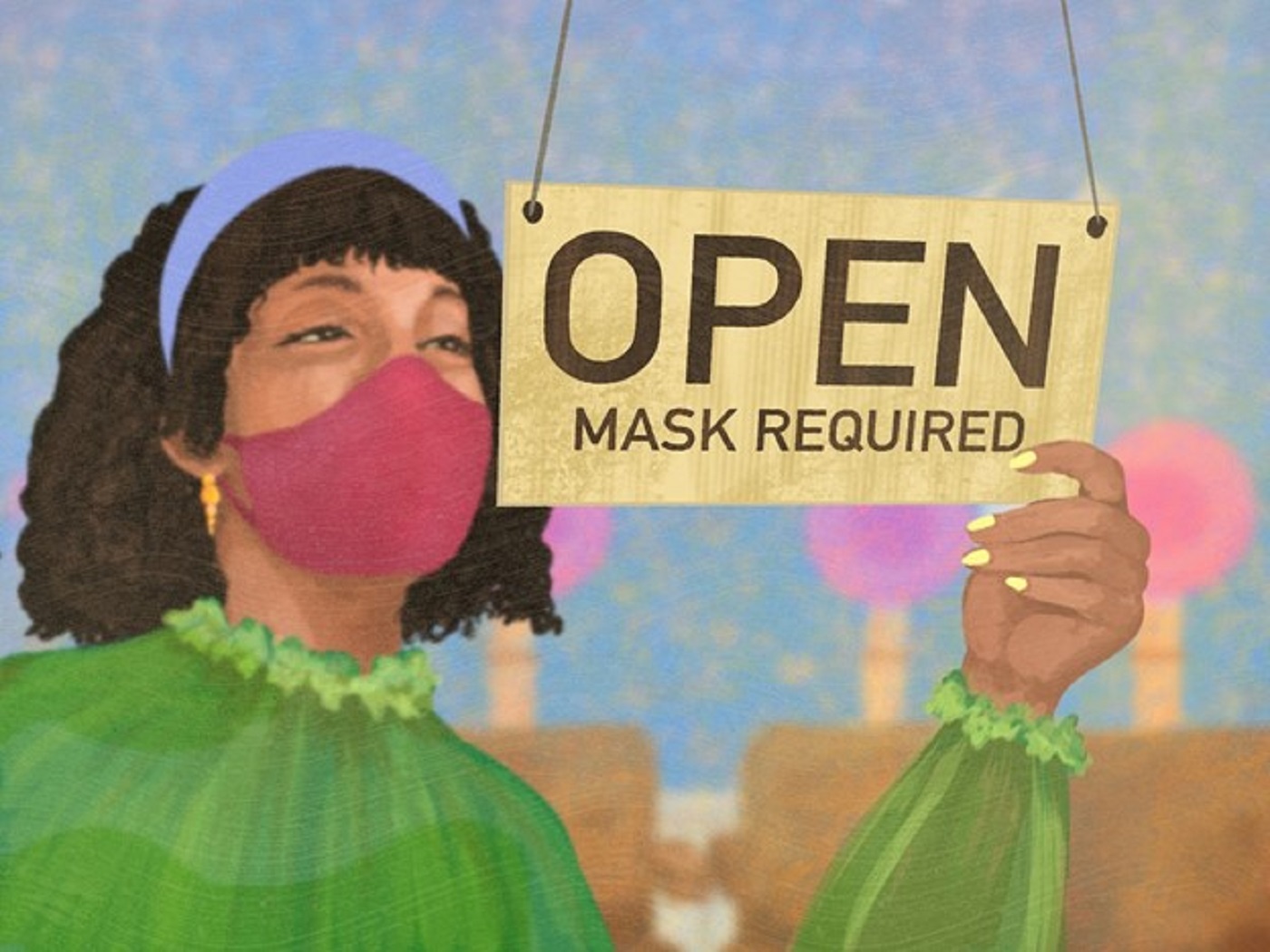 A year into the COVID-19 crisis, the city of Charlottesville helps local minority owned businesses fight back from the brink, and assists community members in regaining employment

This series uses the Social Determinants of Health as a foundational framework and guideposts to bring you stories of how the COVID-19 crisis has impacted some of our African American communities.

ABOUT THE ARTIST - SAHARA CLEMONS

About the Artist: Sahara Clemons

Starting this week, the city of Charlottesville’s Office of Economic Development will disburse $40,000 in grants to local small businesses, all of which are owned by people of color or women. The mini-grant program, facilitated through the city’s Business Equity Fund, is the latest effort specifically designed to aid area business owners and employees recovering from the coronavirus pandemic’s economic impact.

By the executive order of Gov. Ralph Northam, most nonessential businesses closed to the public to stem the spread of the virus. This order – which also closed public schools and banned public gatherings of more than 10 people – effectively gutted many small businesses statewide, including Black-, Hispanic- and Asian-owned businesses in Charlottesville and the surrounding counties. A December 2020 meeting of Virginia’s Small Business Commission revealed that 27% of small businesses in the commonwealth closed either temporarily or permanently during the pandemic, with more than 40% of those businesses in the hospitality and leisure industries.

“A lot of our minority-owned businesses were greatly impacted [by the coronavirus pandemic],” said Hollie Lee, chief of workforce development strategies for the city of Charlottesville’s Office of Economic Development and Downtown Job Center. “That includes barber shops, beauty shops, nail salons and other personal care businesses, as well as food service businesses.”

Now, with the number of Virginians who have received a complete coronavirus vaccination steadily rising, some of these businesses are re-opening their brick-and-mortar home base or pivoting to offer their services virtually. 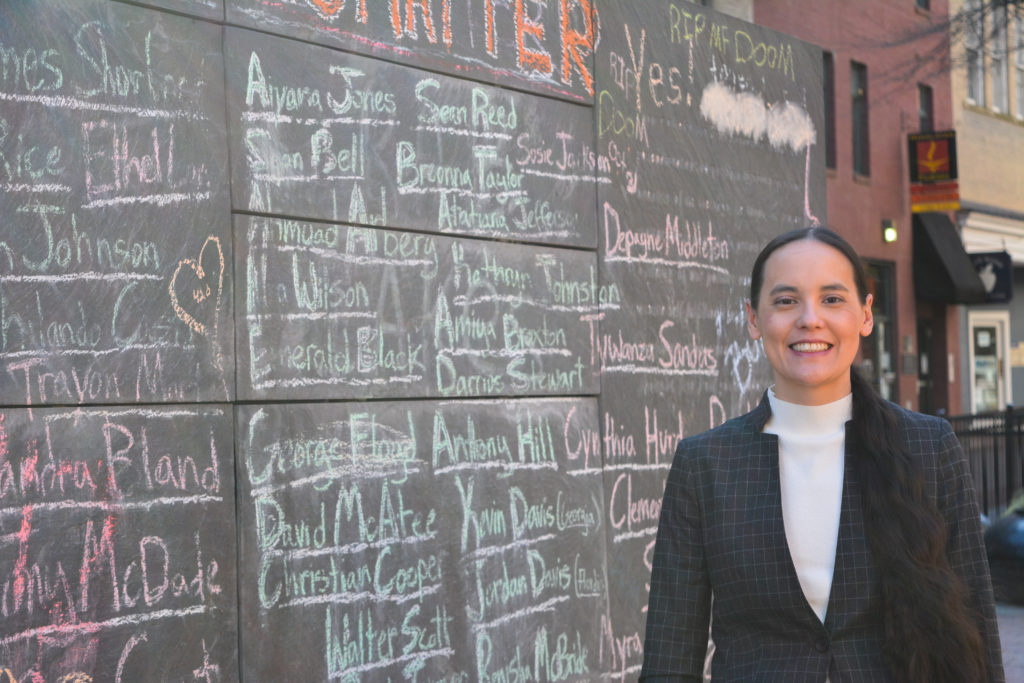 Hollie Lee, chief of workforce development strategies for the city of Charlottesville's Office of Economic Development and Downtown Job Center.

“We are starting to see businesses coming back to life,” Lee said. In the early days of the pandemic and in its continuation throughout 2020, Lee said her office focused on helping businesses stay afloat. To date, the agency reports it has disbursed more than “$2,000,000 in grants, loans and other supports” to city businesses since March 2020. That figure, said Lee, includes the first round of small business relief grants held last July, resulting in 129 awards to small businesses; 50% of these awardees qualified as “socially disadvantaged,” either by race, ethnicity or gender.

As the pandemic continued, the agency focused especially on helping businesses owned by minority members of the Charlottesville community, usually identified as Black, Latino, Asian, Indigenous and mixed-race people. The numbers from subsequent grant disbursements reflect the success of this effort. In the second round of small business grants, 74 awards were disbursed to local businesses and 61% of those were businesses owned by a member of a minority community, a woman or both. Mini-grants of $2,500 each are rolling out to businesses this week; 100% of them are owned by socially disadvantaged groups, with Black business owners comprising 75% of grantees.

While COVID-19 fomented a 22% drop in the number of small-business owners total nationwide, Black-owned businesses – in Charlottesville, the surrounding region, the state and across the country – were disproportionately impacted by the pandemic. The Federal Reserve Bank of New York reported that 41% of Black small businesses nationwide were forced to shut down as a result of the pandemic. Latino-owned businesses dropped by 32%, and Asian-owned establishments suffered a 26% decline. Conversely, “the number of white business owners fell by 17%,” the report found.  Along with providing vital capital to keep businesses’ doors open and operations running smoothly, the OED grants equip grantees with business growth strategy training (via webinar), and one-on-one coaching sessions with a business consultant.

In addition to helping business owners, Lee said her office’s work through the Downtown Jobs Center has shifted to assist individual community members find their way back to gainful employment.

Prior to the pandemic, Lee said, the city’s unemployment rate was relatively low, hovering around 2.7% in January 2020, according to the U.S. Bureau of Labor Statistics data. As the pandemic bloomed, however, “we had many individuals who reached out saying they had lost employment, in the hospitality and food service industries especially,” Lee said. “So we had employers who no longer had open positions because they had to cut back their hours severely or close down altogether, and employees who lost their jobs. It was a spiral effect … [and] now things are still a challenge.”

A number of these employees were people of color, another marker of the disproportionate impact the coronavirus continues to levy onto minority communities in addition to the public health risks it imposes. The most recently-available data shows that the 2020 unemployment rates in the Charlottesville region peaked in April at 9.5% but gradually lessened as the year came to a close, with a 4% rate in December. Lee, an Augusta County native whose parents owned a variety of businesses throughout her life, said she was born with “an entrepreneurial spirit.” Her background enables her to relate deeply to local business owners and workers, whom her office will continue to help mitigate the financial fallout of COVID-19.

While many local industries suffered during the thick of the pandemic, construction was not as hard hit, said Lee.

“We did a trade builders training academy during the pandemic, because a lot of construction companies needed trained workers for a variety of projects.” she said. “Locally, we didn’t see the construction industry really grind to a halt, like we did after the 2008 recession, for example.”

Quinton Harrell agrees, and said there is renewed opportunity for Black subcontractors and laborers in the region. Harrell chairs the Minority Business Alliance — a group convened by the Charlottesville Regional Chamber of Commerce to support, connect and elevate minority-owned businesses — and is the founder of Heritage United Builders (HUB Cville). Harrell said the impetus of his company’s existence was a conversation with Charlottesville City Council members and other leaders about the city’s track record of excluding Black builders and companies from city-backed general contracting projects.

“I learned that in that 2017 budget, the [city’s] budgetary spend for local vendors was around $53 million; of that 53 million, 0.04% was African American vendors. So that was a startling number, and I wanted to help correct that,” said Harrell. 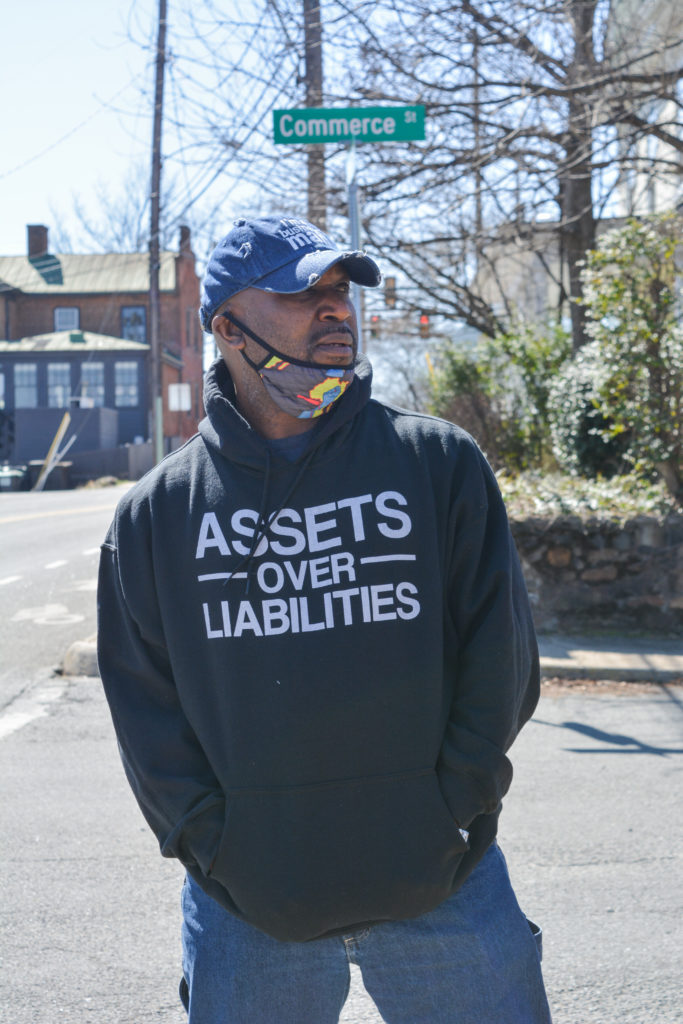 So far, Harrell has connected about eight Black subcontractors to local projects and anticipates assisting others in the future. The national tumult following the death of George Floyd spotlighted a plethora of America’s racial inequities last year; the pandemic, Harrell said, only exacerbated existing problems stemming from the structural racism woven into practically every thread of the nation’s socioeconomic tapestry. With the renewed interest in racial and social justice came more opportunities for Black businesses, said Harrell, who points to President Joe Biden’s $400 billion campaign commitment to aid small businesses in recovery from the coronavirus with specific measures to “tackle inequities in the federal contracting system.”

Locally, groups including the Minority Business Alliance, the OED’s Minority Business Program, the Central Virginia Small Business Development Center (where, Harrell mentions, his wife Yolunda Harrell works part-time) continue collaboration with local and state government agencies, as well as private sector companies to boost Black and minority business representation in all industries and increase the number of certified small, women-owned and minority-owned (SWaM) businesses. In the meantime, Harrell advises Black business owners to learn from the economic burn of the COVID-19 pandemic and use that hard-earned knowledge to build up their businesses.

“I owned a retail clothing store years ago, and I wasn’t managing revenues responsibly. I was going through the motions of bookkeeping, but I wasn’t using that financial knowledge to make business decisions. So when the economic [recession] came in 2008, I lost … almost everything. But it taught me to stay as educated as I could on my business strategy and best practices, and to always be thinking long-range. I’m of the mindset that we can’t let a crisis go to waste.”

Anyone interested in shaping the continued revitalization of the Charlottesville region’s economic landscape may share their input with the Office of Economic Development this month.

Meetings to discuss the agency’s “Recovery Roadmap: A Plan for Business Recovery in Charlottesville” campaign will be held via Zoom virtual conference at 8:30 a.m. March 17 and at 4 p.m. March 18.  Registration information and more details may be found here. 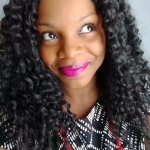 Written by:
Samantha Willis
Samantha Willis is freelance journalist with experience in broadcast, digital and print media. She is a native of Hanover County and lives in Ashland with her husband and sons.