Stonefield design lands between a rock and a hard place

didn’t get much time to relish last month’s approval of the design for a new Regal Cinema. The proposed Trader Joe’s grocery store, and every other building under review by the Albemarle County

Board members warned that the big box cinema, which they justified as a use requiring a big box without windows, should not be seen as a precedent for other commercial buildings.

Stonefield, formerly known as Albemarle Place, is a mixed-use development that encompasses an area twice as large as the blocks surrounding Charlottesville’s Downtown Mall. Stonefield will include apartments, a hotel, restaurants and a variety of retail businesses.

“This is kind of like the process of eating an elephant,” said board chair

as he opened the design review of the project’s next eight commercial buildings.

At the heart of the challenge is designing buildings that face two “main streets” — Stonefield’s internal roads where new businesses will have their main entrances and the county’s Hydraulic Road and U.S. 29, which are designated “entrance corridors.” 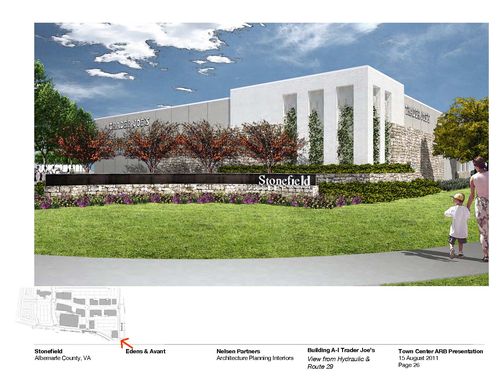 “I’ve said this from the very beginning, and I don’t think I have been heard up until now, that there is no context for the current drawings that I have seen,” said board member Paul Wright. “If you use the cinema as your template for the rest of the design, you will not be successful. For the Trader Joe’s building, I can see almost nothing except the use of stone that is appropriate for this corner.”

Trader Joe’s is proposed for the corner of Hydraulic and U.S. 29 at the site of a former 7-Eleven. Wright and other board members all agreed that blank walls and loading docks facing U.S. 29 were unacceptable.

“It’s not to say that we don’t like modern buildings, look at the [new] Martha Jefferson Hospital,” added Wright. “We have approved modern buildings that are quite architecturally significant and fit into the entrance corridor.”

, acknowledged the sides and backs of numerous Stonefield buildings would face the entrance corridor while the shops and activity will be anchored on new streets inside the development.

“We are going to have to work through it,” said Gallagher. “There are a lot of tools we can use — landscaping, architectural design (even when it’s on the back of the buildings), things you can do to create changes, verticality, and hierarchy, but it is an inherent conflict.”

Board member Wright did some research of his own and shared a picture of another Edens & Avant project called the Shoppes at Ryan Park in Ashburn which he indicated he preferred.

“I looked at this and said ‘Why not us?’” stated Wright.

That commercial complex, however, has the typical frontage of a large parking lot, not the relegated parking and pedestrian-oriented spaces like the Downtown Mall that have long been a goal of Albemarle’s neighborhood model in general, and Stonefield specifically. 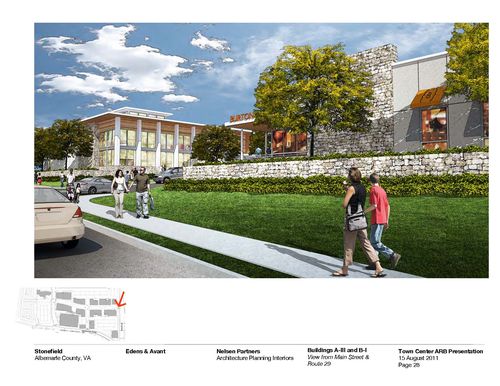 “Next time I come down I can bring a picture of the back of the building,” said Gallagher about the Ashburn example. “It’s more of a sheer wall.”

Wright also highlighted the Harris Teeter in Crozet as an example of where the ARB pushed back and the design was adjusted.

“We were told we were going to have a blank wall, and we said no,” said Wright.  “There are now windows all along the Harris Teeter in Crozet…I have been to about five Trader Joe’s and there aren’t any two of them that are exactly the same.”

“We are here to listen and understand,” Gallagher told the ARB.

Edens & Avant will return to the ARB on September 6 to finalize the Regal Cinema’s landscaping and lighting plans, as well as to hold a work session on Trader Joe’s and other nearby commercial buildings proposed along U.S. 29.