Architects for Edens & Avant are being challenged by the ARB to present an atypical design for a theater and nearby grocery store that will occupy prominent locations along Hydraulic Road and its intersection with U.S. 29. 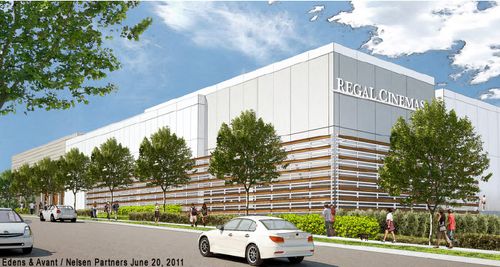 “This would be perfectly fine down at Short Pump,” said board member Bruce Wardell. “But Short Pump’s out in this contemporary, entirely newly constructed environment.”

“I think if we approve a building with this much stucco in it, we’ll never be able to say no to anybody else with anything this size ever again,” said board member Paul Wright. “Either we’re making an enormous change in our design criteria here or we’re not.”

, a state-of-the-art 14-screen theater with IMAX, and a Trader Joe’s grocery store are the first buildings of many that will undergo review by the ARB.

Stonefield, formerly known as Albemarle Place, is a mixed-use development that encompasses an area twice as large as the blocks surrounding Charlottesville’s Downtown Mall. Stonefield will include apartments, a hotel, restaurants and a variety of retail businesses.

Originally approved in 2003, the project was delayed for a number of years, awaiting a more favorable market and necessary upgrades to the Meadow Creek sewer interceptor. There was also a change in ownership, with Edens & Avant acquiring the property in August 2007. The official groundbreaking was held earlier this month.

During work sessions this month, the ARB has not been completely satisfied with adjustments made in building materials, color choices and respect for existing architecture in the area.

“I think of these changes as minimal,” Wright said. “I’m getting the same sort of blank white building. I’m getting a building that doesn’t respond to local architecture, and you’re tinkering on the edges.”

Wright, along with other board members, has continued to take issue with the dominant use of stucco along the theater’s exterior. At 320 feet long and more than 40 feet in height, a large part of the ARB’s concern stems from the fact that most of the theater’s façade sits along the edge of Hydraulic Road, a designated entrance corridor.

Some ARB members want a style more like the brick-heavy look approved for the previous owners. When Wright suggested the current plans were based more on cost effectiveness than aesthetics, project developer Bill Caldwell agreed that was a factor.

“This absolutely is cost driven, no doubt,” Caldwell said. “There is a reason the previous design wasn’t built. I mean our site costs here are significant, they’re significantly more than most other developments in this region.”

Board member Fred Missel said he thought the plans were progressing, but that the ARB should be consistent with past decisions.

“We’re going to be consistent to the past,” Missel said. “We have to be fair to the folks that have become before us. At some point we’re just going to have to come together and have a compromise.” 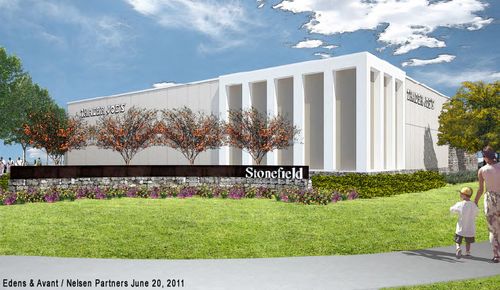 The Trader Joe’s, which will anchor the corner of the development at the location of the former 7-Eleven, faces similar design challenges, particularly as the back of the building is what is proposed to face Hydraulic and U.S. 29.

The ARB members asked the architect to consider alternative materials for the Trader Joe’s and said they looked forward to what officials would bring back in July.

“It’s obvious we want you to be successful,” Missel said.

Representatives for Stonefield are scheduled to return to the ARB with revised plans on July 5. If approved, construction could begin as early as October. 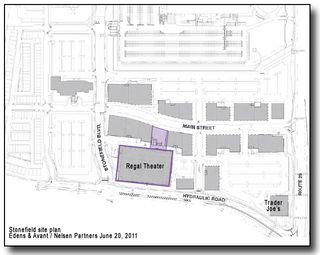