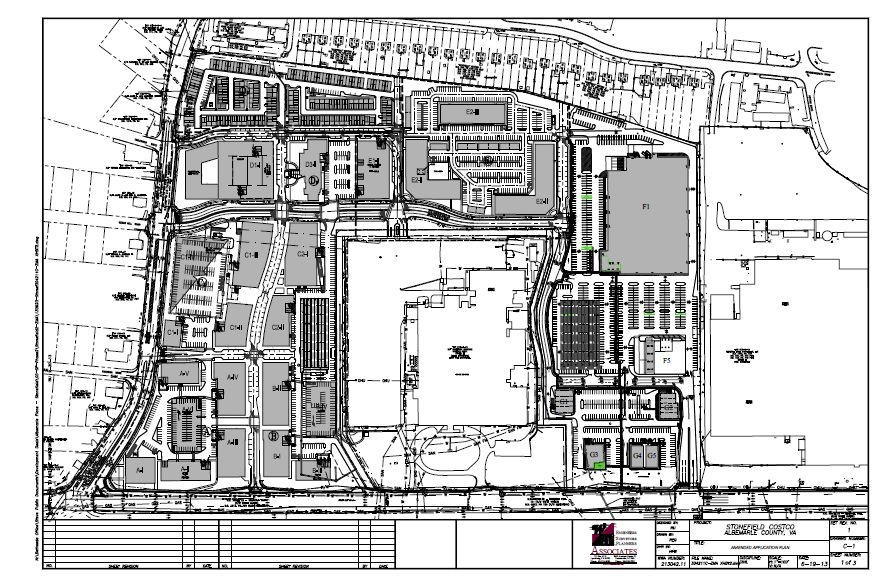 The Albemarle County Planning Commission has recommended approval of a rezoning that will allow Costco to operate a gas station at its proposed store at the Shops at Stonefield.

“This will be an ancillary fuel station tied to the retailer that will be limited to their membership,” said Brad Dumont, vice president of development for Edens, the developer of Stonefield.

The review is required because gas stations were not allowed under the 2003 plan for Stonefield when the project was known as Albemarle Place.

“This rezoning request will not significantly change the site layout or intent of the original rezoning,” said Albemarle planner Sarah Baldwin.

The 155,000-square-foot Costco building will be part of the second phase of Stonefield, and will be constructed to the north of the Sperry Marine facility.

In September, the Board of Supervisors voted 4-2 to allow a variation from the “code of development” that allowed for that size building. Opponents of the project unsuccessfully argued that decision should have gone through the formal rezoning process because the Places29 Master Plan called for smaller buildings.

The commission’s vote to recommend approval of the fuel station was unanimous, but one member had a question about the large mound of dirt and stormwater pond that is currently on site.

“How do we go from the detention basins that we have now to the developable lands that I see here in the plan?” Commissioner Bruce Dotson asked.

Dumont said the detention basins would eventually be placed underground as part of the site’s stormwater management system. That will occur when the second phase gets under construction.

A consortium of developers across U.S. 29 from Stonefield has filed suit against Edens, alleging that the stormwater system is unlawful because they claim it will flood their properties. A hearing on that matter is scheduled for Oct. 28 in Albemarle Circuit Court.

The Board of Supervisors will consider the Costco rezoning on Nov. 13.