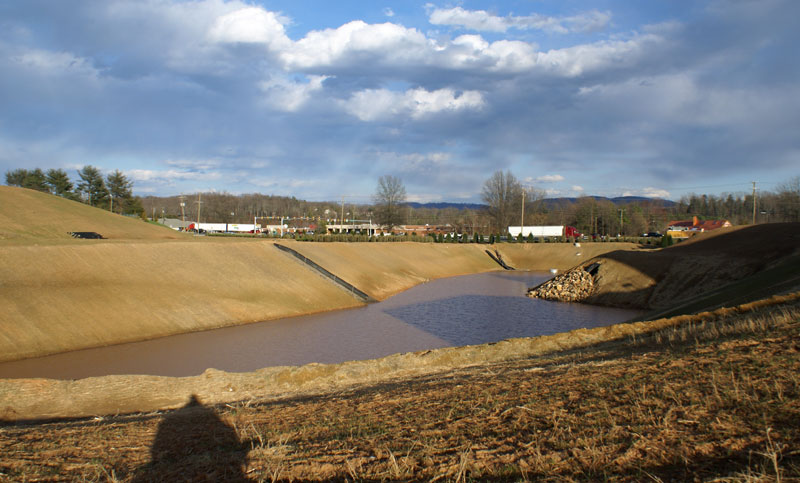 The developer of the Shops at Stonefield may proceed with a second phase of development now that a legal dispute between Edens and the city of Charlottesville has been settled.

City Council voted 3-0 Monday to direct the city attorney to file a consent order with the Charlottesville Circuit Court to finalize the settlement. Two councilors were not present at the meeting.
Stonefield is in Albemarle County, but stormwater from the 65-acre property flows into the city, which triggered Charlottesville’s regulatory authority.
Last June, the city issued a citation against Edens claiming it had not met the terms of land disturbance permit issued in early 2012.
Edens had appealed the citation to City Council.
“That was subsequently affirmed by this council and the Stonefield developer appealed that to circuit court,” said City Attorney Craig Brown. “For the past several months, we have been involved in mediation.”
Brown said he couldn’t discuss what happened in mediation, but he and Jim Tolbert, the head of the city’s department of neighborhood development services, both recommended that council authorize the consent order.
Before construction began on Stonefield, an unnamed tributary of Meadow Creek flowed underneath U.S. 29 through a 42-inch pipe into a natural drainage channel between the U.S. Post Office and a restaurant on property owned by  Great Eastern Management Company.
As part of their stormwater management plan, Edens placed a 72-inch pipe next to the original to handle stormwater that generated by the new parking lots and rooftops.
Great Eastern representatives argued last summer that the situation would cause flooding at Seminole Square Shopping Center and would threaten the construction of Hillsdale Drive Extended.
At the time, the city agreed and claimed the pipe was not to be opened until riprap – rocks that slow down the speed of stormwater – had been placed in the drainage channel.
Edens representatives claimed that Great Eastern had not allowed access to its property to do so.  The city initially disagreed, but changed its stance following mediation.
“We believe [Edens] has made a reasonable effort to gain access to that property but have been unsuccessful,” Brown said.
As part of the permit, Edens posted a $150,000 bond to cover the costs of any damage may occur in the next five years.
Additionally, the city now believes Stonefield presents no downstream threat.
“We are of the opinion that the risk of any future erosion resulting from the lack of that riprap is very unlikely,” Brown said. “The absence of that riprap does not increase the risk of flooding downstream.”
In April, the city planning commission will discuss a critical slopes waiver necessary for the expansion of the Seminole Shopping Center and the Pepsi-Cola bottling facility.
Great Eastern representatives declined to comment for this story. Edens representatives did not respond to a request for comment before press time.
Stonefield opened last November and several stores, restaurants and a new Regal theater are now open. A Hyatt hotel is under construction, as is a block of apartments.
The consent order reports that Edens has already developed 36 acres of the site, with another 29 acres under construction to the north of the Sperry Marine facility.
The opening of the 72-inch pipe means that a large stormwater retention pond can be filled to allow for the completion of the second phase of construction the project.