Stormwater inspections and costs to increase for Albemarle developers 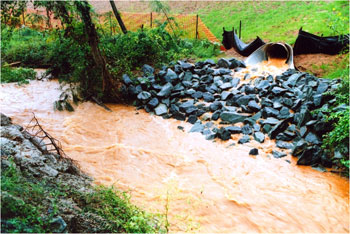 In addition to the potential of a utility fee to help improve its network of stormwater pipes, Albemarle must tell the State Water Control Board how it will increase inspections of construction sites by Dec. 15. The draft program will include proposed mechanisms for how to raise revenues to pay for additional inspections.

The new hires would cost $182,000 in the first year, but Graham said that the county could likely receive around $132,000 in fees to offset the expense based on the current draft ordinance.

“This is about us overseeing permits and managing a permit program that has been delegated to us by the state,” Graham said.

The current county soil and erosion ordinance is triggered for developments larger than an acre. Under the new rules, permits will be required for anything over 10,000 square feet, less than a quarter acre.

A permit to discharge stormwater from a construction site now costs about $1,500 but would increase to $4,500, according to the draft. The Virginia Department of Environmental Quality would take 28 percent of that amount.

However, the new rules will allow the county to charge more for larger developments, which require additional inspections.

“The cost for large projects and medium-sized projects are really the same under the current ordinance,” Graham said. “The permit [fee] would be based on the size of the project because there are so many new elements to the inspections beyond what we are performing.”

The proposed fees have not yet been finalized, but Graham said that they will be designed to recover 50 percent of the county’s costs.

“The reason we have gone with 50 percent coverage in the [current] fees was because we said the entire community benefits from good development,” Boyd said. “[But] this is a new mandate from the state. I don’t know that I would be opposed to saying we’d charge [developers] the full fee for 100 percent of the cost.”

Graham suggested setting the fee at that amount in the draft ordinance and scaling it back if there is opposition from the development community.

Several developments that have been approved but not yet constructed, such as North Pointe near Hollymead Town Center, would be grandfathered. That means they would be exempt from the program unless they do not develop before July 2019, Graham said.

Boyd asked Graham if he would send a notice to builders who have undeveloped property.

“They might not realize … that this is pending,” Boyd said.

Graham said the county will hold a roundtable this fall to get input from developers before the draft ordinance is sent to the state.

An official public hearing and adoption would be held sometime early next year.

These are not the only stormwater regulations what will affect the county. The county’s municipal stormwater permit will also be subjected to higher standards, which will require more inspection as well as rehabilitation and replacement of stormwater pipes.

Charlottesville opted earlier this year to levy a utility fee on property owners to pay for an expanded stormwater management system. That option is still on the table for Albemarle County.