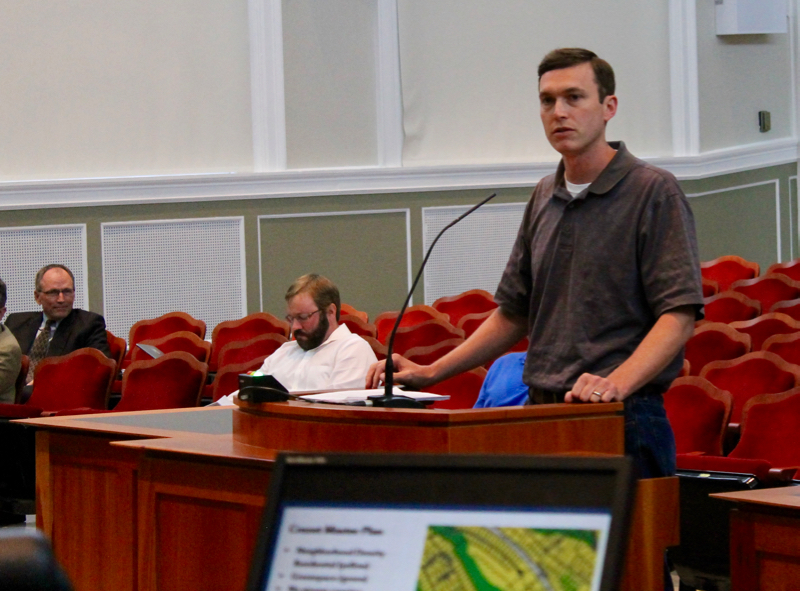 A future subdivision in Crozet is one step closer to being built after the Albemarle County Planning Commission recommended approval of a special-use permit for a stream crossing at its meeting Tuesday.

“This is a close call, a judgment call,” Commissioner Bruce Dotson said.

West Glen — a proposed development between the Crozet Crossing and Orchard Acres neighborhoods — sits on R6 residential zoning but cannot be built until a second access road connects to Cling Lane.

When Crozet Crossing was constructed in the early 1990s, the Board of Supervisors approved a special-use permit to allow the construction of a crossing of Powell’s Creek on Cling Lane with a condition that restricted any development beyond 30 units until a second access road could be built connecting to Orchard Drive.

In order to build the West Glen development, the developer — the Southern Development Group — needs a special-use permit to cross Powell’s Creek and extend Cling Lane to Orchard Drive.

Without the crossing, the only other option for the developer is to build a connection to Blue Ridge Avenue, and Southern Development has been unable to secure a right-of-way across adjacent properties.

By a 3-to-1 vote, the commission recommended the Board of Supervisors approve the special-use permit. Commissioner Mac Lafferty voted against approval, and Commissioners Karen Firehock and Timothy Keller were not present at the meeting.

Commissioner Jennie More recused herself from the commission’s vote and discussion because her property may be impacted by the West Glen development.

According to a concept plan, the developer hopes to construct a mix of 81 single-family attached and single-family detached units on approximately 19 acres north of Powell’s Creek. The developer also plans to leave a greenway south of the creek, which will include a dedicated area to the county for a trail.

County staff recommended approval of the special-use permit with several conditions, including a requirement that most residential lots be located outside of the 100-foot stream buffer, floodplain and critical slopes, although the proposed Cling Lane Extended and its crossing would be the main exception to this condition.

Staff also suggested a condition limiting the net density of the property to six units per acre and noted the calculation of net density — or units per acre of buildable land — would not include land in the floodplain, stream buffer or area designated as critical slopes.

Charlie Armstrong, vice president of development for Southern Development, asked for a removal of these two conditions, saying the limit on where lots and streets can be located may lead to more impervious areas and noted that the development is located within a designated growth area.

“It would be better to have the density here than to have fewer units, which means, eventually, someone needs to build more units elsewhere to accommodate the same amount of growth,” Armstrong said.

Armstrong also said the density restriction would reduce the number of proposed units from 81 to 74. This would have a density of around four units per acre.

Four Crozet residents spoke during the public comment period — all were opposed to the special-use permit.

Cling Lane resident Robin Luecke read the comments of the Crozet Community Advisory Council, which previously approved a resolution in opposition to the permit due to concerns about a crossing’s potential environmental impacts.

The CCAC also said the proposed West Glen development is not in keeping with Crozet Master Plan’s desire for developments to match the character of surrounding neighborhoods due to the higher density.

Former CCAC member Kim Connolly said the development would damage the environment and bring a lot of growth to a small area.

“If you look at this piece of property and the adjoining property that is going to be developed by-right — which is The Vue — you’ve got this little wedge of Crozet that is going to have a tremendous number of units,” Connolly said.

The Vue, a 126-unit by-right apartment development on a 21-acre parcel off Blue Ridge Avenue, received administrative approval from the county in April.

Armstrong noted some of the mitigation measures being proposed and said removing a small dam on the property and restoring the stream would be a major benefit to the riparian environment.

Armstrong also cited a letter from the U.S. Army Corps of Engineers in April endorsing the removal of the dam.

Dotson asked if Armstrong had any concern about silt behind the dam that could potentially contain pesticides from prior orchard uses on the land.

“Will there be any consideration of affordable housing,” Commissioner Daphne Spain asked.

“Our partnership agreement with the landowner is that we provide 15 percent affordable housing as part of our development,” Armstrong said. “That’s the deal, that’s what they wanted and that’s what we’ll do.”

The property is owned by Crozet Development Solutions, a limited liability corporation associated with the Piedmont Housing Alliance.

The Comprehensive Plan recommends stream crossings occur only where they are identified in master plans, and the Crozet Master Plan does not recommend a second crossing of Powell’s Creek.

“While strictly speaking it’s not consistent with [the master plan], it does get at the important principle of an interconnection, a second point of access,” Dotson said.

The special-use permit request will be reviewed next by the Board of Supervisors.