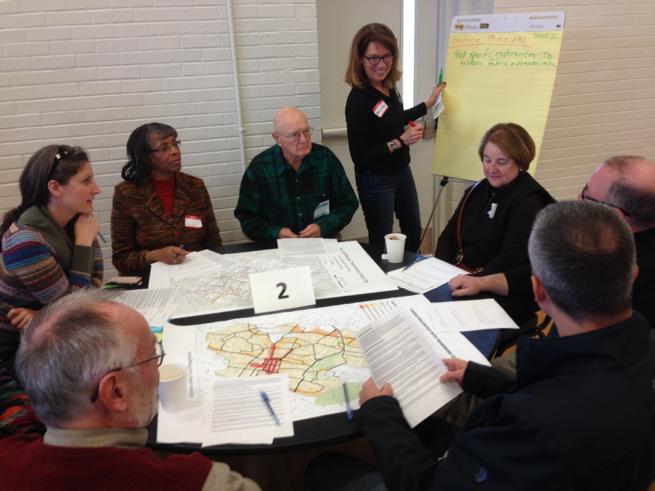 Several attendees of a workshop held to gather the public’s ideas on improving Charlottesville’s street network called on city officials to demonstrate whether they can begin to implement some of them.

“There’s a concern that while we want things to be thought through holistically, we also are eager to stop talking about it and start doing,” said Melissa Wender, one of around 80 people who attended the Streets That Work forum Saturday at the Carver Recreation Center.

The workshop was the latest public meeting to collect ideas on how to make the city’s streets safer for pedestrians, cyclists and motorists. The “complete streets” initiative stems from a policy the City Council adopted in December 2010 and updated in February.

Saturday’s workshop began with a video from Ian Lockwood, an urban designer with the Toole Design Group. Lockwood was hired this past May to lead a four-day workshop designed to provide concrete recommendations for how to better implement the policy.

The general idea is to classify streets with a hierarchy that includes so-called framework streets at the top. Staff said these arterial roads would be less likely to receive simple traffic calming devices and more likely to be put on a “road diet,” where vehicular lanes could be eliminated in favor of street trees, wider sidewalks or a buffered bike lane.

One of the challenges that Charlottesville faces is that many arterial roads already are relatively narrow and cannot accommodate all of the amenities.

“That takes a lot of right of way,” said Jim Tolbert, the city’s director of neighborhood development services. “Instead of the 80 feet that would be our ideal, a lot of our streets have 50 feet, so we have to talk about prioritizing and how to make decisions.”

Tolbert said the workshop continued the prioritization process. It was held at a time when Charlottesville is in the midst of four separate planning efforts. In addition to Streets that Work, the city is updating the 2004 bike and pedestrian master plan, auditing the zoning ordinance and developing a green infrastructure plan.

“All of them are related and have different ways of tying into the city’s vision of our city’s streets,” Tolbert said.

Participants split into 10 groups to brainstorm ideas. To start off their conversations, facilitator Allison Linney asked a series of questions about what participants thought the city should keep in mind as it continues developing its policies.

“Our streets as they exist today don’t necessarily lend themselves easily to being framework streets,” said Jeff Greer of the Fry’s Spring neighborhood. Enhancements to pedestrian railroad crossings were among suggestions from his group.

“The needs of the property owners and residents need to be taken into account when we’re looking at all these issues,” said Bruce Odell of the Martha Jefferson Neighborhood Association. “There needs to be a strong emphasis on the safety of pedestrians at crossings in particular.”

“We talked about slowing down traffic and narrowing streets,” said Eric Pugh, another participant. “We thought that was an important thing to facilitate to enhance pedestrian connectivity for pedestrians and cyclists.”

Bill Emory, a Woolen Mills resident who formerly served on both the city’s Planning Commission and Tree Commission, suggested city government could reorganize to help speed up implementation.

“We would like to see a street czar who actually has some authority over all these departments to implement some of these design projects,” Emory said.

Tolbert said an advisory committee will be formed to oversee staff’s distillation of the public input into recommendations.

“They’ll be a smaller group sounding board that will help us think through some of these things,” Tolbert said. “Right now, we’ve got 50 to a hundred ideas people have but how do we start prioritizing those? That’s going to be a critical piece of this.”

As far as implementation, Tolbert said his staff may become more experimental in the use of paint to temporarily test new traffic patterns.

On Dec.18, the council is slated to be presented with the final results of a West Main Street study that will suggest changes to zoning as well as a new streetscape.