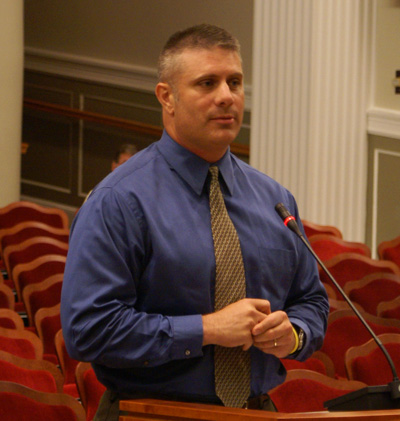 At a joint town hall-Crozet Community Association meeting last week at the Field School in Crozet, Albemarle County officials provided updates on the progress of the Crozet streetscape project.

Linked to goals in the Crozet Master Plan, the streetscape project aims to update infrastructure in downtown Crozet to promote economic development in the designated growth area.

“These projects are the culmination of 20 years of work,” county Supervisor Ann H. Mallek said at Thursday’s meeting. “Remember that this community made their own master plan. They are always looking for something that they can do together.”

“Phase one of Library Avenue is now complete,” Henry said, “and while the road is still county owned, we’re in the process of having that road turned over to the state so [the Virginia Department of Transportation] will maintain it.”

“And thanks to a lot of hard work by Ann Mallek,” Henry added, “the CSX parcel [known in Crozet as the Square] has been deeded over to the county.”

Acquiring the CSX parcel is significant for two reasons. First, this ensures a permanent parking area to serve the businesses in the Square. Second, it will allow the county to relocate the power lines that run along Crozet Avenue into the alley that runs south toward Tabor Street.

One snag hindering county progress is a stretch of CenturyLink cables below Crozet Avenue that currently lie where the county hoped to install stormwater pipes.

“When VDOT started the Jarmans Gap project, we gave them our drawings so they would know where our lines would go,” Henry said, “but VDOT directed CenturyLink to put their lines where our stormwater pipes need to be.”

“We tried to coordinate the best we could with the entities involved,” Henry added, “and we’re still investigating who gave direction to whom.”

The area in question runs across Crozet Avenue from the corner of Jarmans Gap Road to a property beside the site of the new library, and the estimated cost of moving the CenturyLink lines is approximately $30,000. VDOT and the county are currently working out responsibility for this cost.

Crozet is a designated growth area in the county’s Comprehensive Plan, but Realtor Jim Duncan says he’s not seeing a direct correlation between the infrastructure projects and increased interest in Crozet.

“There’s a paradigm shift happening right now,” Duncan said. “A few years ago, homebuyers only planned to live in a house for two to three years and then sell. Now, homebuyers are looking to stay in a home for much longer.”

“I’ve had five or six people tell me that they want to live in Crozet, but that they don’t know what Crozet will look like in 10 years,” Duncan added.

Frank Calhoun, who sits on the board of Scenic Virginia, has noticed increased traffic issues and doesn’t care for some of the aesthetic choices being made.

“I went to get film at Harris Teeter the other day,” Calhoun said. “I got there just fine, but on the way home, I never went over 20 miles per hour.”

“Development is necessary,” Calhoun added, “but ugliness is not.”

Mary Rice, of White Hall, noted some of the growth’s silver lining.

“We have accepted that this is a growth area, and we’re enthusiastic that the county is providing infrastructure,” Rice said. “We’re in support of ways to improve the quality of life in the area.”