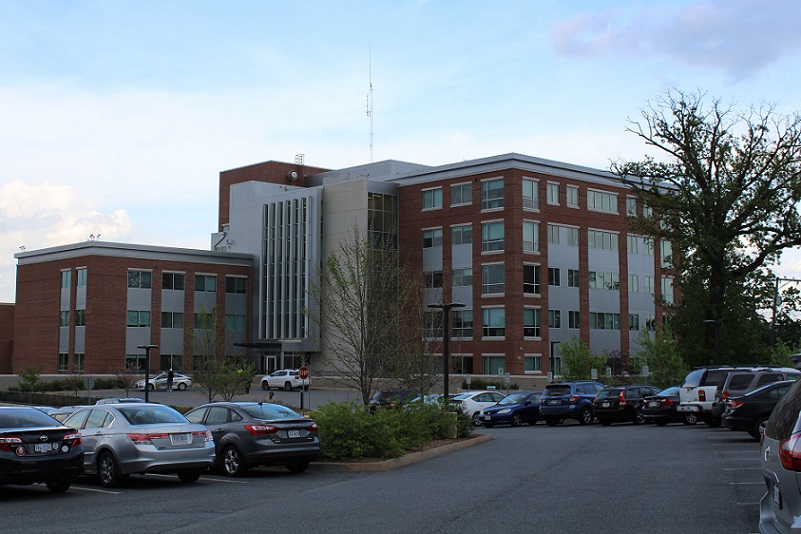 One wall of the cafeteria at the CFA Institute’s Global Operations Center in downtown Charlottesville is decorated with photographs of people who live in nearby neighborhoods.

“They remind us of the community we are joining,” said Kelli Palmer, CFA Institute’s director of corporate citizenship.

The not-for-profit, which moved into its current offices in the old Martha Jefferson Hospital in 2013, contributed $104.6 million to the area’s $12.6 billion gross domestic product in 2016, according to the Weldon Cooper Center for Public Service at the University of Virginia.
In a study commissioned by CFA, the Weldon Cooper Center found that the organization had a total economic output of $261 million and supported 1,005 jobs in the region. That includes 250 “indirect jobs” — jobs in businesses that provide goods and services to CFA Institute — and 297 “induced jobs” — jobs created by household spending that CFA Institute supports.
The study, which will be released Monday, covered the organization’s impact in the city of Charlottesville and Albemarle, Fluvanna, Greene and Nelson counties.
CFA itself was the fifth-largest private employer in the city in 2015, with more than 450 employees making an average of $81,513 per year.
The institute creates and administers educational materials and exams for the Chartered Financial Analyst certification. The credential is highly regarded by investment firms across the world — the CFA exam was administered about 250,000 times last year.
“This study has been our wish for many years,” Palmer said. “Our employees had a desire for a concrete understanding of who we were to Charlottesville. … They feel proud to be an important part of the Charlottesville ecosystem.”
According to the study, CFA Institute had a $46.3 million employee payroll in 2016, and paid regional vendors $6.7 million for operational expenditures.
Stephen Horan, CFA Institute’s managing director of credentialing, praised the Weldon Cooper Center for taking a thorough look at the business and how its employees interact with the community.
“Most economic impact studies focus on pecuniary impact: dollars and cents, and jobs,” Horan said. “This study did that … but it was very good at teasing out what was good for the community in other dimensions, as well.”
The study notes that multiple CFA Institute employees serve on nonprofit boards in the area. Horan, for example, is on the board of the Charlottesville Regional Chamber of Commerce.
“Not only does CFA Institute create a more highly skilled workforce locally — it provides a skill set that can be applied across the greater community,” Horan said.
CFA Institute and the Charlottesville-based Center for Nonprofit Excellence are designing a finance academy for board members, executive directors, finance managers and other staff at nonprofit organizations in the region.
“We are helping nonprofits have more money to make Charlottesville a better place to live,” Palmer said. “We hope that we can replicate this program around the world.”

In 2013, CFA Institute spent $35.7 million to repurpose the former Martha Jefferson Hospital as its Global Operations Center. Ten local subcontractors were paid a total of $11.7 million for their work on the project, which generated 132 jobs.
The new office building received LEED Gold certification for its environmentally friendly design. It features rooftop solar panels and a “greywater” recycling system that reduces its water use by 70 percent.
“Achieving the LEED certification reflects our desire to provide a superior environment for our employees and our neighborhood,” said Guy Williams, CFA Institute’s head of finance and operations. “Simply put, it’s the right thing to do.”
Horan said that the organization’s swift move to the Martha Jefferson property prevented the empty hospital buildings from bringing long-term blight to the neighborhood.
The city was eager to bring CFA Institute to the site. In 2011, the City Council agreed to give CFA Institute a 50 percent break on real estate taxes for its first 10 years of occupancy.
CFA Institute paid $1.18 million in local taxes and fees in the 2016 fiscal year, according to the Weldon Cooper Center report.
Chris Engel, Charlottesville’s economic development director, said the city has benefitted from CFA Institute’s presence.
“The city gained new capital investment, job creation and an excellent corporate citizen in a process that was both quick and thoughtful,” Engel said.
“CFA is a perfect fit for the city, and we are confident that they will continue to thrive in their new home.”
The arrival of CFA Institute helped Charlottesville counterbalance the economic effects of Martha Jefferson’s move to a larger campus in Albemarle County. CFA Institute previously was located at UVa’s Fontaine Research Park in the county.
“The most important thing is that we grow our regional economy for the benefit of both jurisdictions,” said Lee Catlin, assistant county executive.
“CFA Institute’s relocation from Albemarle County to downtown Charlottesville, as opposed to another locality outside of our region, preserved quality jobs and economic vitality,” she said.
CFA Institute last year paid the Albemarle County Public Schools about $500,000 to rent out Monticello High School for four weeks to host its annual exam grading conference.
It also hired the county schools’ food service to provide breakfast and lunch to CFA exam graders for an estimated $266,000.
Williams said CFA Institute spends more than $1 million annually to reserve hotel rooms for the 800 exam graders from around the world.
Playing a critical role in global investment management for more than a half-century, CFA Institute has never strayed from its local origins.
CFA Institute opened in 1962 in a small office at UVa. Today, it operates in Brussels, Beijing, Hong Kong, London, New York and Mumbai, India. But most of the organization’s employees are based in Charlottesville.
“CFA Institute tries to make financial markets all over the world as sound, ethical and thoughtful as humanly possible,” Palmer said. “And it’s the people of Charlottesville who make this work.”