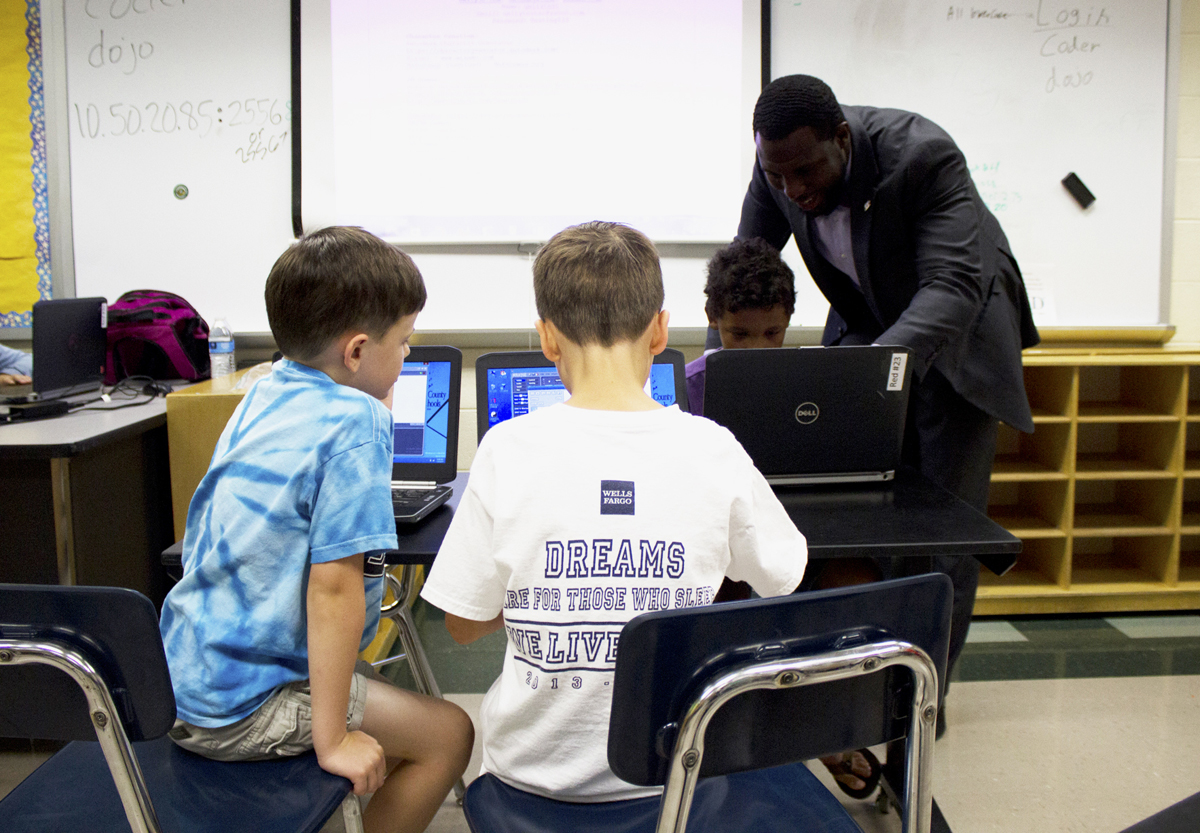 In a classroom full of laptops and giggling children, three girls hunch seriously over a computer trading insights in rapid Spanish about a game. They represent a much more diverse group of students who are learning to code and play with computers at the CoderDojo summer academy.

CoderDojo, a weeklong camp hosted by Albemarle County Public Schools, allows kids to get hands-on experience with technology. The program has expanded from 600 students in 2012 to almost 1,000 this summer.

Ira Socol, Albemarle’s assistant director for education technology, said a goal has been to increase the diversity of participants. Around 80 spots were reserved this summer to give families who don’t own home computers a chance to sign up.

“We realized that computer registration was leaving out a big chunk of kids who don’t have a computer at home or whose parents didn’t know how to navigate it,” Socol said.

Outreach efforts sought to broadly include all students – including female students and students from rural areas – and this year saw an increase in participation from English language learners, students for whom English is not their native language.

For kids whose families don’t own a home computer, building essential computer literacy skills can be a challenge, particularly as schools move to incorporate more technology into daily lessons.

“The ability to just play for four days with this stuff demystifies it and builds confidence,” said Socol.

In addition to the computer literacy skills CoderDojo emphasizes, students learning English as a second language received a dose of new vocabulary.

“We’re working with them and naming things and getting language into it,” Socol said.

Elaine Cecelski-Ayala, a family engagement worker, observed that language differences between children did not seem to pose obstacles to collaboration.

“Kids help each other,” she said. “They have none of the frustration I feel as an adult. If they don’t know how to do something, they find someone who does.”

At CoderDojo, students are able to observe one another’s actions on the computer, allowing them to demonstrate their knowledge even as they continue to learn English words to describe what they are doing.

“You can learn programs from any computer, but that’s not what we have here at CoderDojo,” said Nicolas Gutkowski, a rising 10th-grader at Albemarle High School who was a volunteer teaching kids to use Scratch, a video game-making program.

“A lot of the kids have brought boatloads of energy,” said Bellamy. “Kids have been learning in a nontraditional sense. Some are sitting on the floor, others are in the courtyard.”

Since its inception two years ago, CoderDojo’s Summer Academy has gained popularity among students. During its first year, the summer academy filled almost instantly, generating a waitlist that numbered in the thousands.

Socol remembers being surprised by the response to CoderDojo’s first year, during which all 400 spots filled within 20 minutes of being announced, leading the division to add an additional 200 spots.

“Someone said the first year that it was like trying to get tickets to see the [Rolling] Stones,” he joked.

To solve the problem of transportation during the day, when parents might be working, the program was able to obtain local funding for a school bus to transport students from morning summer school at Agnor-Hurt Elementary School to Jack Jouett for CoderDojo afternoon classes for two weeks.

“Because we’re not a multilingual nation we tend to think of [the language barrier] as a problem and not think about opportunities,” said Cecelski-Ayala. “My job is reminding the system these kids are here.”

As the program grows, Socol hopes to see the principles that guide CoderDojo employed throughout the school year.

“We want kids to be makers, not just controllers,” Socol said. “We want them to see that technology is not a consumer tool but a maker tool that allows them to change their lives.”