Supervisors briefed on next phase of Rio Road plan 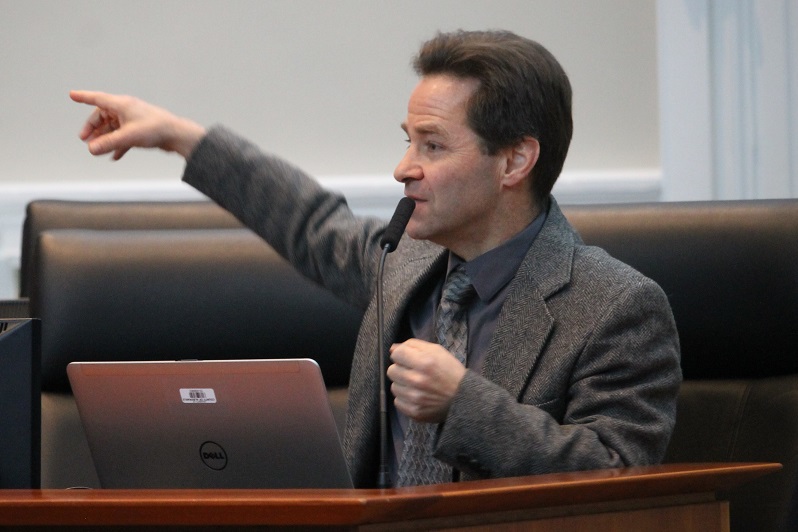 As motorists continue to get accustomed to the new grade-separated intersection at U.S. 29 and Rio Road, Albemarle officials are envisioning a “transformational” future for the land in the vicinity.

Albemarle is about to enter into the second phase of a three-stage process to create a small-area plan to guide development in and around the intersection. Supervisors were briefed March 1 on the vision created in the first phase through community input.

“I am really excited about this step forward,” said Supervisor Ann H. Mallek, who served in the last decade as a member of the Development Review Task Force before being elected to the board in 2007.

The next step is to translate a vision for a walkable Rio Road area into changes to the county’s development review process that will encourage transit-oriented development.

“Phase two will involve in all likelihood a detailed design of the Rio Road and U.S. 29 node,” Gast-Bray said. “It will entail a strategy for transportation and an implementation strategy that would involve, probably, form-based [zoning] code as a mechanism to help make this happen.”

One goal is to increase the value of the land by making it a more attractive destination for businesses and homes. Another goal is to make sure development is tapered down so that it is less intensive away from the center.

Gast-Bray said the mechanism will be creation of a form-based zoning code for Albemarle, similar to the one created for downtown Crozet and adopted in 2008.

“When we talk about a form-based code we work on the relationship between buildings and streets,” Gast-Bray said. “We talk about what forms we want as well as uses. And we talk about the performance and character of that development combined with transportation and economy.”

Gast-Bray said conventional zoning is controlled by words whereas form-based code features pictures and diagrams. He said this could encourage mixed-use multi-story buildings similar to the downtown mall.

“If you want that, you kind of have to tell them that’s what you want so you need to regulate it,” Gast-Bray said. “We need to think about where we want that and be specific in how we permit it.”

Mallek warned that financing can be a challenge for developers who want to build multi-story buildings with multiple uses.

“I went and talked to slews off local bankers who said they wouldn’t touch it with a ten-foot pole,” Mallek said. “If it were owned by one person and rented out with different levels, but no one was going to finance condominium residential over offices in the same building.”

Gast-Bray said one goal is to get financial institutions involved in the development of the code as potential partners.

“Then they are engaged and they often become the champions,” Gast-Bray said. “There are [also] opportunities for economic development authorities.”

Albemarle supervisors are also exploring ways to launch their own bus routes. Gast-Bray said the county must be specific about where it wants transit. He also said the review process must be streamlined for developers in order to incentivize the kind of development the county wants.

“If you’re going to get development not being exclusively car-based, we’re going to have to change something,” Gast-Bray said. “If we put transit first as a priority, it might mean that the first year or two we won’t have those full transit vehicles to start off with because the development isn’t there yet. But, you’re not going to get that development if you’re giving emphasis to cars.”

Supervisors were generally receptive to the presentation but some wanted to make sure office space would be encouraged rather than retail.

“We have some flexibility in commercial now but maybe we can think about ways to increase that,” Mallek said.  “I’m very reluctant to focus all of this on retail. I want to make sure we are emphasizing the employment side as much as we possibly can.”

Emily Kilroy, Albemarle’s community engagement specialist, said a variety of stakeholders are involved in the development of the form-based code, particularly to spur economic development.

“How can the Rio and U.S. 29 corridor be a place for small start-ups to grow into small businesses?” Kilroy asked. “How can we bridge the divide that U.S. 29 currently serves in the area?”

“I think about it from the standpoint of a vision for the centralized county office building.” Randolph said. “I see courts being there. Maybe not all of them, but some of them.”

Supervisor Diantha McKeel said the legal community needed to be involved in the second phase.

“The users of our courts need to be at the table so they’re understanding what we’re looking at,” McKeel said.  “They are part of our community.”

Supervisor Norman Dill asked if the form-based code could prepare the county for a future with light rail, prompting a sharp response.

“We do not have the density for rail and won’t have it in [the near future],” Gast-Bray said. “Just let that one go. What we need to worry about is getting the place to happen. A good land use plan is a good transportation plan.”

Gast-Bray said the county can also coordinate the Rio Road small-area plan with the one getting underway for the intersection of Hydraulic Road and U.S. 29.  A panel overseeing that project holds its first meeting on Thursday, March 9 at 2 p.m. at the Virginia Department of Transportation’s research center on Edgemont Road.

The second phase of the Rio Road small-area plan will be continue this spring with a series of design charrettes in CitySpace.