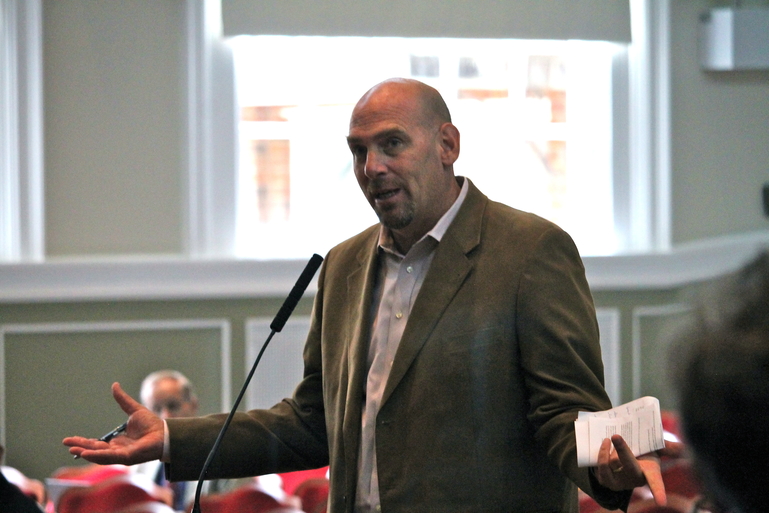 Dan Rosensweig, president and CEO of Habitat for Humanity of Greater Charlottesville, speaks before the Board of Supervisors.

The Albemarle County Board of Supervisors has unanimously passed a resolution backing the county’s collaboration with an area housing nonprofit as it redevelops Southwood Mobile Home Park.

At the board’s meeting Wednesday, Supervisor Rick Randolph said the resolution marked an “exciting launch of a new era” for Southwood, a 120-acre neighborhood of 1,500 residents in 320 trailers.

Habitat for Humanity of Greater Charlottesville plans to transform the neighborhood into a 700-800-unit, mixed-use community without displacing any current residents. Habitat has pledged that the project will create a net increase in affordable housing.

The organization purchased the 88-acre Southwood property in 2007 for $7 million; it also has bought nearly 32 additional acres nearby. Habitat has invested more than $2 million in road improvements, sewer upgrades and other infrastructure.

The resolution passed by the board says that “additional infrastructure improvements will be needed which may be in excess of [Habitat’s] capability to fund without assistance.”

A study by the Weldon Cooper Center for Public Service at the University of Virginia estimated that the proposed redevelopment of Southwood would save the county $21 million in relocation costs — if the residents were hypothetically all displaced — and would generate 17 times more tax revenue from the community.

“That didn’t seem to be the most productive partnership role,” Walker said.

Walker said a resolution articulating the county’s intent to begin a close collaboration with Habitat “really enables staff to work differently in helping Habitat and the board navigate what is clearly going to be a complex implementation plan.”

Dan Rosensweig, president and CEO of Habitat for Humanity of Greater Charlottesville, said the redevelopment would create new multimodal transportation routes to the new Wegmans grocery at 5th Street Station. He also said Southwood’s proximity to the planned 1,200-acre Biscuit Run State Park could make the neighborhood an entry point to hundreds of miles of trails, some extending to Scottsville.

“I think that’s a huge win for this community,” Rosensweig said.

“I appreciate … that Habitat is willing to be the ‘guinea pig’ because it’s always very hard to be the first when you’re trying to figure out a new way for government process to work,” Mallek said.

Before the board’s discussion, two Southwood residents spoke in support of the redevelopment project.

Michelle Crawford, a 23-year resident of Southwood, said the neighborhood is “the kind of place you want to live.” On Crawford’s invitation, about 20 people in the auditorium stood to show their support for the resolution.

“The people [in Southwood] are wonderful. Everyone helps each other out,” said Crawford, who works as Habitat for Humanity’s maintenance manager for Southwood. She praised Habitat for bringing two parks, a bus stop and an expanded Boys and Girls Club facility to the neighborhood since its 2007 land purchase.

Speaking through a Spanish-language interpreter, Maria Guadalupe Flores-Alberto said she has enjoyed Southwood’s community spirit during her eight years there.

“We get together to organize events, like the festivals for autumn and Christmas,” she said.

Fighting back tears, Flores-Alberto added: “Before, I was very sad and wanted to go back to Mexico. But since I arrived here, I’ve felt very comfortable … We have felt very at home.”

Walker said the next step for Habitat and the county was to complete an action plan that will identify each step of the Southwood project.

“Some of [the steps] may be simple. Some of them may not be simple,” he said.