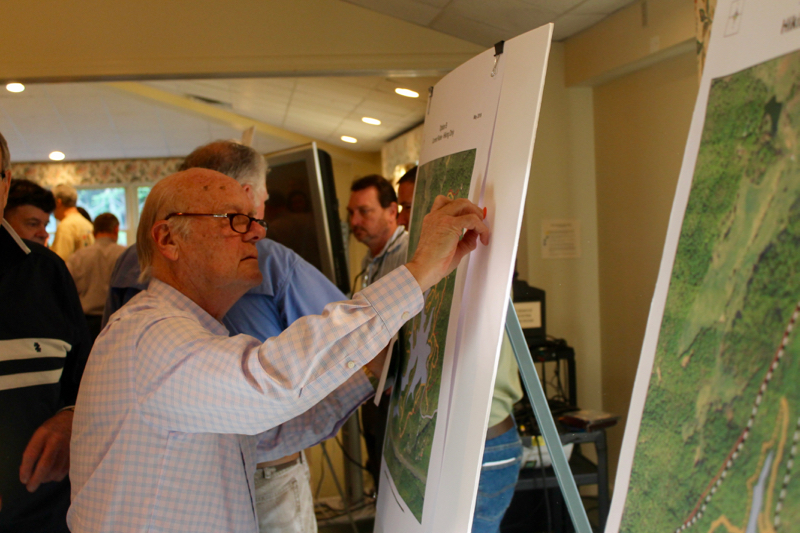 Attendees were able to express their preference for a specific plan by placing a sticker on the plan of their choice. They could also write comments on a separate poster.

After several months of public debate over whether or not to allow bikes and dogs into the Ragged Mountain Natural Area, Charlottesville officials have developed four potential options for public use of the reservoir’s forested watershed.

“The world is exploding around us, and here we have a gem that’s about to be taken off the books in terms of being the sanctuary and thrust into the mainstream of daily commotion,” said city resident David White, who opposes the introduction of bikes and dogs.

Charlottesville Parks and Recreation staff said they were trying to “balance the desire for recreational uses, the desire for passive uses [and] the strong desire to protect the resource.”

Option A would end public access to the land, with the exception of Rivanna Water and Sewer Authority personnel who would need access for water supply-related issues.

Option B would maintain the rules that have been in place since 1999 and prohibit jogging, biking or dog walking but allow for hiking, fishing and boating.

The Parks and Recreation Department assumed management of the natural area from the Ivy Creek Foundation following the completion of the new Ragged Mountain Dam in 2014 and proposed shared use of the park on designated trails in 2015.

City Council considered these rule changes but tabled the proposed ordinance until an ecological survey and a formal planning process for the Ragged Mountain Natural Area was completed. The council also passed a motion to agree in principle with shared use of the land.

Under Option C, bikes would be permitted on road beds on the perimeter of the site and also would be allowed at two locations where the beds go down to offer a clear view of the reservoir.

Both hikers and joggers would be allowed on all trails at the natural area with Option C.

Option D was the same as Option C, with the addition of shared use for dog owners on the road beds.

“To me, Parks [and Recreation] has not listened to the public comments, and there’s no ‘Option E’ that says bikes, respectfully, can have access [to the trails].”

Gensic said dog walkers would be allowed to come near lake viewpoints but would be limited in their access to shoreline out of environmental considerations.

“If there was some waste left way at the top of the ridge on that road bed, its potential to migrate into the water supply would be extremely, extremely, extremely low and nature would have taken care of it before it ever falls into the lake, hypothetically,” Gensic said.

Dog walkers would face the same regulations at Ragged Mountain as dog walkers at other city parks, which require dogs to be on leashes and that waste be cleaned up.

Gensic said they considered an “everybody on every trail” shared-use option, but given the space limitations of some of the trails, they ultimately did not propose such an option in their plans.

“To me, Parks [and Recreation] has not listened to the public comments, and there’s no ‘Option E’ that says bikes, respectfully, can have access [to the trails],” said city resident Jonathan Ciambotti.

Ciambotti is a member of the Charlottesville Area Mountain Bike Club and the Rivanna Trails Foundation. He said biking could be done at Ragged Mountain sustainably and safely.

Parks and Recreation Director Brian Daly said trail locations have been proposed with the ecological survey of the land in mind and are sited to be as far outside of the most sensitive ecological areas as possible.

“We will gladly accommodate all user groups — that is what shared use is about,” Ciambotti said. “The only option here is we get less than 10 percent of the land use, and that is in direct contradiction to what the public has said at all these public meetings.”

Other attendees thought the natural area’s rules should remain unchanged.

White said the majority of parks in Charlottesville and Albemarle County allow for dogs and bikes, while there are only two natural areas — the other being the Ivy Creek Natural Area.

“A person or several persons walking through parkland doesn’t have the same impact as dogs or bicycles riding through it,” White said in an interview. “Those aren’t bad people, those aren’t bad things to do, but this is just one area that needs to be a haven … for the creatures that live there.”

Attendees voted on their preferred plans, and the so-called Option E — which would allow bikes on designated trails besides the road beds — won with 35 votes. Option B received 28 votes to maintain the current rules. None of the other options received more than 13 votes.

“We’ll take all of these comments, digest them and come up with an option,” Daly said.

Public hearings will be held on a draft master plan for the park in front of the Parks and Recreation Advisory Board and the Planning Commission. A 30-day public comment period also will be held for the draft plan.

A final park master plan will then be adopted by the Parks and Recreation Advisory Board and sent to City Council in the next 45 to 90 days.