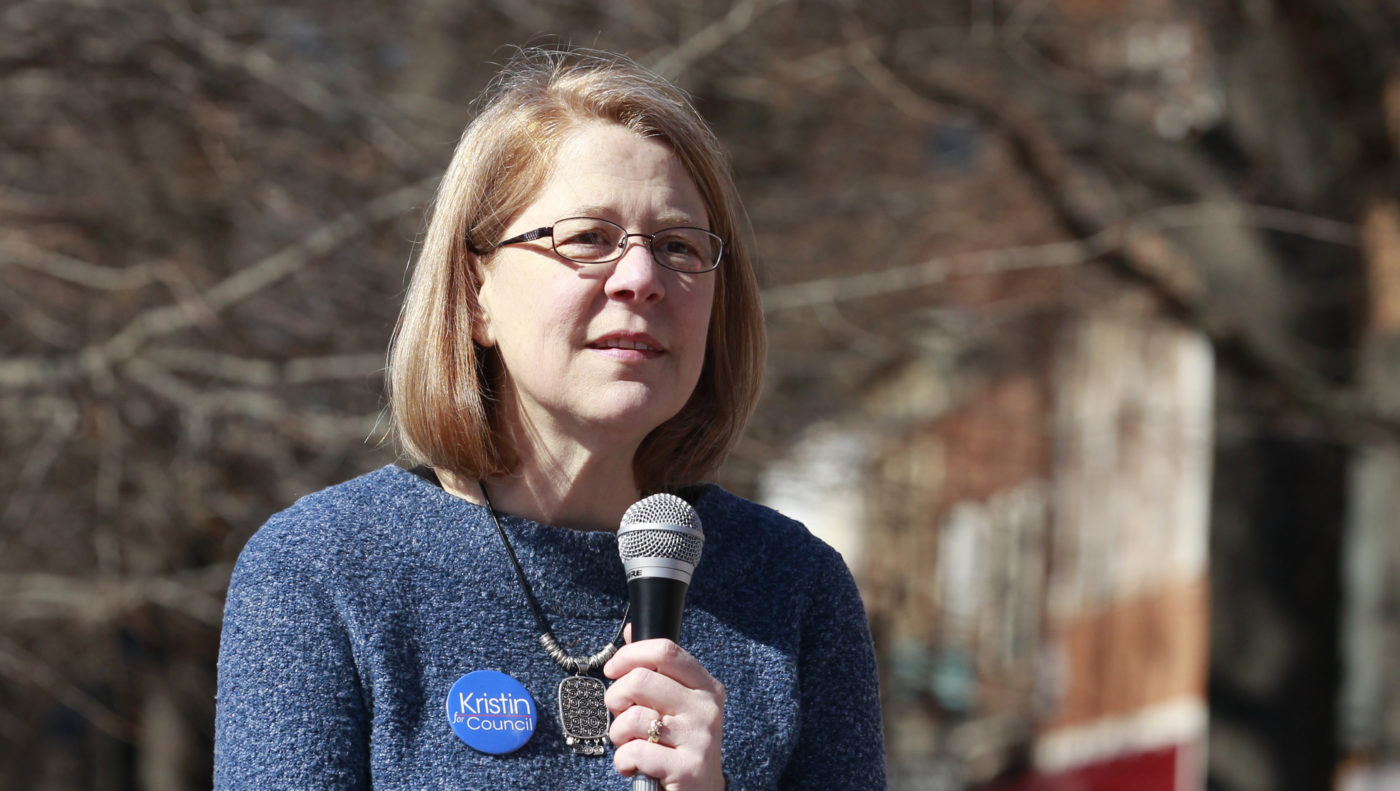 Former City Councilor Kristin Szakos announces her re-election campaign in 2013. Szakos has applied for an interim appointment to the Charlottesville School Board.

For the second time in four years, Kristin Szakos chose Valentine’s Day to announce her candidacy for the Charlottesville City Council.

“We have a lot of work left to do,” said Szakos in an announcement Thursday at the Community Chalkboard on the Downtown Mall.
Szakos, 53, announced her first bid in 2009 after working on President Barack Obama’s first campaign. She beat incumbent Julian Taliaferro in the Democratic nomination process that year.
“I had no experience in city government, little name-recognition outside of the Obama campaign, and I’d only been to a few city meetings,” Szakos said. “I had realized that a lot of what people need and expect from government doesn’t come from Washington. It comes from City Hall.”
Szakos was introduced by Wes Bellamy, a teacher at Albemarle High School.
“Since joining City Council in 2010, Vice Mayor Kristin Szakos has been recognized as a leader both locally and nationally,” Bellamy said.
Bellamy said results of Szakos’ first term include adjusting the noise ordinance to protect residents; creation of the City Council town hall meetings; and pushing for additional infrastructure for bicycles and pedestrians.
Bellamy also credited Szakos for encouraging him to create the nonprofit group Helping Young People Evolve. HYPE is an after-school boxing program that seeks to build self-esteem in its participants.
In the past three years, Szakos has served as the chairwoman of the Metropolitan Planning Organization and and as a member of the Planning and Coordination Council.
Szakos, who works as a writer and editor, is the first candidate to declare for one of two City Council seats open this election cycle.
Councilor Dave Norris announced in late January that he would not seek a third term.
“It’s quite early,” said James Nix, co-chair of the Charlottesville Democratic Committee. “Her announcement will probably spark interest among other candidates.”
Szakos said she has been in communication with several potential candidates to run for the Democratic nomination and so far none of them has agreed to do so.
“We really need to be making sure that we hear the voices of leadership in the community and encourage people to run for office,” Szakos said.
Bellamy said he is not planning to run for the City Council this year, but will consider it in the future.
“There’s not a day that goes by where I don’t get asked that question,” Bellamy said. “I’m still in graduate school, I’m teaching at
Albemarle High School and I’ve got my nonprofit to run.”
Buddy Weber, chairman of the Charlottesville Republicans, said his party is looking for candidates to run this year. The Republicans have
not fielded a candidate since 2006.
Nix said that while there is only one announced candidate for the council, two people are seeking the Democratic nomination for commissioner of revenue. The incumbent, Lee Richards, has announced he will not seek another term.
Both Jonathan Stevens and Todd Divers were at Szakos’ announcement to collect signatures to qualify for the nominating process.
People seeking to compete in the Democratic nomination have until March 28 to file their candidacy. The primary will be held June 11.