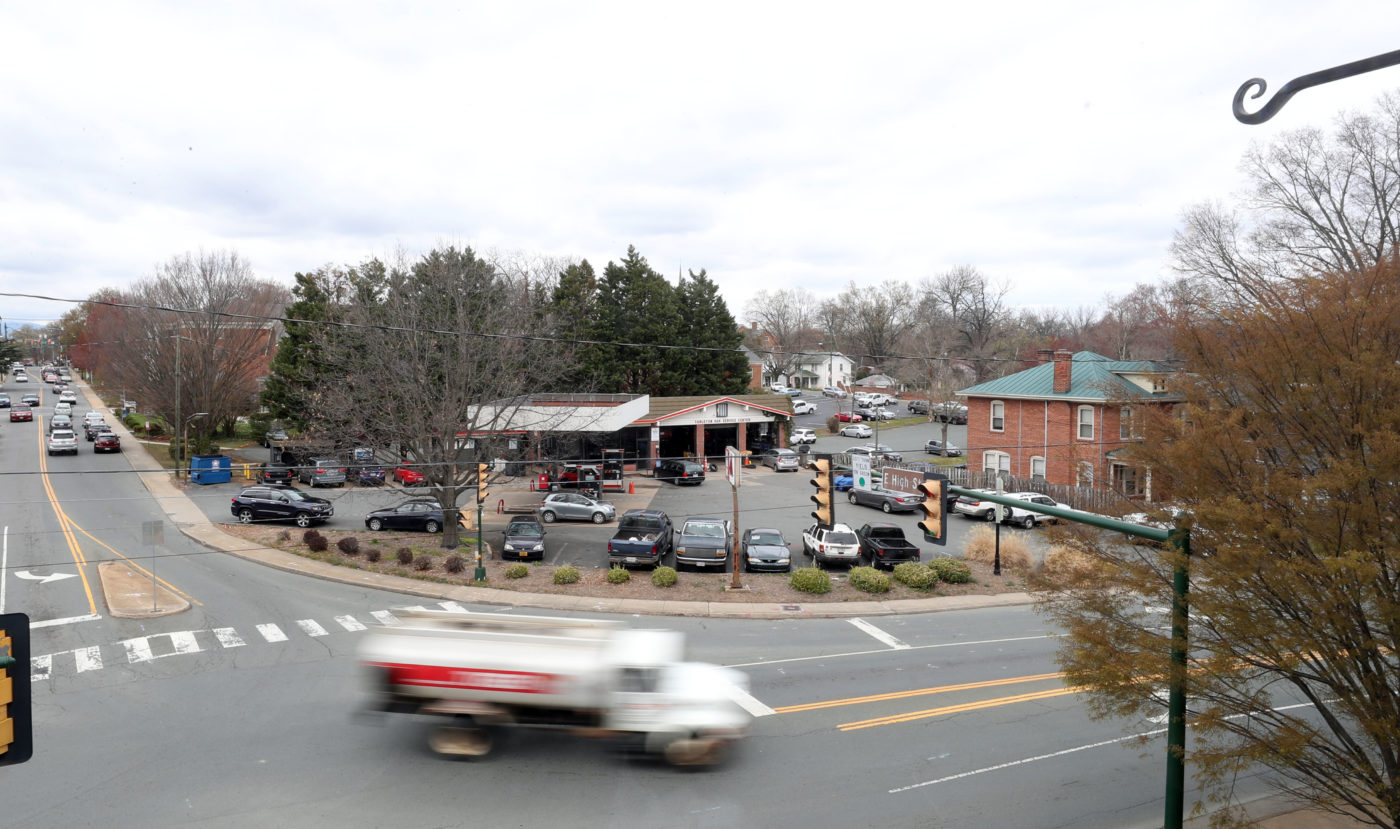 As the city works on a future streetscape for East High Street, city planners are evaluating a layout for a five-story office building that would replace the Tarleton Oak service station.

Tarleton Oak LLC has submitted a site plan for a two-phase project that would first see construction of the office building, followed by a 56-unit apartment complex. There would also be a 334-space parking structure to support both.

“The anticipated start date for construction is fall 2018,” reads a note on the site plan.

The property is within the city’s Downtown North zoning district which allows for such development without a special-use permit. The office building will need a certificate of appropriateness from the Entrance Corridor Review Board. The apartment complex will need the approval of the Board of Architectural Review.

The office building would have 86,107 square feet of space and would require 86 parking spaces.

The second phase would consist of 56 two-bedroom units, requiring another 56 spaces. In all, only 144 spaces are required under city ordinance.

The deck would replace an existing surface lot according to the developer’s representative.

“We currently provide approximately 120 parking spaces for people who work in Downtown Charlottesville,” said Jennifer Feist in an email to Charlottesville Tomorrow. “We would like to retain existing parkers on site as well as provide parking for all tenants of our project.”


A site plan conference will be held at 10 a.m. Wednesday in the Department of Neighborhood Development Services conference room in City Hall on Market Street.

John McLaren, president of the Martha Jefferson Neighborhood Association, said the development gives him another reason to pay attention to the ongoing review of the city’s Comprehensive Plan.

“People are sad to see an old landmark go, but it seems to be inevitable due to the economics of the situation,” McLaren said, speaking for himself and not on behalf of the association.

“Although it is consistent with zoning rules, five stories in that spot seems excessive to some of us at least,” he said. “Thoughtful use of form-based code can ensure that we would have something of a buffer zone, so we won’t have a high-rise office building right next to single-family homes.”

The site is also the location of a famous oak tree that was cut down in 1997. The spot is rumored to have been the camp location of a British Army unit led by General Banastre Tarleton during the Revolutionary War.

In addition to the service station, a commercial building at 404 8th Street NE will also be demolished. Tarleton Oak LLC purchased that property in September 2015 for $1.25 million. The company also owns five historic homes on Lexington Avenue which were formerly owned by Martha Jefferson Hospital.

The project will get underway at the same time the city is working with the firm Kimley-Horn on a $5.63 million streetscape project for East High Street. The next public meeting for that project will be held from 9 a.m. to noon April 21 in CitySpace