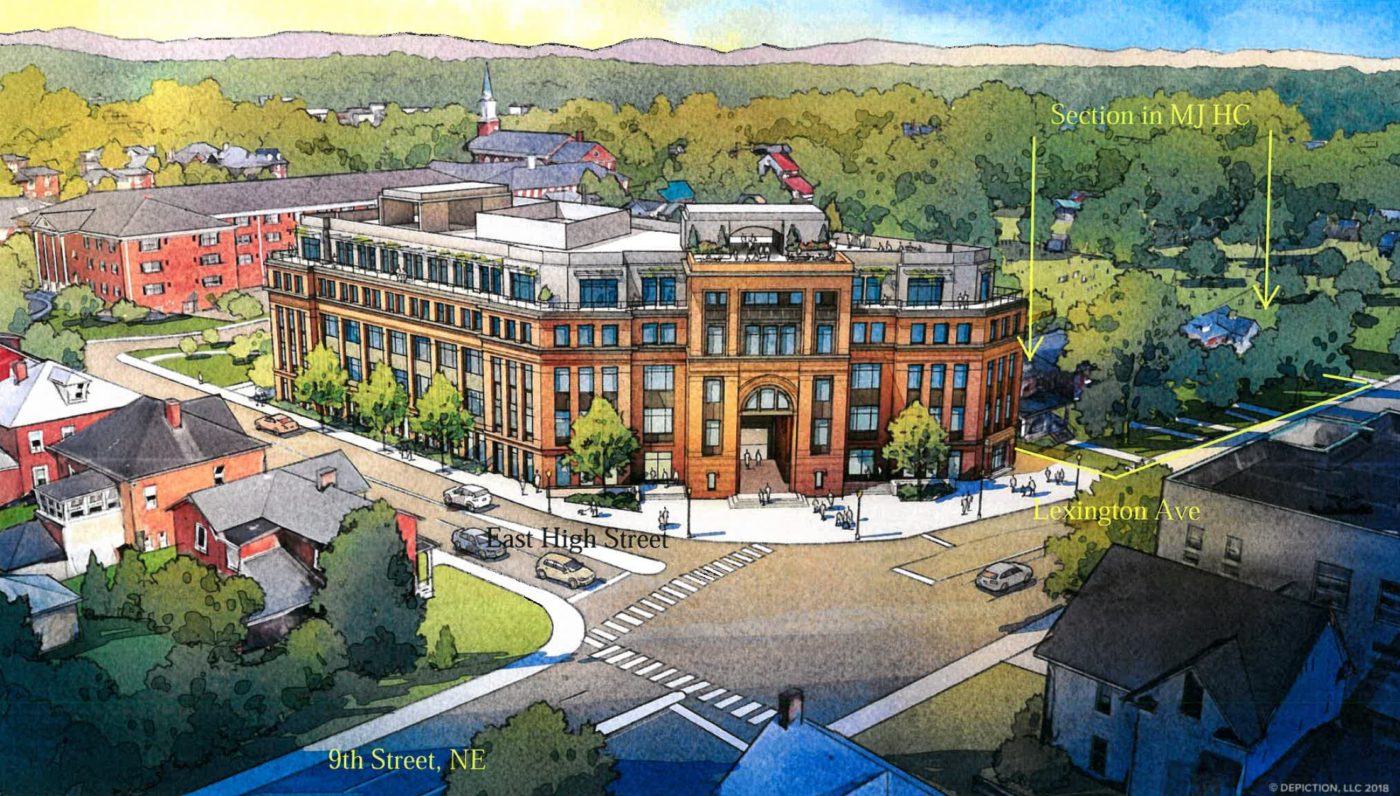 The Charlottesville Board of Architectural Review has approved plans for a five-story office building that would replace the Tarleton Oak service station on East High Street.

“I think there is something really impressive about what you are proposing here,” said BAR member Stephen Balut. “The best thing is that it is a very underutilized intersection for sure right now and so there’s a lot of value in it.”

The office building and accompanying parking structure would be the first phase of a project that eventually would include 56 apartments. The applicant is Tarleton Oak LLC.

“Phase two of the project anticipates a two-story residential structure on top of that parking structure.”

Design review for the entire project is split between the Board of Architectural Review and the Planning Commission in its capacity as the city’s Entrance Corridor Review Board.

“It’s an entrance corridor on one corner and it’s a historic district on another corner, with one parcel that overlaps,” Werner said. “The rear of this block on the west is not in either.”

Ashley Davies of the firm Williams Mullen presented the project to the BAR at its meeting Tuesday.

“We think of it as a gateway property into the downtown area,” Davies said.
Tarleton Oak LLC also owns five houses on Lexington Avenue that are in the Martha Jefferson historic district.

“They obviously feature prominently in the conservation district guidelines and the desire first and foremost to retain those residential properties as part of the character of the neighborhood,” Davies said. “But looking directly behind those properties, you’ll notice that there are several surface parking lots.”

The property is within the Downtown North zoning district, which means that no further approvals by the City Council are required.

The site plan shows a “linear parkway” that would provide a way for people to walk between Maple and East High streets.

“One of the things that has been a driver from the beginning is pedestrian permeability through the site,” said Andrew Moore, with Glavé and Holmes Architecture.

“It’s intended to be a fairly simple design with a series of punched openings informed by some of the more traditional architectural elements in the area, not unlike Tarleton Square and other buildings in the area,” Moore said.

Both phases of the project would take up almost an entire block. The exception is 801 E. High St., an individually protected property known as the C.D. Fishburne House. The Core Knowledge Foundation is headquartered there.

“We’re going to be surrounded,” said John Ballen, the group’s chairman. He said he was concerned construction might cause damage at his building, which city records say was built in 1880.

Ballen said he is “reasonably supportive” of the project but hopes the effects on his building can be mitigated through design.

Davies said the project would respect the character of its neighbor.

“North Downtown is a patchwork of large and small buildings and you see that pattern all of over the area,” she said.

Balut asked what the plan is for the five historic homes on Lexington Avenue. Until a few years ago, they had been used by Martha Jefferson Hospital.

“When we bought them, we converted them back to residential space and they are all rented to families and we plan to keep them,” said Jennifer Feist, of Tarleton Oak LLC.

Feist said one of the corners will be used as a small market for the neighborhood and the office building.

“I really want this to be a permeable project where people feel good about walking through it,” she said.

BAR member Carl Schwarz said a lot of improvements could come with this development.

“You’ve got a gravel parking lot that goes right up to the back of those houses right now and it’s going to become a nice pedestrian way,” he said.

Balut said he encouraged places for the public to sit as well as retail uses. He added that he would like to see something done to cut down the massing of the parking structure.

The BAR approved a certificate of appropriateness for phase one of the project.

The BAR also approved a certificate of appropriateness for a modified landscape plan for the Dinsmore Inn at 1211 W. Main St. That document had to be modified after some trees that the BAR had required to remain were damaged by construction.

The Dinsmore Inn also received a certificate of appropriateness for a temporary tent that will be erected over the rear terrace during the summer months.

“The tent provides much-needed protection from the sun and rain during the hottest months of the year for both customers of the restaurant and customers of the Dinsmore Inn,” said Ryan Hubbard, of the company that owns the inn and the Farm Bell Kitchen. “The tent cannot be seen from West Main Street and will serve as a temporary solution until we are able to propose a permanent structure.”

BAR Chairwoman Melanie Miller noted a certain irony: “We didn’t need protection from the sun before all the trees came down that covered the patio.”