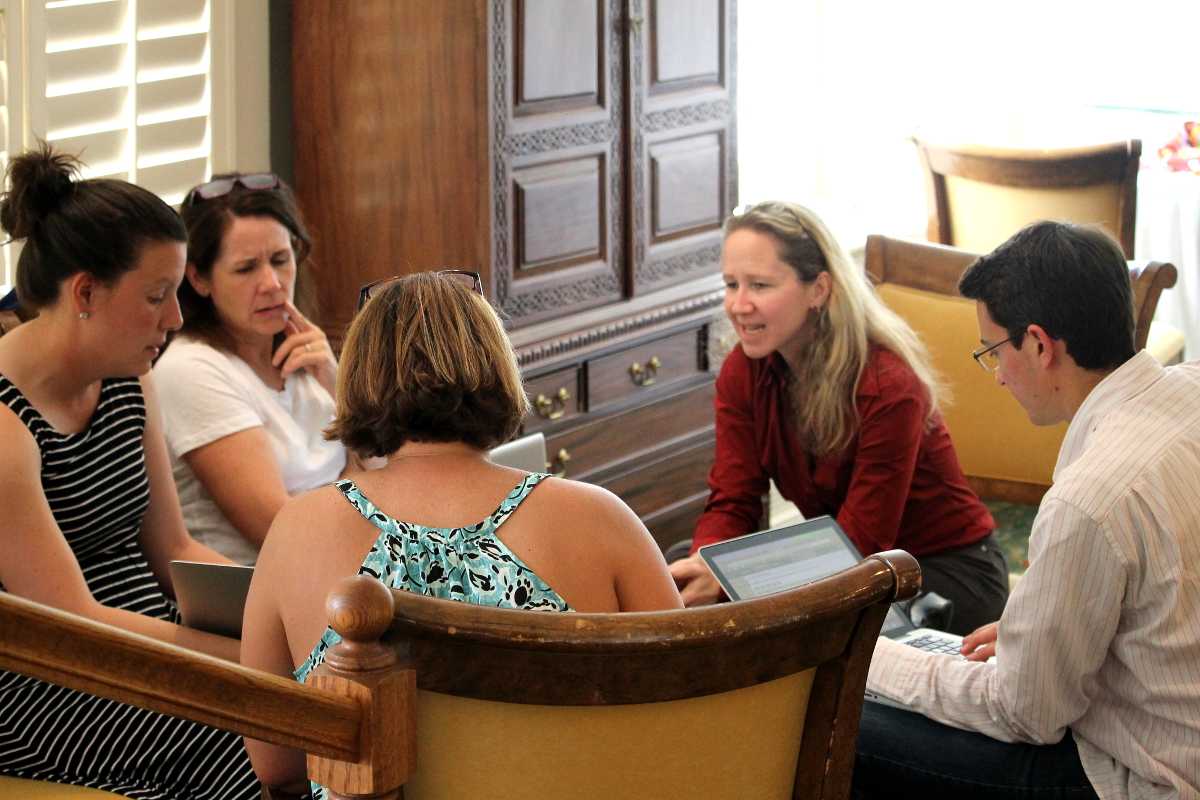 Dr. Amanda Gonczi discusses a lesson plan with a group of teachers at the PEF Innovation Institute

While their students get in the last few weeks of summer vacation, two dozen educators from Charlottesville and Albemarle County public schools are creating project-based, inter-disciplinary lesson plans.

Since the Public Education Foundation of Charlottesville-Albemarle’s three-day Innovation Institute began Tuesday at the Greencroft Club in Ivy, the participating educators have had the chance to work together to explore new and engaging instructional techniques.

Each day of the institute started with an introductory lesson led by Amanda Gonczi from the University of Virginia’s Curry School of Education.

“This morning we were focusing on technology integration and cross- versus inter- versus multi-disciplinary lessons,” Gonczi said. “Teachers shared what those terms mean to them, and then we came to a common understanding of what the terms mean in educational literature. Then we spent about an hour on how they could apply this within their grade.”

A cross-disciplinary lesson, for instance, might involve a concept from an environmental science class being expanded upon for a social studies class. Inter-disciplinary lessons, on the other hand, would involve coordination between two areas of one general subject, such as life science and geology.

Gonczi led the teachers through creating a rubric to identify opportunities for these kinds of lessons. In the afternoon, they moved into breakout groups to create actual lesson plans for use during the upcoming school year.

“It’s nice that now is more of a dedicated time for this. Lesson planning during the year is crazy and rushed, so this allows us to really focus on it,” added Calder McLellan, of Burnley-Moran Elementary.

Another pair of teachers worked on a specific lesson on renewable and non-renewable resources for third- and fourth-graders. Lisa King of Hollymead Elementary said she would start by discussing the real-world relevance of the material.

“We’re focused on which resource would be the most efficient if it was the last left in the world,” said King. In this way, she explained, she can preemptively answer the question of why it’s important to learn about solar energy.

The lesson itself involved constructing a solar-powered Lego car after using a computer simulation to understand how a solar battery actually works.

“Teaching 8-year-olds, we’re getting into their world with the game, with the Legos,” said Sarah Laprade, also from Hollymead.

King noted that the lesson also would involve simple machines, math and writing. By combining disciplines in one lesson, she said she thinks a day’s learning can be less compartmentalized.

“We don’t have to stop and do new direction, like when we have science from 8 to 9 a.m. and then move into reading groups,” King said. “You can work all day long with different aspects of one overarching lesson.”

Bethany Robinson from Brownsville Elementary School echoed the fact that this kind of hands-on lesson planning can be difficult during the school year, noting that creating one lesson can take more than two hours plus time for trials and modifications.

Robinson explained the inquiry-based activity she was working on alongside an instructional coach from Albemarle and another third-grade teacher from Brownsville:

“Yesterday we developed a unit where we discuss how the sun is the source of all energy on Earth. Today, more specifically, we’re developing an activity where they measure the heat of surfaces with a laser thermometer,” Robinson said. “We’ll be taking things outside and watching them change, then incorporating math by checking the temperature multiple times and graphing that.”

All three educators working on that lesson agreed that this type of activity built on the lessons they already use in a way that demonstrably increased student engagement.

“We’re working hard trying to develop the skills needed to do these [types of lessons] more regularly. It takes a lot of practice to change methods,” said Robinson.

As Gonczi went around the room checking on the groups’ progress, several teachers described the simulations they planned to use and the ways they were making lesson plans more appealing to students. One group discussed how the plans they created during the institute could be shared with their colleagues, as well.

Gonczi emphasized the importance of collaboration, noting that many teachers already use innovative performance-based assessments and technology resources. The Innovation Institute, she said, offers them the time to share what they have found especially useful in their own classrooms.

Sharon Deal, executive director of the Public Education Foundation, expressed gratitude to those who have supported the foundation’s innovation fund and made events like the institute possible. The institute’s sponsors included the UVa Community Credit Union, Woods Rogers, the Greencroft Club and numerous anonymous donors and community members who contributed to the foundation’s National Teacher Appreciation campaign.

Overall, participants said they appreciated the dedicated time for lesson planning and the opportunity to work across school divisions.

“It’s so nice to work with people from the county since there’s really not much collaboration on the level of teachers,” Martin said.