Charlottesville’s Police Civilian Review Board sent an ordinance outlining its powers to the City Council. Here’s what’s next. 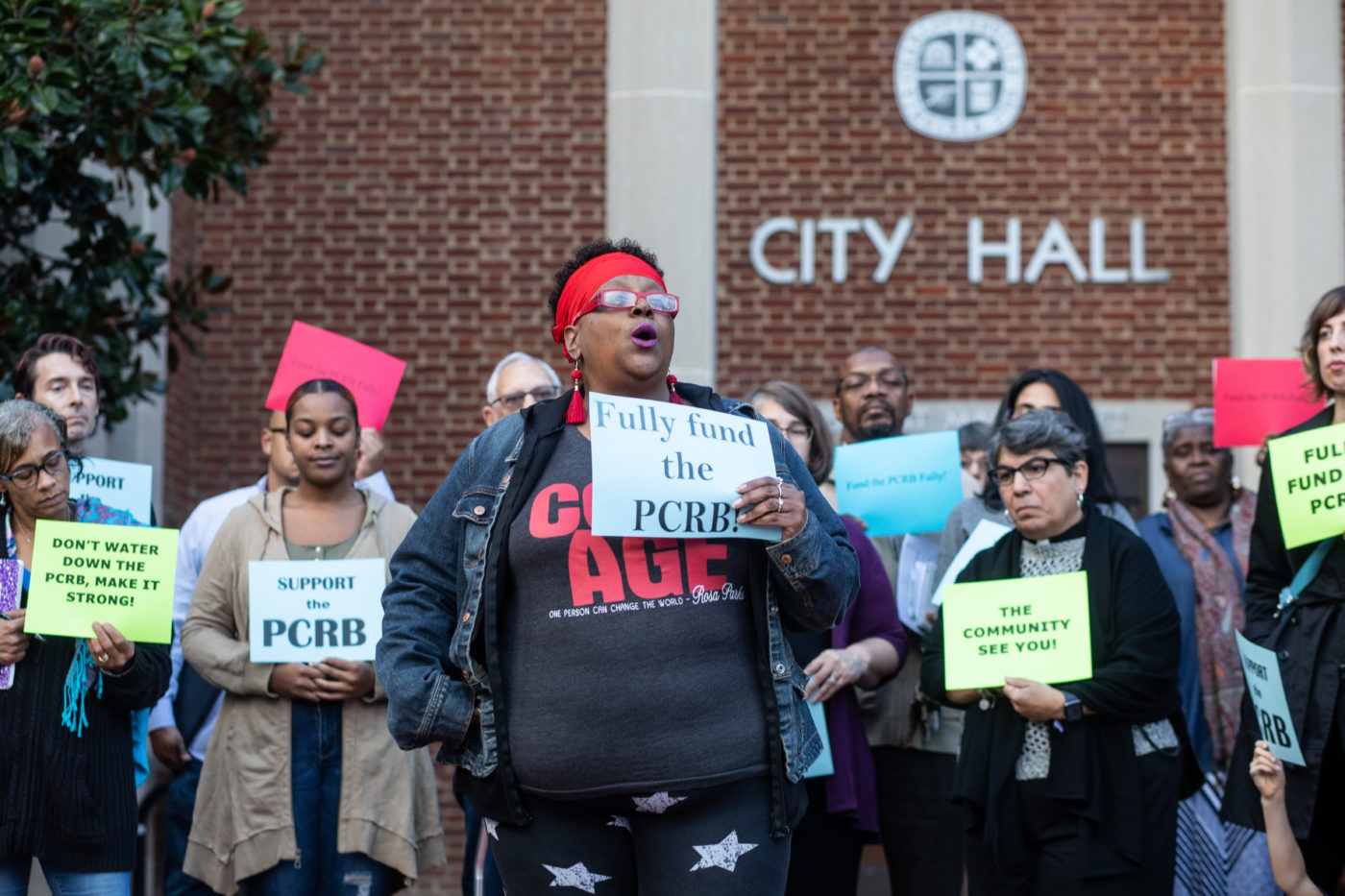 Rosia Parker, a member of the initial Police Civilian Review Board, stands along with other members of the People's Coalition outside of City Hall on Oct. 21, 2019, ahead of a Charlottesville City Council in which it was scheduled to have a first hearing on the CRB's bylaws.

A yearslong process to establish an operational Police Civilian Review Board in Charlottesville is at a new “step one” because new powers outlined in state law are not yet in the hands of the board.

Earlier this month, the PCRB approved an ordinance that can grant the board subpoena and investigatory power along with the ability to make disciplinary recommendations, but it still has to be approved by the City Council.

While new state law granting civilian review boards expanded powers took effect this July, Charlottesville’s must first pass an ordinance to establish those new powers. With the PCRB endorsing it, the document will next surface on a future City Council agenda this fall.

Following council approval of the ordinance, the board still needs to formalize its operating procedures. Additionally,  the city manager still needs to hire an executive director who will serve as a liaison between the board and city staff.

As for when the board can start using new powers and operating as it intends to, it could be several months away, Mendez said.

“Realistically, I think this will be a matter of months and we should be very cautious because the last time when the interim board reached this point, that was when the real conflicts arose,” Mendez said. “People sort of decided that now was the time to say, ‘no we’re never going to approve this’ or ‘that’s not what we thought at all.’”

Former PCRB member Sarah Burke was among the inaugural board tasked with drafting bylaws. At the time, the board had fewer teeth, as the new state law granting expanded powers to civilian review boards was not yet in place. As a Dillon rule state, certain authorities by localities within Virginia have to be approved by the state’s legislature.

“We made a proposal that was strong, given the law, with the ability to review complaints and hold hearings,” Burke explained.

In addition to the executive director position that the city is currently hiring, the initial board hoped an auditor could be hired, as well.

That was late 2019, and at the time, the City Council — which has turned over three seats since then  — approved the bylaws with changes.

Burke said the “clear sticking point at the time was that they were not prepared to hire two staff people and decided to focus on the executive director.”

Mendez said the current board and council have had discussions about to what extent they needed to have procedures in place before proposing the current ordinance to use new state laws.

“The idea is that this ordinance is kind of as stripped down as we can make it while leaving as much wiggle room for us to argue about procedures as is necessary,” Mendez explained.

According to Councilor Lloyd Snook, the city hopes to have a PCRB executive director hired and working by the beginning of October.

Snook also said the city hopes it can use an Oct. 26 work session to discuss the ordinance and consider it fully by the Nov. 1 meeting.

“Whether we would vote on it then depends, obviously, on the comments we receive, and whether it needs just a few tweaks or significant reworking,” Snook said.

Aside from the current ordinance, Mendez also said that the operating procedures can better clarify at what frequency and circumstances the PCRB will investigate complaints.

“Right now, all it said is that we may choose to investigate complaints. It establishes that power,” Mendez said. “Then the operating procedures will say, you know, ‘the board may initiate an investigation under the following circumstances … bing, bing, bing.”

Meanwhile, Burke notes the steps ahead from the work the past and present members of the board have been doing.

“If I could push for anything, it would be for people to pressure [the] City Council now to pass the ordinance as it is and recognize that so much of the meat is in the operating procedures,” Burke said.  “[Operating procedures] will be heavily scrutinized and well-discussed publicly.”

“This is step one,” she added of the ordinance. “But the most important thing to notice is that none of these powers can be utilized until operating procedures can be passed.”