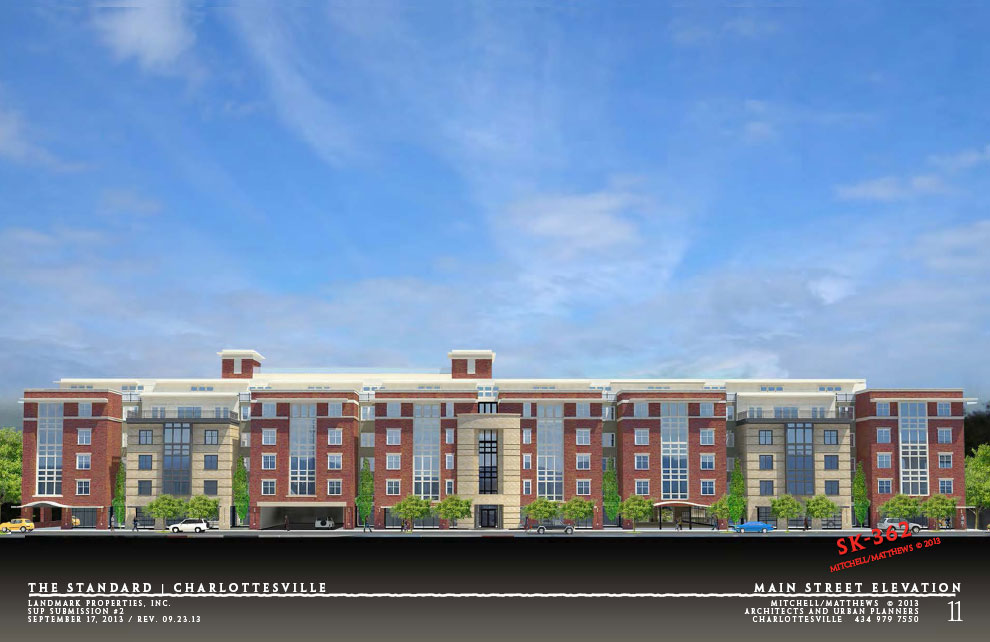 An apartment complex that would put more than 600 bedrooms on West Main Street has moved one step closer to becoming a reality after the Charlottesville Planning Commission recommended approval of a special-use permit last week.

Georgia-based Landmark Development next needs the City Council to approve the permit to allow the project — known as The Standard — to have additional height and density.

After more than three hours of discussion, the commission recommended approval on a 4-2 vote at its meeting Tuesday.

Fifteen people spoke during the public hearing. The majority were in favor of the project because they saw an opportunity to increase pedestrian traffic on West Main and increase property tax revenues for the city.

Keith Rosenfeld, the owner of HotCakes, said he has been watching development on the West Main corridor closely.

“We all took a step forward in approving the Flats at West Main,” Rosenfeld said. He added that he hopes he will someday open a second HotCakes somewhere on West Main.

“To date, it has always been too risky to invest in the area, but based on what happens here with this project, I think that might change,” he said.

Some residents of the Westhaven public housing complex, located directly behind the development site, also came out to offer their perspective. Landmark representatives have held three meetings to get feedback during the planning phase.

Westhaven resident Joy Johnson was present at those meetings. She expressed her appreciation to the developers for taking the time to sit and get feedback from the neighborhood, which she said had not been a part of the process by other developers.

However, another resident was concerned the project would not have any affordable housing units.

“If you are going to build on top of a public housing site, why wouldn’t you put affordable housing there?” asked Deirdre Gilmore, a lifelong resident of Westhaven.

The variety of public input prompted a debate about the potential benefits and damages from the development. Commissioners were split on whether The Standard was consistent with the city’s Comprehensive Plan.

Commissioner Genevieve Keller, who voted against the special-use permit, said she believes the proposal does not follow the city’s vision for mixed-use development along West Main.

“I am not opposed to housing on West Main Street,” Keller said. “But I see this as a tipping point to make West Main Street a place for undergraduates, and not for our entire community.”

Commission Chair Dan Rosensweig said he thinks there were many areas in which the application did meet designations of the Comprehensive Plan, such as increasing pedestrian and commercial activity. He also expressed appreciation for the design of a permanent pedestrian access between Westhaven and West Main, in response to concerns voiced earlier in the process.

The commission’s approval included additional considerations and recommendations that will be passed on to City Council regarding parking, retail space and funding to Westhaven.

The commission approved the proposal for 499 parking spots in an on-site parking garage, with the condition that any unused parking spaces will be available to the public. Landmark also will finance a traffic study on West Main Street to determine whether a traffic light would be required at the parking garage entrance. If the study determines that signalization and pedestrian walkways are necessary, Landmark agreed to pay for them.