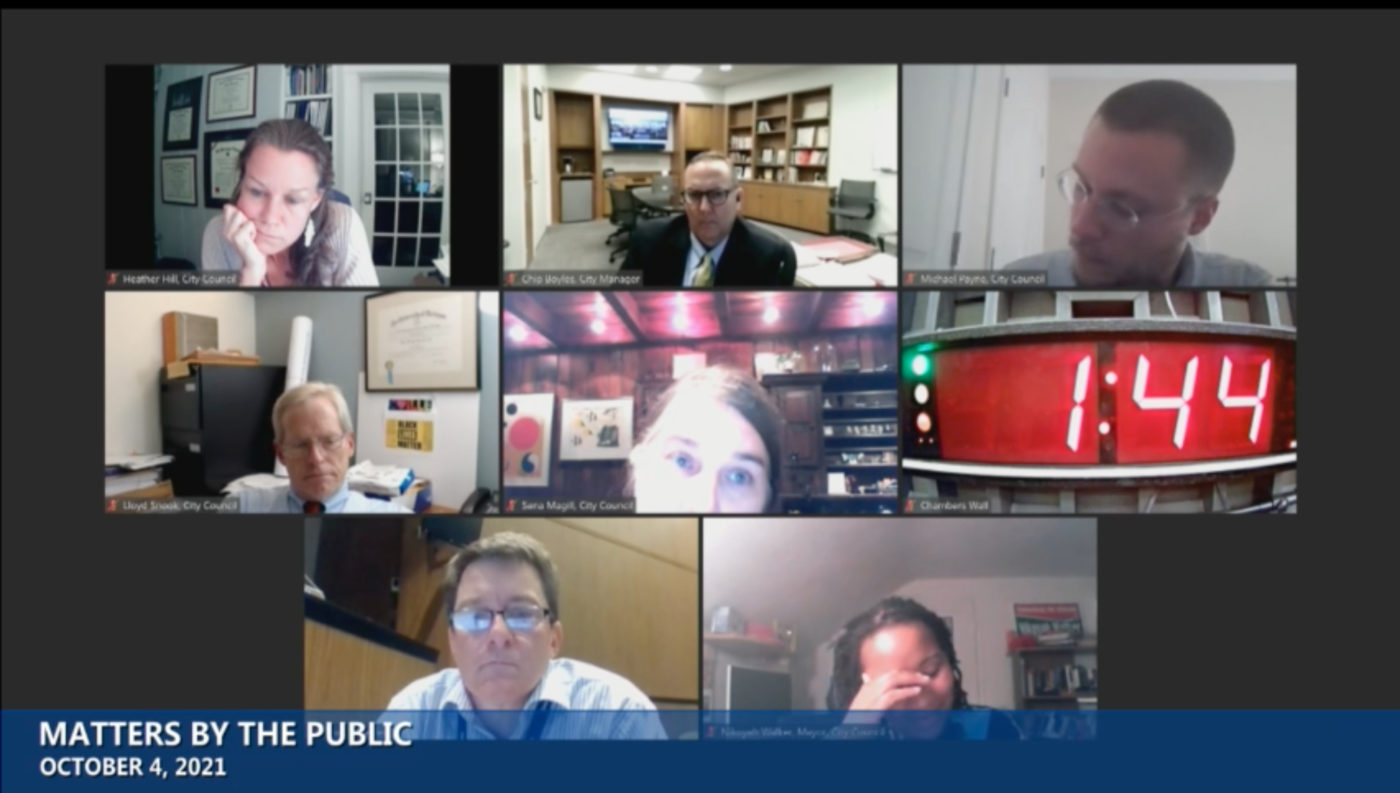 That is an unprecedented level of turnover in the city’s top position — and the upheaval is not limited to the city manager’s office.

And those are just the leadership positions.

The intense turnover has reached a level that it could start to have major implications for the community — both right now, and long into the future.

“There’s no need to sugar coat it,” said Payne, who was sworn in for a four-year term in January 2020. “It is certainly very possible that additional people [employees] leave the city. I think we’re very much in a situation where we have a government that can barely function. And that has enormous consequences for the community.”

It’s not altogether uncommon for a local government to experience this type of instability, said Charles Hartgrove, the director of the Virginia Institute of Government at the University of Virginia’s Weldon Cooper Center for Public Service. And when it does, the first major issue a government will experience is an inability to execute long term plans.

“When you’re looking at strategic planning in the organization, the long term goals that the elected body has set out, someone sitting in the chair as the chief administrative officer can carry out the vision for council,” Hartgrove said. “Most communities that have a high level of turnover in that top position or top positions, it’s going to be really challenging to implement a strategic vision, and turn that vision into actionable goals and items that can be accomplished.”

“I think the situation is so bad, that the ability to put together a strong annual budget to maintain basic government services that are often taken for granted, that are even outside of the policy side, are in danger,” he said.

Budget season is coming up. City council and staff have scheduled a number of work sessions to begin planning for the budget process, but Payne said he’s not sure if there’s enough staff capacity to have those important sessions in the detail the city needs to put together a strong and effective budget.

Figuring out how to fund the long overdue school reconfiguration — a massive, complex and important project — requires a level of planning and oversight detail that in turn requires adequate staff, Payne said. Same with phasing out the natural gas utility, expanding solar power in government buildings, offering incentives for green retrofitting — all things citizens have been pushing for, and that the city wants to implement — but without a coordinator to create those programs via a climate action plan, without “staff to do it, it’s not going to happen,” said Payne.

The affordable housing plan is a perfect example, said Payne. It’s “a great plan with great policies,” one that outlines funding levels, makes recommendations for hiring and organizing new staff, one that intends to address the dire (and growing) affordable housing crisis that affects more citizens every day.

“We have this great plan, but no ability to figure out how we’re going to fund it, how to implement new programs it recommends,” Payne said. “Which staff member is in charge of it? Which department does it go to? Does it have a director? How is that department going to work with the city manager’s office? How are they going to take this policy directive and turn it into policy? You’ve got this plan and a desire to do it, but it’s impossible to do in this environment.”

Dysfunction within the city could spill over into other governing bodies. The Charlottesville City Schools, for example, needs the city in a number of ways. Much of its budget comes directly from the city. The city also handles pupil transportation.

“The foundation of the School Board’s work with the city is relationship,” said City School Board Chair Lisa Larson-Torres. “We meet throughout the year to collaborate and work closely with city government, especially as it relates to budgetary decisions for school operations, facilities management, etc.”

That relationship is key to the overall success of City Schools, to improving and maintaining the quality of education and care the schools can provide their students, said Larson-Torres.

“And just like any relationship, when there’s turnover or dissolution of the relationship, it means you may have to start all over again,” she said.

Building any kind of stable relationship will be difficult right now, Payne implied. The city is “in a triage mode.”

“They have to focus on keeping the bare bones of government, the things you absolutely must do, running. That expends time, energy, resources, and then there’s none left” for the big things, said Payne.

People tend to take the functionality of city government for granted, he said. “It is not impossible for local governments, for a temporary period of time, to fail like a business would,” i.e., become so dysfunctional that it cannot function.

“I don’t mean to be too alarmist,” said Payne, but the situation is severe, particularly because the effects could be long-term.

‘It depends on where you sit’

The way this breakdown affects any given individual will depend largely on the level of engagement they have with the city government, said Charlene Green, deputy director of the Piedmont Housing Alliance nonprofit.

There are some people who will not see any, or much change, said Green, who previously served as the manager of Charlottesville’s Office of Human Rights and led the Dialogue on Race (a city-sponsored project that began in 2008 and sought to improve race relations throughout the community). They can get to work just fine. Their gas and water still operate, streets are cleaned, trash is picked up.

But people who depend on the social services the city provides could have a very different experience.

“When you are engaged with the city on what may seem like a superficial level, you may not see the deeper impact below the surface for those folks who may receive social services, or depend on assistance through the Office of Human Rights, or from the police department, or any of those,” Green said.

“And again, it depends on where you sit,” Green continued. “If you are part of the population where issues that have always been a concern for you have not always been addressed in the ways that you have felt like you deserved them getting attention, whether it’s for people who identify as a Black or brown person, or someone in a low wealth area, someone with a disability — these are ongoing issues that really have a level of impact on your hope for anything changing or getting things done.”

Sometimes, she added, that hope is really what keeps people hanging on.

City government influences so many foundational community things — education, the criminal justice system, housing, just to name a few — that “there is a need to hope that those institutions stay focused and do the right thing, so that level of uneasiness doesn’t make [people] feel like things are crumbling around [them],” said Green. It’s imperative for the community to be able to have confidence in public programs, she said.

Lack of confidence in the city government can have other cascading effects, the Virginia Institute of Government’s Hartgrove said. A reputation for high turnover tends to scare away talented people from joining city staff as employees — or, crucially, leaders.

Several council members have already raised concerns about whether the city will be able to attract talented applicants to top jobs.

“Every organization is made up of people, that’s what drives it,” Hartgrove said. “You want to have consistency and for your organization to be known as a good place to work.”

At some point, that bad reputation can spill into the general public.

Ty Cooper, a local entrepreneur, filmmaker, and founder of the Black Business Expo, said that changes within city government are to be expected — to an extent.

“It’s one thing when you know there is a change in government due to election years and natural turnover, but it’s another when the one thing you can expect is constant change due to any form of dysfunction,” he said. “Then that’s a problem.”

Cooper hasn’t noticed a change in his Lifeview Marketing and Visuals business due to the City Hall turnover and controversy, and that may be true for other local business owners as well. But it certainly matters: “An unstable local government is synonymous with an unstable market. If you cannot trust the city to have a solid foundation, then faith in the market can never truly exist,” he said. “Hopefully with new leadership comes a new mindset and ideas for continuity.”

Despite the instability, Piedmont Housing Alliance’s Green said, “we need to be very purposeful in making sure we don’t forget all the positives that are coming out of not just local government, but all of the community partners, the stakeholders who are trying very, very hard to focus on doing the right thing.”

Diminished trust in local government is “probably the biggest impact” of all of this, Green said. “And that’s not to say that it’s just about one aspect of city government, whether it’s elected officials or staff. It’s that overall feeling.”

“And the feeling right now,” said Green, “is not as positive as some people would like it to be. I’m not in City Hall, so I can’t speak to all of what’s happening behind the scenes. But as a resident of the City of Charlottesville, it feels like you’re not sure what’s going to happen next.”

Jessie Higgins contributed to this story.