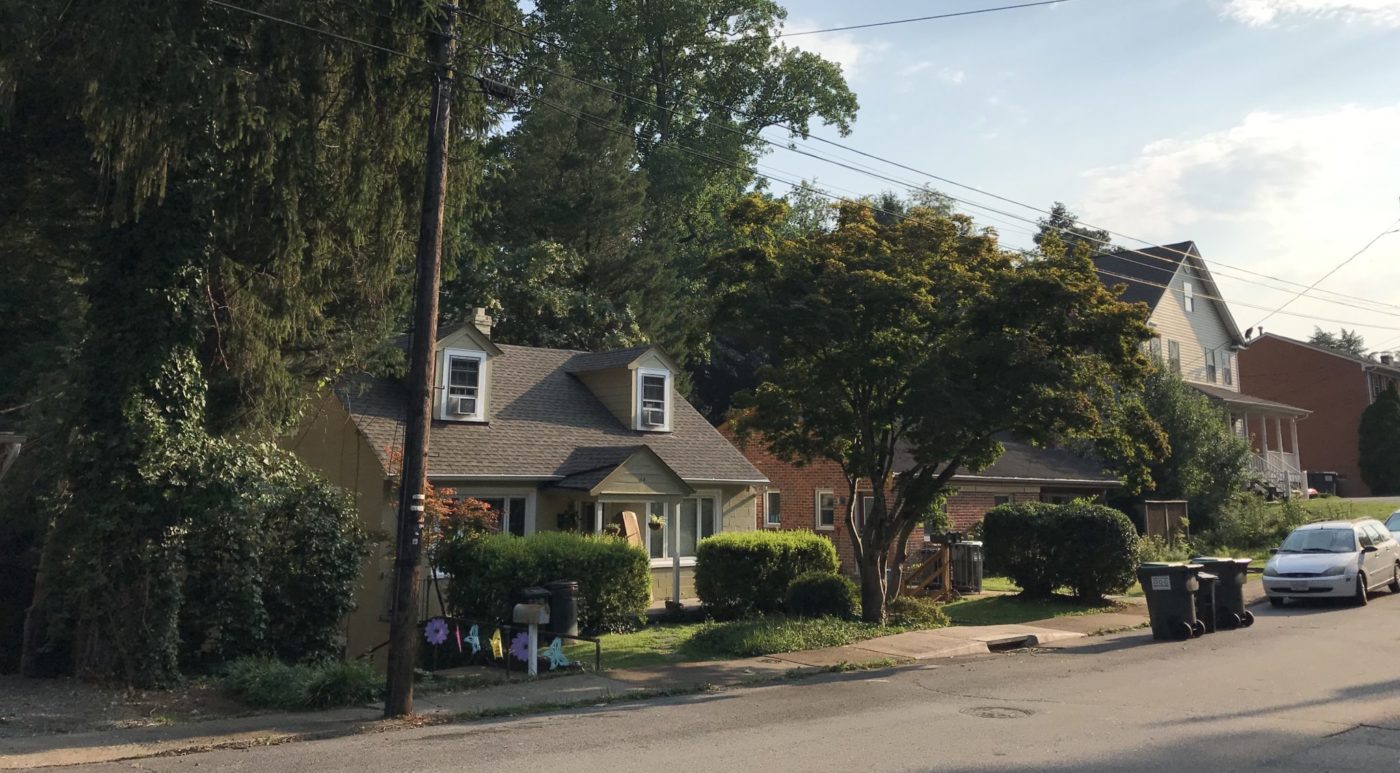 Raymond Ave., in the Fry's Spring neighborhood, has a few different types of housing, including a number of duplexes.

But there’s still work to do.

The comprehensive plan update has been a yearslong process, one that is years overdue, city councilor Michael Payne pointed out in an interview with Charlottesville Tomorrow. And that while getting policy right is important, it’s also important to take action. “At some point, we have to make a decision.”

At this time, city council is scheduled for the first of two public hearings on the plan Nov. 15.

For a deeper look at the “sensitive community areas” and more, view the full presentation here.

Speaking for himself and not for the planning commission as a whole, commission chair Lyle Solla-Yates said in an interview with Charlottesville Tomorrow that ultimately, he wants to see the comprehensive plan reflect the priorities voiced by the community: racial equity, affordable housing, and climate change action.

Solla-Yates mentioned the vast number of community comments he, other planning commissioners, city councilors, and the consultants have received, not just from individuals but via email campaigns organized by groups like Livable Charlottesville, Citizens for Responsible Planning, and the Charlottesville Low-Income Housing Coalition.

“We should listen to everyone, but understand that there are differences between them, in my view,” he said. “Something that we’ve been pushing the consultants to give us, and they have given us, is a breakdown of who we’re hearing from. Which, we’ve been able to slice up that data to understand that different people are saying different things, which is not a shock. The key differentiator seems to be homeowner versus renters. Renters want help, they want change,” he said.

Homeowners vary by income, said Solla-Yates, and from what this data has shown and what he has heard through public comment, any homeowner making less than $150,000 per year is worried that the current system isn’t working for them. To his understanding that is correct. But those homeowners making more than $150,000 per year are not worried and do not want change because the current system is working for them. “And I believe they are also correct,” Solla-Yates said.

Solla-Yates also wants to remind folks that the affordable housing plan, a set of goals, priorities and strategies for improving housing affordability and reducing inequities in housing availability, conditions and ownership, exists. It’s not secret, it’s not new, “and it is a useful working document,” one supported by ample data and research conducted over time.

Payne also pointed toward the affordable housing plan, emphasizing that it is a crucial part of the comprehensive plan. “Of course, we have to fund it, but, the plan itself is a very strong plan.”

He hopes the plan as a whole will include economic development strategies geared toward community wealth building, such as community land trusts, co-ops, community gardens, public housing development, and more, and that they’ll all connect to build wealth, close the wealth gap, particularly the racial wealth gap.

As far as the FLUM, Payne wants to see it address barriers to housing access (rental and homeownership) and to address past, but still very present in many ways, redlining practices, to “have it be a tool that can address that issue and provide more housing to people.”

“Again, the zoning and the land use map are just a small piece of the overall housing challenge, and it’s important, but, maybe even more important will be actually funding and implementing the affordable housing strategy and really looking at tools like community land trusts, looking at the root problem of who owns land, how to open up ownership of land to more people, how we can look at community land…making sure that we look out for folks who are at 30%, 60% AMI, etc. Zoning is not going to fix the problem or by itself provide affordable housing to those in need.”

At Tuesday’s meeting, urban planning consultants with Rhodeside & Harwell, Inc., proposed a few changes to the draft Future Land Use Map that they presented in August, based on feedback given by commissioners and councilors during the August 31 Planning Commission work session.

During that session, commissioners and councilors asked the consultants to seriously consider implementing the affordable housing overlay to the FLUM suggested by the Housing Advisory Committee. The suggested overlay ties increased density and intensity to affordability, so that building more housing in the city could bring about more truly affordable — and not just market-rate — housing.

The RHI consultants have now proposed taking the ideas and a few specifics from that affordable housing overlay and baking it into certain land use categories for what they’re calling “sensitive community areas.” As defined in the presentation slides, the “sensitive community areas” are those “areas with community members sensitive to displacement pressures, high numbers of non-white individuals, and/or high numbers of households with an annual income of less than 30% AMI” (for more on AMI, or area median income, refer to our equity glossary).

Ron Sessoms, a planner with RHI, thought that incorporating the principles from the overlay into the FLUM land use categories, instead of having the overlay separate from (but related to) the FLUM, “would be a better approach,” because the latter adds an extra layer of complication onto the zoning.

Other commissioners and councilors agreed that these particular policies of tying density to affordability should happen throughout the city, because there are some places that aren’t considered sensitive community areas based on the Census block data RHI has used to define those areas, but could be. For instance, Riverside Ave. in Woolen Mills has a public housing community of deeply affordable and subsidized duplexes (managed by the Charlottesville Redevelopment and Housing Authority) on one side of the street and some newly-built and newly-renovated, much more expensive homes on the other.

Of course, other topics came up in the five-hour meeting, such as best practices on protecting historic districts and districts that will be eligible for historic designation soon; whether or not this version of the FLUM potentially allows for too much density too soon; whether or not it’s good land use policy to move potential density away from wealthy residential areas just because those folks were loud about their displeasure.

Mayor Nikuyah Walker asked, too, for more clarity on the term “affordable housing” in the comprehensive plan. It’s a conversation that’s not clear, as evidenced by public comments, and it means something different to everyone, she said. “We need to define it, for us, in our community.”

More than 100 people tuned into the meeting, and a number of them spoke during the public comment period, reiterating many of the same points that have come up in various planning commission, city council, and Cville Plans Together meetings.

Multiple times throughout the meeting, consultants, councilors, and commissioners talked about how the FLUM is important, but it is but one tool that Charlottesville can use to tackle the ongoing affordable housing crisis, and it will be necessary to use other tools (like strong zoning, housing subsidies, developer incentives, etc.) to attempt to fix the problem at hand.

And the hardest part — the zoning rewrite — is yet to come.

“We are, in this particular instance, leaving a lot of challenging questions to the zoning ordinance,” said Lee Einsweiler of Code Studio, the firm that will be working with RHI and the city on the zoning rewrite. “It will offer up express details for a lot of these questions on a lot to lot basis,” he added.