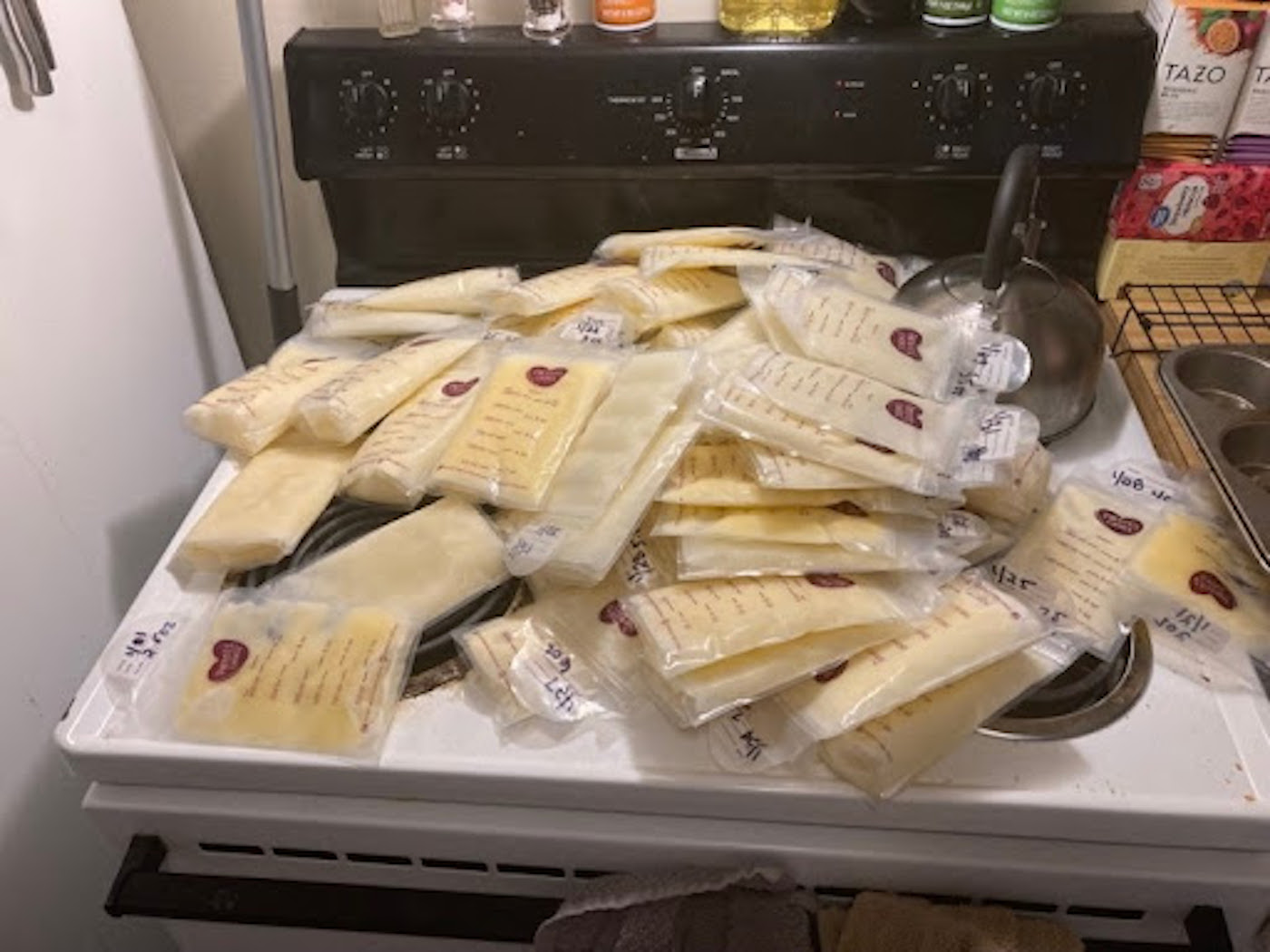 Haleigh Dunn Stephens produced so much milk for her second child, she could no longer store the excess in her freezer.

Haleigh Dunn Stephens’ freezer can no longer house the breast milk she pumps.

The mother of two produced about 40 ounces a day at the peak of her breastfeeding. She couldn’t store it all. Rather than disposing of the milk, Dunn Stephens went to Facebook in March to advertise it to other families in need of food.

Her overproduction could not have come at a more crucial time; she was offering milk right as baby formula was quickly disappearing from store shelves.

“I have the opportunity to fill a fundamental need for a baby to be fed,” said Dunn Stephens. “If I can pump and help alleviate a parent’s anxiety or worry about how they will feed their child, I’m happy.”

With a severe national shortage of baby formula, demand for breast milk from people like Dunn Stephens is increasing around the country. Milk banks are selling out and parents are turning to social media to search for it. Soon, there will be a simpler way.

Two women in Charlottesville created a mobile app to connect mothers with excess breast milk nationwide to other families who need it.

Celia Castleman and Kelly Cox designed the app, which they named The Drop, to share exclusively human breast milk. The Drop allows parents who are overproducing, or have time to pump more milk, to distribute their excess to parents who are in need.

Breastmilk will always be in supply, the founders said. They wanted to elevate a form of feeding that isn’t reliant on factories or subject to shift due to crises.

“We have to take care of each other,” Castleman said. “Especially during these types of crises, which seems to be happening at rapid speed.”

The Drop, an app created by Castleman and Cox, began as an idea to aid parents in times of crisis — like the COVID-19 pandemic and the ongoing baby formula shortage.

In fact, the baby formula shortage exacerbated the launch of the new app. The founders intended to release the app during World Breastfeeding Week in August. Now, they’re shooting for the beginning of July.

“I was especially frustrated because, I was like, ‘We needed this yesterday, we needed this last month,’” said Castleman. “But because of the attention, it’s gotten to be a necessity to make sure all babies have access to food. This is, like, a primary base need.”

The Drop, an app for sharing breast milk, is set to launch at the beginning of July.

As of May 1, about 43% of baby formula was out of stock at U.S. retailers, according to product-data firm Datasembly. The baby formula shortage was caused in large part by the closure of an Abbott Nutrition plant in February. That closure devastated the supply chain, which was already running short because of the COVID-19 pandemic.

Local stores struggle to stock baby formula amid a national shortage, leaving parents to search for formulas that work for their infants

The app comes at no cost for its users. So does the milk.

The founders wanted to aid as many parents as possible, and decided to require parents who give milk do so for the purpose of community aid, and not making a profit, Cox said.

“There’s a very altruistic part of this where women who have extra breast milk just want to share because they know it’s what they should do,” Cox said.

Most health agencies warn parents against informal breast milk sharing. The Food and Drug Administration advises against it, citing safety risks. The American Academy of Pediatrics encourages parents to get human breast milk from regulated breast milk banks, where they can be sure the milk has been handled and stored properly.

Many milk banks prioritize babies in the newborn intensive care unit over other infants. When milk is made more widely available, it is rarely free. Banks typically charge three to five dollars per ounce. The closest milk bank to Charlottesville is located at the Children’s Hospital of The King’s Daughters in Norfolk, and charges four dollars per ounce of breast milk.

The app’s founders acknowledge that there are risks to unregulated breast milk sharing. They encourage parents to understand proper storage and to ask lots of questions before taking someone’s milk.

Frozen breast milk can be used up to 12 months after it’s been frozen, according to the Centers for Disease Control, while refrigerated breast must be used within four days of being pumped. The health agency advises parents to label the breast milk with the date it was pumped and frozen.

The Drop founders also urge parents receiving breast milk to know which allergens and diets — especially medications, vitamins and supplements — their baby can and cannot consume and confirm that the donor’s diet adheres to those guidelines.

“I know the risks, but I am also a person and a mom and human,” Freeman said.

Freeman has donated her milk to a number of families. She connects with parents through social media, on pages like Eats on Feets Virginia and Human Milk 4 Human Babies Virginia, which are some of the only current options for free milk sharing. She also donates to breast milk banks that deliver to babies in the newborn intensive care unit.

“I have tens of thousands of ounces of breastmilk that I’ve made,” Freeman said. “If there’s a family who is struggling to feed their babies, I will.”

Freeman intends to advertise her milk on The Drop, as soon as it launches.

Those using the app get something akin to dating app experience, but for breast milk. Users can choose whether they’re a donor, or recipient, and connect with other parents in their general area. No milk is distributed through Castleman or Cox.

Like popular dating apps, such as Bumble or Tinder, users can swipe on potential matches and filter their searches to find matches by distance, allergies and diet. Users are then matched with families with similarly-aged babies and can discuss exchange details.

As the app awaits its launch date, the two are working to find funders to help with development, user acquisition, trademarking and more.

The Drop is currently looking for beta testers to pre-populate the app. Those interested can email the team at info@sharethedrop.com.

“A lot of people don’t understand what human milk sharing is,” The Drop co-founder Cox said. “It’s been kind of an uphill battle educating people that this is an option you can do within your community.”