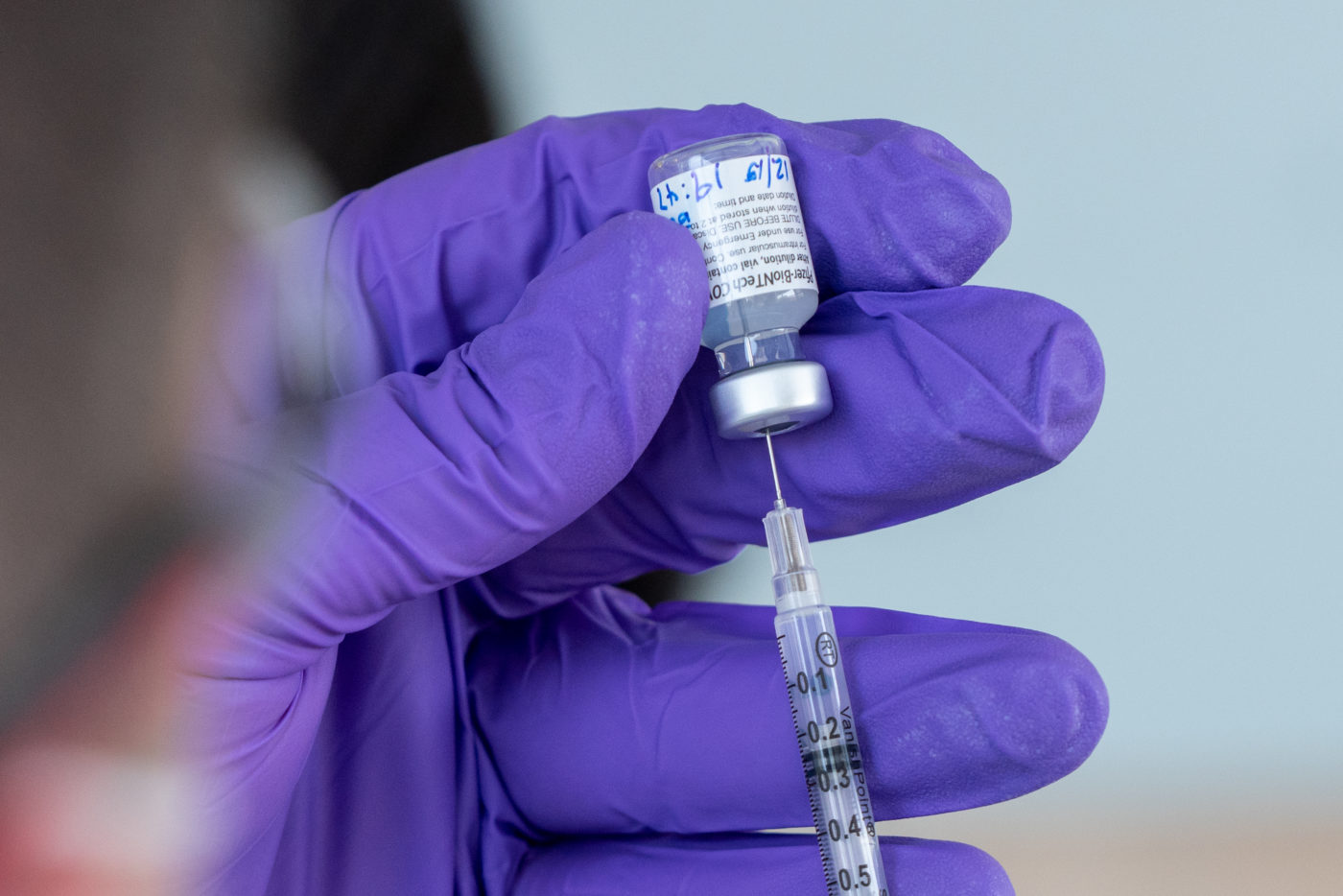 Latino residents in Charlottesville and Albemarle County are now among the most highly vaccinated racial groups in Virginia.

More than 60% of Latino people in Albemarle County have at least one dose, and nearly 50% are fully vaccinated. Charlottesville’s numbers are not far behind.

The figures dwarf percentages seen in other racial groups — including white residents. They also buck the national trend of Latino people lagging behind in vaccinations. And they lead the state, which has fully vaccinated only 31% of Latinos.

“A lot of the people I know have got the vaccine,” said Maria Ayala, speaking in Spanish. “I got it early through my job. Now, all my family is vaccinated.”

She stood beside a vegetable stand on a street corner in the Southwood community surrounded by other Latino residents. Several nodded in agreement.

“We’re all vaccinated,” a man called out from the other side of the stand, also speaking in Spanish. He proudly slapped his upper arm and then pointed to the people around him.

While it may be impossible to say with certainty why so many local Latinos have received the vaccine — the area does have one obvious advantage. It’s been part of an intensive vaccination campaign orchestrated by a new and highly active group.

He, a handful of his colleagues and a few other area nonprofits spent months deploying a carefully thought out information campaign with the singular goal of convincing Latino people here to be vaccinated.

They inundated the local Latino community with flyers and other media, made videos, posted to social media and visited people in the community.

For a community that was being ravaged by the coronavirus, the message was well received.

Like most families living in the predominantly Latino community of Southwood, Ayala has lost relatives to COVID. Her aunt died of the disease in Mexico. So did her grandmother.

She also knew people who became sick from coronavirus here in Charlottesville.

Cases among local Latino people were higher here than any other racial group. As of March, Latinos in the Blue Ridge Health District were 2.5 times more likely to become sick from COVID-19 than white people. Once they became sick, they were also more likely to be hospitalized — and more likely to die.

Those who died tended to be younger than other races. At the Medical Center, the median age of white people who died from COVID was 63, according to hospital data. The median age for Black people was 60. For Latinos, it was 45.

“That level of disease in the community has created some fear of the disease and perhaps more trust in the vaccine,” Luna said.

Still, there are other reasons why Latino people might not get vaccinated. Language barriers are one, Luna said. Access to vaccination sites is another.

So, as the Blue Ridge Health District entered its first phases of its vaccination efforts, the initiative began plotting ways to make vaccines more available to Latinos.

Beginning in early spring, UVA alongside the BRDH, started hosting clinics further in the community. First, they went to The Church of the Incarnation, where many Latinos attend, then later to Southwood.

“Dr. Luna brought his whole team,” Lurvin Melgar, who was vaccinated at the first Southwood clinic, said in Spanish. “So many people close to me and in my country, in Honduras, have died from COVID. So the fact that we have the ability to get the vaccine is a blessing, because the countries in Central America don’t have access. Thank God we do.”

The months of campaigning and clinic hosting have yielded incredible results, Luna said. But the work is far from over.

While COVID cases have dropped substantially in the Latino community, they’re still high compared to other races, Luna said.

The number of people coming to get vaccinated has slowed. The effort has reached the point where they need to target people who are hesitant.

The reasons for hesitancy look a little different in the Latino community than some others, Luna said. In February, the initiative convened a focus group of local Latinos to better understand that issue.

What they learned was no real surprise, Luna said.

Like other Latino people around the country, some here feared that the United States government would use the vaccination effort to deport undocumented immigrants. Others thought that the shot was a microchip. Still more believed the vaccine was killing people.

Luna believes that with more outreach, more people will be persuaded to get the vaccine.

With that in mind, the Latino Health Initiative plans to launch a new program called “Doses on the Go” or “Vacunas Moviles.” The program will operate in tandem with the BRHD’s new mobile vaccination clinic, which launched earlier this week.

The idea behind both is to meet people where they are — in neighborhoods and at workplaces — to offer vaccines and discuss fears.

“We’ve vaccinated so many people, what we have left over are the hesitant people,” Luna said. “So, we’re working on that hesitation, while working on convenience are our two main strategies. Continue working information, but really enhance convenience.”